NYT: The upcoming SCOTUS confirmation hearing could be a real game-changer — for Trump and the GOP 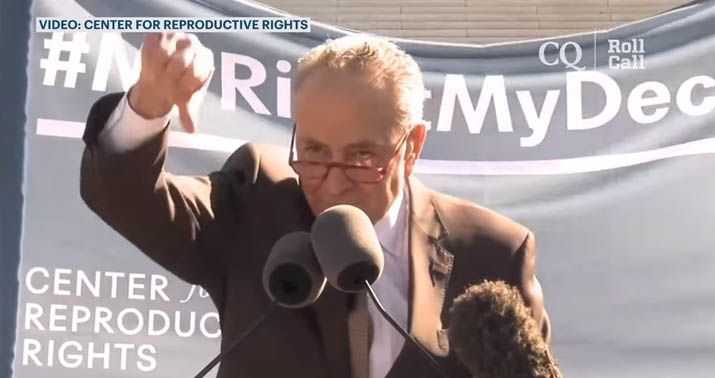 Tomorrow at roughly 5 ET, the nation will learn who Donald Trump will nominate to fill the opening on the Supreme Court. At roughly 5:01 ET, if history gives us any guide, every Democrat and liberal-progressive interest group will declare that person a threat to the Republic who must be stopped by any means necessary. That will create the kind of contentious confirmation hearing of the fever and pitch we saw in 2018 with Brett Kavanaugh, not to mention the confirmations of Neil Gorsuch, John Roberts, Samuel Alito, and so on.

With that expectation in mind, some Republicans and conservatives wondered whether it might be better just to skip the hearing altogether. Not so fast, the New York Times’ Jonathan Martin and Maggie Haberman write today. A Supreme Court fight might not win Trump any new voters, but it will change the conversation in a way that will only benefit him right before the election:

As President Trump prepares to reveal his Supreme Court nominee on Saturday, and Senate Republicans move to hold lightning-quick confirmation hearings ahead of the election, they are making risky calculations aimed at navigating difficult political straits with less than 40 days left in the campaign.

In order to achieve a new 6-3 conservative majority on the court, Republicans are poised to defy a clear majority of voters who have indicated in polls that they want the winner of the election to pick a nominee for Justice Ruth Bader Ginsburg’s seat. They are even willing to energize Democratic turnout in the short run by elevating issues like abortion, if it means achieving the long-term goal of tilting the court further to the right. …

They believe a partisan fight over the court offers them at least a chance to steer the debate away from political danger zones like the president’s handling of a virus that has claimed over 200,000 American lives and his unceasing rhetorical eruptions, most recently his indication that he would be unwilling to agree to a peaceful transition of power.

This has two flawed assumptions, and potentially one solid assumption. A Supreme Court fight in the same bloodthirsty, gladiatorial manner as the 2018 Kavanaugh hearings might galvanize some Democrats, but it might do more damage than any value it brings, too. And the idea that it might not convert more than a few votes to Trump is also a bit flawed. We’ll get to both in a moment, but this next paragraph lines up the bet that Republicans are laying pretty accurately:

If Republicans are skeptical that they can retain the presidency and the Senate in any election that is a referendum on Mr. Trump’s leadership, they are betting that Democrats will botch the confirmation process with ferocious attacks that make whichever woman he picks a sympathetic figure.

Yes, and we already have ample evidence of that potential. Democrats and progressives flipped out when Trump made the obvious choice to nominate a replacement for Ginsburg, and started threatening to pack the court the next time they had the power to do so. That forced some Senate Democrats to contradict that messaging, including Dianne Feinstein, who said that neither the composition of the court nor an end to the legislative filibuster was on the table. In response, a number of articles attacking Feinstein’s capabilities emerged since, as the NYT notes:

Senior Democrats are aware of the political hazards with Judge Barrett, and her biography in an election which the Catholic vote is crucial. That’s why some have started privately agitating, as first reported by Politico, for Senator Chuck Schumer of New York, the minority leader, to replace the 87-year-old Senator Dianne Feinstein as the ranking Democrat on the Judiciary Committee with a younger, more aggressive lawmaker.

“Agitating” is a good term to use here. The activists on which Democrats must rely in this cycle are agitating too, in favor of an all-out character assassination on whomever Trump nominates. The group Patriotic Millionaires demanded that Chuck Schumer launch such an attack even before the announcement by claiming that anyone who accepted such a nomination is “definitionally unfit to serve”:

You clearly lack the legislative power to stop the morally-bankrupt Republican hypocrites in the U.S. Senate from confirming a far-right ideologue to a lifetime appointment on the Supreme Court just days before the most divisive and consequential election in American history.

This unfortunate reality demands that you embrace the inescapable moral and constitutional obligation you have to use every power at your disposal to brand this corrupt process as the illegitimate farce it is and to discredit permanently the judicial fitness of any nominee who agrees to be a part of it. Any nominee willing to be considered or confirmed by this sham process is definitionally unfit to serve in the United States Supreme Court.

That creates a massive vise for Democrats. If they don’t launch the kind of massive character-assassination campaign to delegitimize the nominee demanded by progressives, it will produce large-scale demoralization of those voters just a couple of weeks before the election. (Or even sooner.) If they do launch such a large-scale, personal-attack campaign, it’s likely to turn off voters across the rest of the political spectrum, including women and Catholics, two demos that Democrats also need to win in less than six weeks.

Matt Lewis writes today that Democrats are about to remember why we got Trump in the first place:

Of course, Trump won’t be able to absorb all the arrows headed for Amy Coney Barrett, if she is his nominee. Barrett reminds me of the kind of nice, decent, conservative who would (in a pre-Trump world) be destroyed by the liberals and the media who want to otherize her and cast her as some extremist weirdo. And it still might happen. Some of the most vicious attacks are reserved for conservatives who show that the Republican Party isn’t all old white men. …

You don’t have to be some right-wing nut to notice the predictable onslaught—not to mention the media double standards she will face (consider the way that Barack Obama and Ruth Bader Ginsburgh’s faith was positively portrayed, while Barrett’s is framed as weird, dangerous and “cultish”—the stuff of theocrats and a real-life Handmaid’s Tale)

These attacks won’t just galvanize conservatives, they’ll remind us of the rationale that led so many to give Trump their sometimes grudging support. After watching decent conservatives like John McCain and Mitt Romney lose back-to-back, while the culture seemed to drift further leftward, many Republicans reasoned that their only recourse was to quit playing nice. To fight fire with fire. Trump was the perfect embodiment of this ethos. …

When I look at the smears already being aimed at potential Supreme Court Justice nominee Amy Coney Barrett, I’m left with one conclusion: This is how we got Donald Trump.

And that’s why the assumption that a Kavanaugh-esque spectacle won’t galvanize voters to back Trump is no small wager. Trump’s nomination of Barrett (or Lagoa, or another woman) isn’t going to change many minds about Trump among voters already inclined to oppose him either, but a failure to go all-out in smearing the nominee may well disenchant and disincentivize them to turn out at all. The upcoming confirmation hearing may not be entirely a win-win for the GOP, but it’s very clearly a lose-lose proposition for Democrats — which is why Republicans want to hold the hearing.