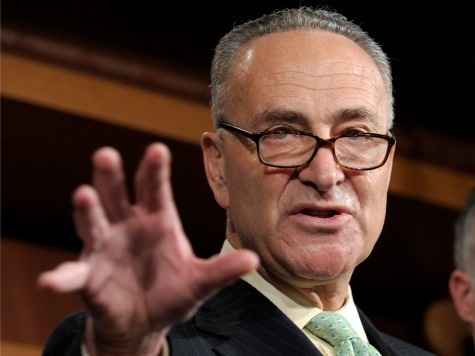 Is there anything Chuck Schumer wouldn’t try to politicize? If so, it’s not a simple, bipartisan tribute to Ruth Bader Ginsburg.

Schumer has tried to smuggle his position on filling Ginsburg’s spot on the Supreme Court into the tribute to Ginsburg proposed by Republicans. Schumer’s position might also have been Ginsburg’s. Her granddaughter claims that the late Justice expressed a “fervent wish” that the Supreme Court vacancy not be filled until a new president is installed.

Ted Cruz balked at Schumer’s gambit and blocked his amended resolution. Under the Constitution, Cruz noted, Supreme Court Justices don’t get to dictate when and how their successors will be selected. So Ginsburg’s wish, whatever it might have been, has no place in a bipartisan Senate resolution.

Schumer responded with this non sequitur:

It’s a good thing Ginsburg’s dying wish wasn’t that we replace our Constitution with Nigeria’s.

Ginsburg was many things. One of them was a relentless pro-Democrat partisan — like Schumer but smarter. Unlike Schumer, Ginsburg was more than just a relentless pro-Democrat partisan. She was a great lawyer, an original thinker, and a pioneering feminist. And she served for decades on a body that’s far more respected than the U.S. Senate is. It’s these accomplishments that deserve to be honored.

The Senate could easily honor Ginsburg without referring to her alleged dying wish. Its tribute to Justice Scalia might serve as a model. In that resolution, the Senate offered its “heartfelt sympathy” for Scalia’s family and friends and commended his tenure as a Supreme Court justice. It also acknowledged Scalia as a “talented attorney, a learned law professor, a dedicated public servant, a brilliant jurist, and one of the great justices of the Supreme Court of the United States.”

Something along the same lines should have sufficed for Ginsburg. But not with Chuck Schumer around.