‘This is not an elitist issue’: AOC on Republican inaction on climate change –video 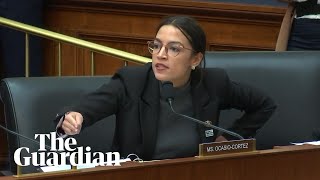 Congresswomen Alexandria Ocasio-Cortez gives a fiery speech during a committee hearing in response to Republicans push-back on her climate change policy, The Green New Deal. ‘You want to tell people that their desire for clean air and clean water is elitist?’, yells a impassioned Ocasio-Cortez. ‘Tell that to the kids in the South Bronx which are suffering from the highest rates of childhood asthma in the country … You’re telling those kids that they are trying to get on a plane to Davos? People are dying!’