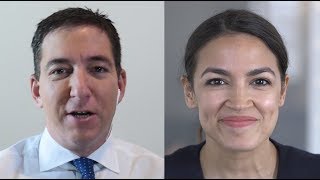 House candidate Alexandria Ocasio-Cortez talks to Glenn Greenwald about the need for Democratic Party reform, her views on immigration and criminal justice reform, her approach to “identity politics,” why she has taken such unusually blunt positions on Israel and Palestine, and the challenges of running against a machine boss politician.

Her Democratic opponent, Rep. Joseph Crowley, has been in the U.S. House of Representatives since 1999. It has been 14 years since Crowley has faced a primary challenge, thus receiving the Democratic Party nomination automatically every two years since 2004.

Crowley has become the classic New York machine boss, having obtained both his 1990s seat on the New York City Council and his seat in Congress through a combination of dynastic politics and machine favors. But for the people of the 14th Congressional District that Crowley represents — which covers parts of Queens and the Bronx and is 70 percent nonwhite — it means they have had no Democratic Party alternative in this Democratic safe district for more than a decade.

All of that changed this year as a result of Alexandria Ocasio-Cortez, whose primary challenge against Crowley has sparked substantial excitement within her district and, then, media attention throughout the country.

Can a 28-year-old Democratic Socialist pull of one of the rarest feats in U.S. politics: beating an entrenched incumbent in a Democratic Party primary?