Another early lid today for the Biden campaign 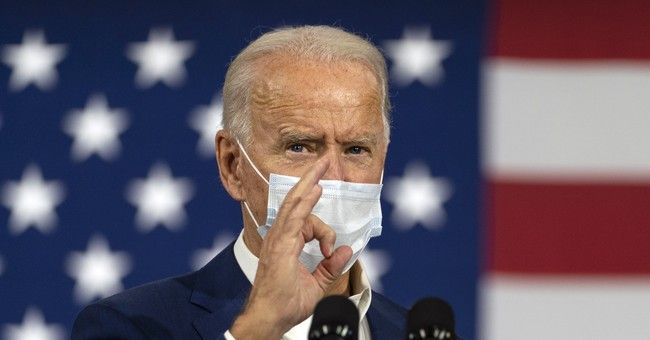 Five days from now, Team Joe’s habit of keeping him off the campaign trail will matter either not at all or a lot. If he’s lively and on the attack at Tuesday night’s debate, no one will care the next morning that he’s been keeping a low profile for much of September. They’ll have seen with their own eyes that he’s more nimble than he’s been cracked up to be. The “early lid” stories will remain fun for righty media but they won’t have any reach.

If, however, he’s sluggish on Tuesday night, his low profile will seem even more suspicious than it does already. Maybe Trump’s right, people will think. Maybe Democrats really are trying to hide their guy for fear of what conclusions the public might draw about his capacity if they got to watch him at length. What if Biden’s simply unfit for presidential work at this point? “There is scant physical evidence that the former vice president and Democratic nominee is in town,” the Times noted recently about those rare cases when Biden actually is out on the trail. “His visits are scarcely publicized beforehand, logistical details are closely held and his event venues serve as much as video studios as places of gathering. Barely anyone is allowed near the candidate.” Social-distancing is virtuous, but surely his events could be hyped locally to make sure the public’s aware that he’s there even if physical attendance is limited. Why aren’t they?

Do Democrats just … not want people to know when he’s around?

He’s not completely off the grid today, it should be noted. He has two virtual events. But live retail events in front of voters? Zippo.

Joe Biden called a lid on the day earlier this morning. No events, no questions. Less than 6 weeks before the election, the Democratic nominee is working at a 50% clip, calling a lid 7 of the past 14 days and 11 of the past 26 this month. Is this a preview of a Biden presidency?

Tracking Biden Campaign Lid Calls for the month of September. (Date, time & what the pool reporters of the day wrote)

The excuse all week has been that he’s probably busy with debate prep. I think that’s plausible today, the final weekend before the first debate, but it’s hard to believe that his preparation until now has been so intensive that it’s required entire days to be cleared from his schedule.

For what it’s worth, the AP claims he’s preparing “aggressively.” I believe it. Every day of this campaign has been a referendum on Trump and it’s possible that every day to come until November 3 will be a referendum on Trump as well, with one exception — Tuesday night. That’s when the election momentarily becomes a referendum on Biden and his fitness for office. If he aces the test, voters will probably go back to their baseline electoral question, “Do I want four more years of this?” If he fails it, suddenly we have a “choice” election in which Biden’s capacity is a major issue. I doubt that Trump can win a referendum. But he can win if it’s a choice.

Biden’s campaign has been holding mock debate sessions featuring Bob Bauer, a senior Biden adviser and former White House general counsel, playing the role of Trump, according to a person with direct knowledge of the preparations granted anonymity to discuss internal strategy. Bauer has not actually donned a Trump costume in line with Trump stand-ins from previous years, but he is representing his style and expected strategy…

“Arguing over facts, litigating whether what he’s saying is accurate, that is not winning to Biden,” said Jen Psaki, a former Obama aide who is close to Biden’s team. “This is an opportunity to speak directly to the American people. His objective should be to speak directly to them, but not be pulled in by Trump. That is hard.”

Some Democrats are worried that Trump will succeed in baiting Biden, possibly by attacking his son Hunter, and that Biden will end up losing his temper. I’m not so sure that’d be a bad thing. If the biggest knock on Sleepy Joe is that he’s too sleepy for the job, any sign of liveliness probably helps him.

Trump has told associates he wants to talk specifically about his opponent’s son Hunter Biden and mused that the debates are when “people will finally realize Biden is just not there,” according to one adviser. The president is so eager to lay into his rival that he has called aides to test out various attacks, focusing on broadsides that cast Biden as a longtime Washington insider with a limited record of accomplishment, said another adviser, who like many interviewed for this story spoke on the condition of anonymity to candidly describe private talks…

The prospect of a cage match between a president for whom no subject is off-limits and a challenger who can be openly emotional is making some Biden advisers nervous. They see a fine line between Biden’s passion and empathy, which can appeal to voters, and the raw anger that sometimes gets him in trouble and could undercut his pitch as a calming alternative to a president who thrives on chaos.

“When you go at his family, he becomes hotter than hell, which is part of the thing I worry about,” said John Morgan, a Florida trial lawyer and major Biden donor. “I think what Biden has to be careful about is not letting his Irish temper blow when that happens.”

One Democratic aide told WaPo that it’s hard to prepare to debate someone like Trump who has a knack for getting under people’s skin: “It’s like training for a knife fight and somebody is getting an Uzi.”

Trump’s aides are reportedly nervous too, though. They spent months lowering the bar for Biden by accusing him of being a drooling geriatric imbecile. Lately they’ve tried to undo that with a barrage of messaging about how he’s an expert debater after so many decades in the Senate, but the “Sleepy Joe” thing is too entrenched by now. Part of me even wonders if the early lids lately are part of a strategy by Biden’s campaign to deepen suspicion ahead of the debate that he’s too frail to do the job. The lower public expectations are, the easier it is for him to “win” on Tuesday by simply being basically coherent for 90 minutes. And of course there’s a chance that he performs well, which may have an outsized effect on the race. If some voters are on the fence because they’re worried Biden might not be fit for office, a solid debate might pull them into his column. Trump’s behind in the race and so he’s the one who needs a gamechanger to happen on Tuesday. What if he doesn’t get one? What’s Plan B to close the gap after “cross your fingers and hope Biden forgets his name” doesn’t work?

Here’s Pelosi yesterday doubling down on her dopey suggestion that Biden should skip the debates lest he dignify Trump by his mere attendance. Exit question: If Trump *does* get a gamechanger on Tuesday, whether because he performs strongly (doubtful) or because Biden performs weakly (quite possible), will he skip the second and third debates? Why give Sleepy Joe the chance to undo any damage he does to himself at the first debate?

.@SpeakerPelosi on why she thinks Biden shouldn’t debate Trump: “The president has no fidelity to fact or truth, and actually in his comments the last few days, no fidelity to the Constitution … He and his henchmen are a danger with their comments, are a danger to our democracy” pic.twitter.com/xWso2rYcpR