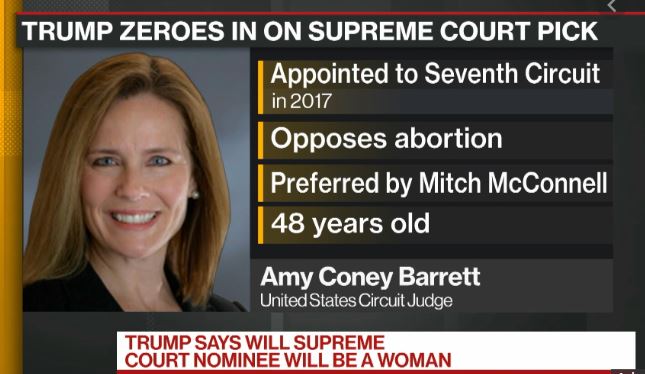 President Trump on Saturday announced he has chosen Amy Coney Barrett as his pick to fill the Supreme Court seat vacated by the late Justice Ruth Bader Ginsburg — a move that could significantly shift the nation’s highest court to the right if she’s confirmed by the Senate.

“Today it is my honor to nominate one of our nation’s most brilliant and gifted legal minds to the Supreme Court,” Trump said in the Rose Garden alongside Barrett. “She is a woman of unparalleled achievement, towering intellect, sterling credentials and unyielding loyalty to the Constitution — Judge Amy Coney Barrett.”

Barrett, a judge on the 7th Circuit Court of Appeals, had been considered by Trump for the vacancy left by the retiring Justice Anthony Kennedy in 2018. Trump eventually chose now-Justice Brett Kavanaugh instead, but a source told Fox News that she had been at the front of his mind to fill a vacancy by Ginsburg.

Speaking at the White House, Barrett said she understood that “this is a momentous decision for a president and if the Senate does me the honor of confirming me, I pledge to discharge the responsibilities of this job to the very best of my ability.”

Democrats were typically foaming at the mouth (a perpetual malady for them) before knowing whom the nominee was. To a rank-and-file Democrat, you cannot be a decent person if you disagree with the Left, so any person nominated by a Republican must be evil incarnate.

Contrary to the leftist wailing and gnashing of teeth, textualism is the dominant theory of statutory interpretation thanks to Antonin Scalia. It is the most objective method of interpreting texts and serves as a safeguard against judicial lawmaking. Barrett shares that view, and her impeccable record renders her more than qualified to succeed Justice Ruth Bader Ginsburg on the Supreme Court.