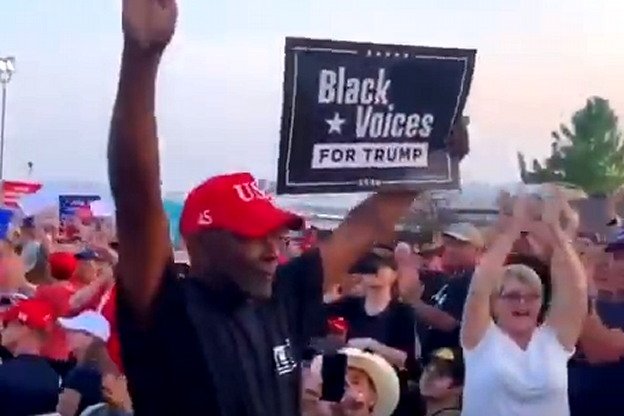 Trump’s appeal among black and Hispanic voters is strong and growing.

It’s one aspect of the 2020 election that confounds Democrats and people in the liberal media who have spent three years insisting that President Trump is a racist.

In fact, Trump speaks to and supports all Americans. It’s so simple but the Democrats just don’t get it.

In the end, minority voters may help Trump win reelection.

American Greatness reports on the surge in the polls:

Trump Surging With Hispanic and Black Voters In Critical States

Joe Biden has a problem. Actually, he has a few problems. Recent polling shows that Donald Trump is running much stronger with Hispanics and black voters than he did in 2016. Those are demographic groups that Biden needs to win big if he has any hope of winning the election. If Trump’s strength with these voters continues, it will doom Biden and lead to a second Trump term.

In Florida, an NBC/Marist poll conducted earlier this month showed President Trump with 50 percent of the Hispanic vote to Biden’s 46 percent. In 2016, Clinton won 62 percent of Hispanics compared to 35 percent for Trump. Trump is also outperforming 2016 with black Floridians. The same poll shows him with 11 percent support compared to 8 percent in the last election. If those numbers hold, Florida is simply unwinnable for Biden.

Polling in other states tells a similar story. A poll of 750 likely voters conducted for the Center for American Greatness in Nevada by Rasmussen Reports shows Biden leading Trump by just a single point (49 percent to 48 percent). As in Florida, Trump is running strong with Hispanics, getting 47 percent support to Biden’s 49 percent.

For comparison, Trump got 29 percent of the Hispanic vote in 2016 to Hillary Clinton’s 60 percent. The poll also shows Trump with 41 percent of the black vote. Interestingly, he also ran stronger among bin Nevada in 2016 than he did nationally, so this is a continuation of that trend.

Democrats should be very concerned about this.

@realDonaldTrump More blacks for TRUMP then ever before bc the RADICAL AND GODLESS Democratic Party are INSANE, DANGEROUS TERRORISTS ALONG WITH THE EXTREMISTS BLM AND ANTIFA! #BLACKWOMENFORTRUMP pic.twitter.com/vFZPhPm22C

Latinas GET IT DONE!

Trump is a president for all people.