Trump: ‘No One Is Better’ Than Amy Coney Barrett To Preserve ‘Our Priceless Heritage As A Nation Of Laws’ 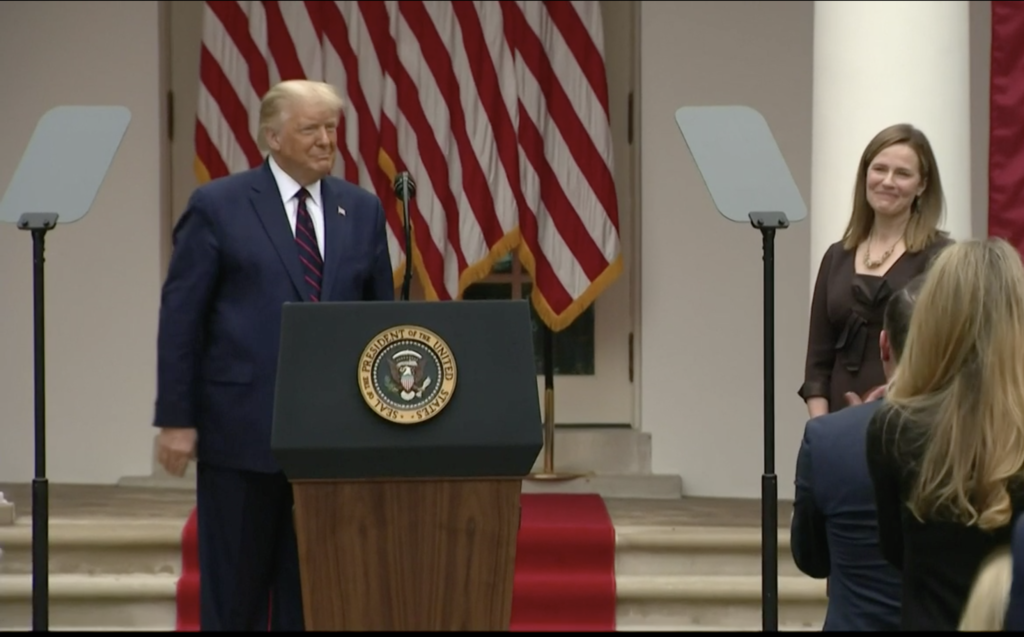 “I stand before you today to fulfill one of my highest and most important duties under the United States Constitution, the nomination of a Supreme Court justice,” Trump stated.

Trump praised Barrett’s track record as a federal judge as well as her history working with deceased Supreme Court Justice Antonin Scalia. He also urged Democrat lawmakers and the media to provide a “respectful and dignified hearing that she deserves and, frankly, that our country deserves.”

“I urge lawmakers and members of the media to refrain from personal or partisan attacks, and the stakes for our country are incredibly high. Rulings that the Supreme Court will issue in the coming years will decide the survival of our Second Amendment, our religious liberty, our public safety, and so much more,” Trump said. “To maintain security and liberty and prosperity, we must preserve our priceless heritage of a nation of laws, and there is no one better to do that.”

Even before Trump’s formal nomination of Barrett, Democrats and the media targeted her faith and pro-life record. Barrett’s nomination, Trump noted, is historical for not just his presidency but also for the United States. Not only is Barrett Trump’s third nomination to the Supreme Court, but she will be the first mother of school-aged children to serve on the court if she is confirmed.

“Thank you for sharing your incredible mom with our country,” Trump told Barrett’s children, who were seated on the front row. Barrett and her husband have seven children, all younger than age 20. Two are adopted from Haiti.

Trump also assured the American public that Barrett will be devoted to her duties as a judge in the highest court of the land and will take seriously her responsibility to apply the Constitution faithfully.

“Amy Coney Barrett will decide cases based on the text of the Constitution as written,” Trump said. “As Amy has said, being a judge takes courage. You are not there to decide cases as you may prefer you are there to do your duty, and to follow the law, wherever it may take you. That is exactly what Judge Barrett will do on the U.S. Supreme Court.”

Barrett accepted the nomination and promised to protect the Constitution and “be mindful” of Ginsburg and Scalia’s legacies.