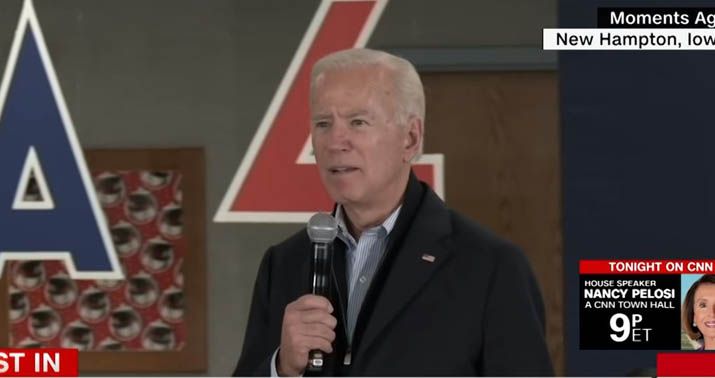 The first debate takes place tomorrow night and Joe Biden has been devoting his days to preparing for it. All of those days this month when his campaign has announced an “early lid” have allegedly been days when Biden is practicing for the debate and reading through his briefing books to make sure he’s got all the details in mind. But reading through a few pieces about his preparation it’s clear that Democrats are mostly concerned about something that could trip Biden up tomorrow night: His temper.

Biden has a well known tendency to flip out at people when challenged. Remember this moment from last December?

Remember this from March:

Clearly, those reading the tea leaves on the left are concerned that angry Biden could made an appearance tomorrow night. Here’s E.J. Dionne:

The former vice president also has to keep a lid on his tetchiness. Biden sometimes gets impatient and defensive when he is challenged about past positions or actions. He shouldn’t take the bait. His job is not to win a lawyer’s debate about the past, but to make the audience feel good about who he is, and who he will be as president.

Occasionally, it’s good to push back against a moderator’s question if it’s genuinely unfair. Voters like strength in their presidents and can thus appreciate politicians who stand up for themselves. But Biden shouldn’t litigate questions that are unpleasant but reasonable. Let Trump look like the jerk.

The NY Times also published a piece on Biden’s debate prep today which also mentions Biden’s temper as one of the biggest risks he faces tomorrow night:

The risks for Mr. Biden are manifold. Allies and people who have coached him for past debates fret about his temper and tendency toward defensiveness when it comes to his own lengthy record. His debate showings during the 2020 primary — ultimately sufficient to win — were often marked by meandering digressions and antiquated references and were rarely, if ever, hailed as command performances…

Mr. Biden’s advisers do not hope to muzzle his indignation entirely, campaign officials said — but want to ensure that any temper-flashing moments are channeled in a productive direction: anger about the loss of life during the pandemic, Mr. Trump’s sometimes indifference to public health guidelines and perhaps especially the president’s comments, as reported by The Atlantic, that American soldiers who died in war were “suckers” and “losers.”

Last week the Washington Post published a similar piece saying Biden advisers were nervous he could lose it during the debate:

The prospect of a cage match between a president for whom no subject is off-limits and a challenger who can be openly emotional is making some Biden advisers nervous. They see a fine line between Biden’s passion and empathy, which can appeal to voters, and the raw anger that sometimes gets him in trouble and could undercut his pitch as a calming alternative to a president who thrives on chaos.

“When you go at his family, he becomes hotter than hell, which is part of the thing I worry about,” said John Morgan, a Florida trial lawyer and major Biden donor. “I think what Biden has to be careful about is not letting his Irish temper blow when that happens.”

Biden’s emotion, especially when it comes to his family, has often been a strong suit. But he has also shown a tendency to lose his composure when his record, and especially his decency, are questioned — such as when he declared in an interview with “The Breakfast Club” that African Americans considering voting for Trump “ain’t black,” or when he snapped, “Why, why, why, why, why?” at a reporter who asked during the primary why he had attacked a rival.

Speaking of Biden’s debate prep, one unnamed Democratic congressional aide told the Post, “It’s like training for a knife fight and somebody is getting an Uzi.”

Once Biden gets angry a lot of that careful debate prep goes out the window. So we’ll have to see if he’s able to shrug if off and keep control or if he loses it and starts shouting at Trump the way he has at voters in the past. And make no mistake, Biden has been doing this for a lot of years at this point. This clip is from 1988 in which he flipped out when challenged and then concluded that knowing more than the other guy matters in a debate but that the country was ultimately looking for was a leader not a gutless technocrat: