If your protest blocks and attacks a car, you’re going to get run down 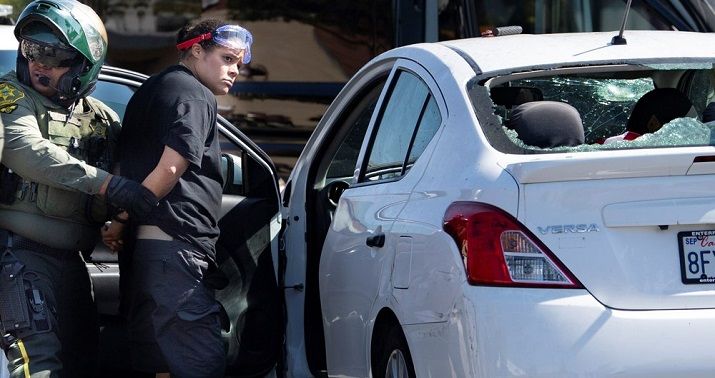 This is a story that’s sadly been growing all too common of late. Protesters show up for a large rally in one of our major cities and they begin blocking traffic illegally. Some car gets trapped in the mayhem and people begin attacking the vehicle. The person fears for their life and hits the gas, running down someone in the process. And then people are taken to the hospital (if they’re lucky) and the finger-pointing begins.

The same story played out in a southern California suburb of Los Angeles this weekend, but there’s a twist to it. In several previous cases we’ve looked at here, the protesters were from the Black Lives Matter movement and the car being attacked was either a Trump or Blue Lives Matter supporter or just some random motorist getting caught up in the madness. But this time it was the opposite situation. The motorist was an organizer of the BLM protest and the attackers were from a group hoisting American flags and Trump 2020 banners. (Associated Press)

An organizer of a Southern California demonstration against racism was in jail Sunday on suspicion of attempted murder after authorities say she drove through a crowd and struck two counterprotesters.

Tatiana Turner, 40, was arrested Saturday in Yorba Linda after speeding from a parking lot when her car was surrounded by shouting counterprotesters.

Demonstrators on both sides who had clashed on a sidewalk earlier had been ordered by police to leave the area at the time and an angry mob had surrounded Turner’s car and wouldn’t let her drive away, said Anthony Bryson, who helped plan the event for the Urban Organizers Coalition.

“People had broken her windshield,” Bryson told The Associated Press. “She was trying to leave. She was in fear for her life.”

The driver, Tatiana Turner, was arrested and held on one million dollars bail while facing investigation for possible attempted murder and vehicular assault charges. But if we’re all willing to take off our partisan hats for a moment here and look at this rationally, we shouldn’t be cheering for these developments.

From all accounts, the police had already declared an unlawful gathering and ordered all of the protesters from both sides to disperse and leave the area after the confrontation between the two groups grew violent. Ms. Turner was attempting to follow those instructions, getting in her vehicle to leave. But the counterprotesters blocked the path of her car and began physically attacking it. They had already smashed her windshield and were going after the driver’s side door when she hit the gas. The rear window of her car was smashed out at that point as shown in the AP photo of her arrest.

If we’re going to applaud when some BLM supporter or organizer plows into a Blue Lives Matter protest and is arrested, we need to abide by the rule of what’s good for the goose being good for the gander. If you stand in front of a running automobile while your friends are physically attacking it, you’re probably going to get run over. By that point, the fight-or-flight instincts of the driver have taken over.

This isn’t a case of my playing the whataboutism card or implying that the Blue Lives Matter rallies are anywhere near as violent and unlawful as the majority of BLM and Antifa gathers that regularly devolve into riots and looting. That’s far from the case. But as more and more instances of “protests and counterprotests” coming into direct conflict pop up, we’re unfortunately very likely to see more of these vehicular assault incidents taking place. And the rules of engagement need to apply to both sides equally. Don’t attack motorists and cut off their path to leave the area of their own accord. Somebody is going to get run down and it’s not going to end well for anyone.