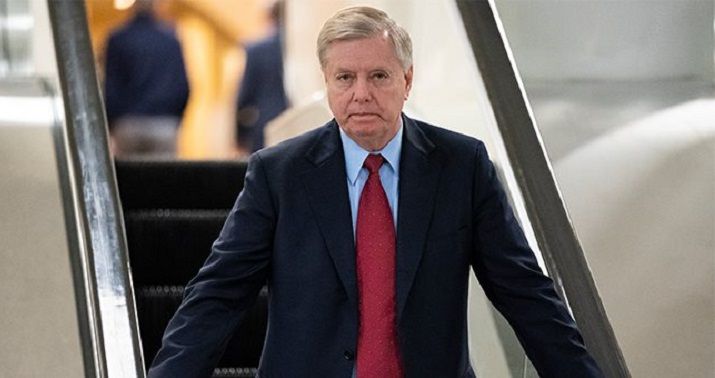 Senator Lindsey Graham is chairman of the Senate Judiciary Committee so he is setting the timeline for Amy Coney Barrett’s confirmation. He confirmed the starting date of October 12 during an interview on FNC Saturday. By Sunday morning, he elaborated on how the process will proceed.

On FBN’s Sunday Morning Futures, said more than half of Supreme Court nominees have had hearings done within 16 days or less so that works out to Oct. 12. He’ll be able to hand ACB’s nomination off to Mitch McConnell by October 22 if it goes as planned.

“We’ll have a day of introduction. We’ll have two days of questioning, Tuesday and Wednesday, and on [Oct. 15] we’ll begin the markup.”

“We’ll hold it over for a week, and we’ll report her nomination out of the committee on Oct. 22,” he continued. “Then it will be up to Sen. [Mitch] McConnell as to what to do with the nomination once it comes out of committee.”

This sounds reasonable but we know the political atmosphere in 2020 is nowhere near reasonable. Senator Dick Durbin was asked Sunday if Democrats can slow down the process by denying unanimous consent to meet and holding a series of quorum calls. That was the suggestion from Adam Jentleson, deputy chief of staff for former Sen. Harry Reid. ABC’s George Stephanopoulos, former Clinton staffer, asked if that was enough to throw a wrench in the Republicans’ plan. Nah, said Durbin. Durbin, believe it or not, said the nominee should be treated respectfully, as the process should be, too. Democrats have no “procedural silver bullet”.

“I know Adam. I like Adam and respect him, but he’s wrong,” the Illinois senator responded.

“We could slow it down perhaps a matter of hours, maybe days at the most, but we can’t stop the outcome,” he added. “What we should do is to address this now respectfully.”

Durbin said his caucus has “no procedural silver bullet” to delay the confirmation battle beyond the election.

“That’s true,” the Senate Democratic Whip told Stephanopoulos, adding that if two GOP senators beyond Sens. Lisa Murkowski (R-Alaska) and Susan Collins (R-Maine) decide against confirming Barrett ahead of the election, “then we could have a different timing, perhaps a different outcome.”

NEW: Democratic Sen. Dick Durbin tells @GStephanopoulos that Senate Democrats can “slow” the process of confirming Supreme Court nominee Amy Coney Barrett “perhaps a matter of hours, maybe days at the most, but we can’t stop the outcome.” https://t.co/zTNMzk2uyg pic.twitter.com/mA8TYkY9Df

It should be no surprise that that advice came from a former Harry Reid staffer. Reid was notoriously vicious in political battles – remember, he said on the floor of the Senate that Mitt Romney didn’t pay taxes then laughed about his lie afterward saying, “It worked.” He didn’t care about truthfulness during the 2012 presidential election as long as his lies got to voters and they believed his outlandish claims. Reid is responsible for doing away with the filibuster in the Senate, mostly to ram through the House’s Obamacare legislation. But it’s President Trump who is killing civility and tradition in politics, right?

Durbin even said he will meet with Amy Coney Barrett before the confirmation hearing. It’s a matter of respect, he said. This is the kind of magnanimous behavior we are not accustomed to seeing from Durbin.

When asked whether he would meet with Barrett, Durbin said he will “extend that courtesy, if she requests it, for at least a socially distanced, safe meeting, perhaps over the phone.”

“I want to be respectful,” he said. “We disagree on some things. And in terms of participating in the Senate Judiciary Committee hearing, I’ll be there to do my job.”

Jen Rubin, columnist for the Washington Post who was once the newspaper’s token conservative, wasn’t happy with Durbin’s answer.

Meanwhile, Joe Biden was able to get out of bed and get dressed to show up and make a statement on Trump’s Supreme Court nomination. In a rare press conference appearance, he proceeded to ramble on about the Supreme Court and RBG and how evil Trump is for moving forward, doing his constitutional duty. He went too far, as he always does, and came forth with a list of horrible things that will happen to Americans should ACB become the ninth justice.

He mentioned that if he wins the election, the nominee’s name should be withdrawn and he should be able to pick his own nominee. If Republicans have their way, ACB will be confirmed before Election Day and Joe will just have to live with the president doing his constitutional duty. Look at the crazy assertions Biden makes. He’s the one who is supposed to be able to unite the country. If he couldn’t do it in 47 years, why believe he can do it now? We don’t need to go back to the status quo past. The Obama-Biden administration got us President Trump, after all.

As a final note, Biden only took three questions from the press after his speech about ACB. Three questions. He’s been absent from the public’s view for most of the month and only allows a few reporters into venues when he does come out of the basement for air. The press is so in the tank for him, though, they just go along with his handlers keeping them at a distance.