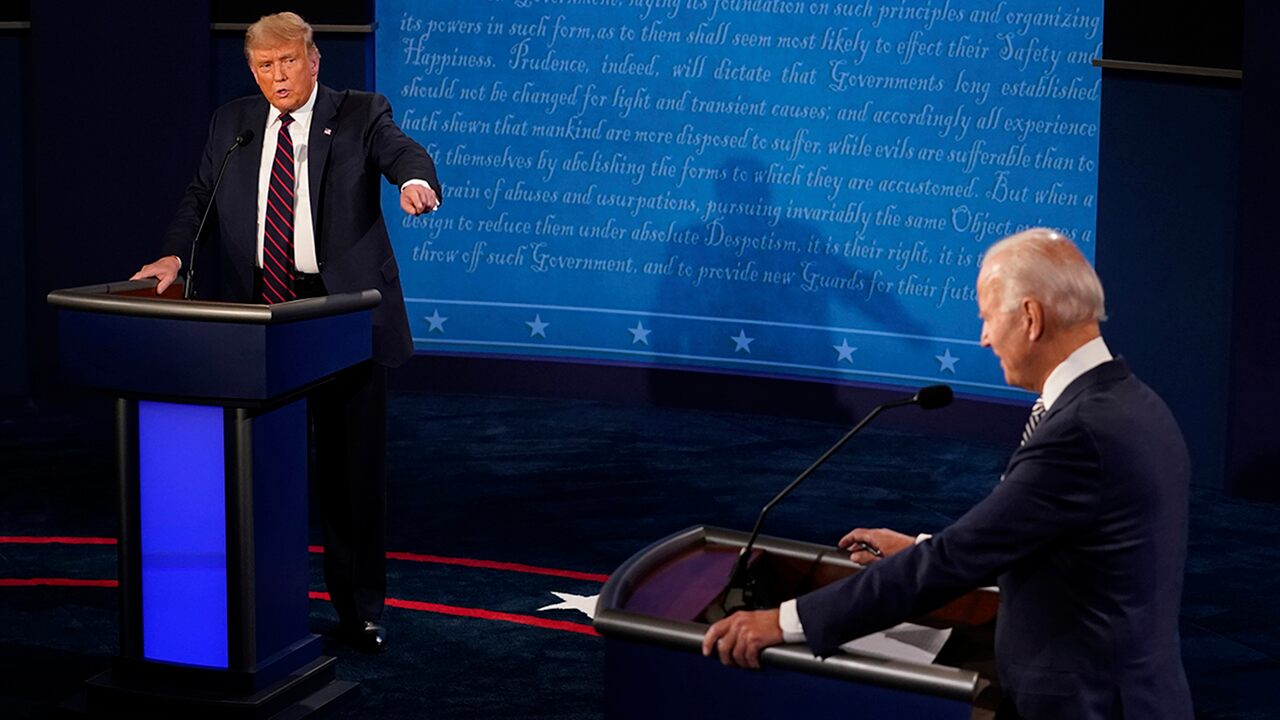 President Trump and former Vice President Joe Biden kicked off their first presidential debate sparring over the Supreme Court nomination and ObamaCare, but it quickly devolved into insults with Biden calling the president a “clown” and a “liar.”

Trump stood by his Supreme Court pick of Judge Amy Coney Barrett and his push to get her confirmed before the election.

“We won the election. Elections have consequences,” Trump said, justifying while he appointed a nominee in an election year.

Biden, who declined to say whether he supports packing the court or ending the filibuster, said the American people should decide who fills the seat vacated by the late Justice Ruth Bader Ginsburg.

“We should wait and see what the outcome of this election is because that’s the only way the American people get to express their view,” Biden said.

The debate quickly devolved into Trump tussling with Fox News moderator Chris Wallace and then with Biden over healthcare and protecting the Affordable Care Act.

Trump accused Biden of trying to get rid of private health insurance. “Not true” Biden retorted.

“I am the Democratic Party right now,” Biden said, who hit Trump for his handling of the coronavirus and for wanting to repeal ObamaCare’s protections for preexisting conditions.

Trump lobbed attacks on Biden, including on his smarts and crowd sizes. Biden tried to shut him down by calling him a liar, “clown” and telling him to shut up.

“Folks, do you have any idea what this clown is doing?” Biden said at one point.

It’s the first presidential debate of the unprecedented 2020 election cycle, marred by a global pandemic and expanded early and mail-in voting opportunities to prevent the spread of the deadly coronavirus.

Voting is already underway in many states, including the battlegrounds of Pennsylvania, Michigan and Minnesota. Nationwide nearly 1.3 million people have already cast their ballots either by mail or through early in-person voting, according to the U.S. Elections Project.

The Trump campaign, which has tried to keep a robust travel schedule despite the pandemic, had pushed unsuccessfully for a much earlier fourth debate to account for the new voting schedules.

Trump and his allies have for months depicted Biden as hiding from the media in his basement and have relished in an opportunity to face-off with Biden who would be unaided by a teleprompter.

The Biden campaign has benefited from a record-shattering $364.5 million in fundraising in August and a consistent lead in the public polls nationally and in many swing states. Biden has sought to keep the focus on Trump’s handling of the coronavirus pandemic, which has cost more 200,000 lives in the United States.

The next Biden-Trump debate is slated for Oct. 15 and the final one is Oct. 22. Vice President Mike Pence and Sen. Kamala Harris, D-Calif., will face off next in the vice presidential debate on Oct. 7.