Biden calls first debate ’embarrassing for the country,’ wonders how many people took ‘kids away from the television’ 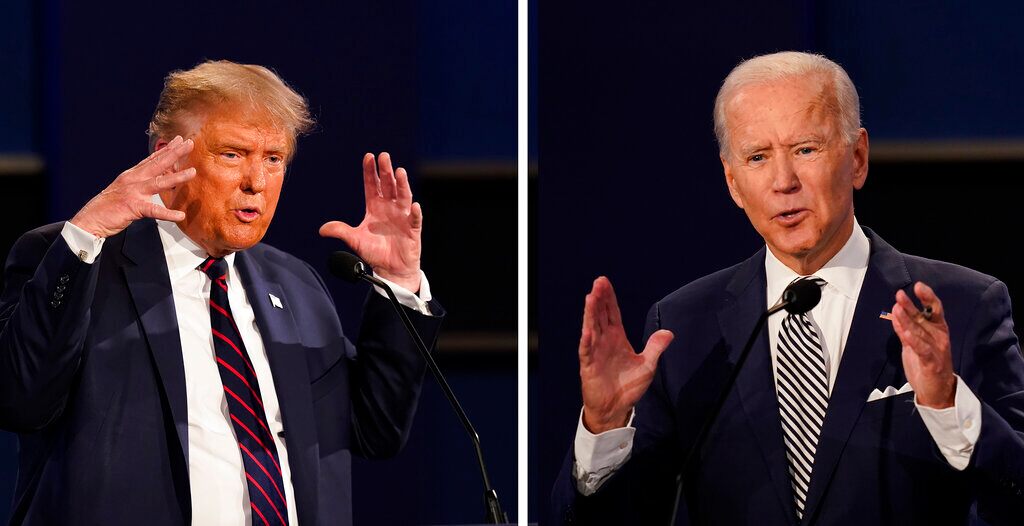 Democratic presidential nominee Joe Biden on Wednesday called the first presidential debate “embarrassing for the country” and speculated that some parents took their children away from the television as President Trump regularly interrupted the former vice president and moderator Chris Wallace and hammered Biden with personal attacks, including about his son Hunter’s drug use.

The widely panned affair left the Trump campaign calling its candidate “the dominant force” and led the Commission on Presidential Debates to say it is likely to implement format changes “to ensure a more orderly discussion.” Biden made his comments on the debate as he took a train tour through Ohio and Pennsylvania on Wednesday, speaking with local television stations, including Cleveland’s WKYC.

“I thought that was embarrassing for the country the way the president acted for the rest of the world watching this,” Biden told WKYC.

Biden added: “I just thought that – it was hard for me to believe that a president of the United States would be so viciously classless and do what he did … And all I kept thinking was I just, I just, I wonder how many people had to take their kids away from the television set when this was going on, just to say, this is not who we are.”

Trump throughout the debate talked over Fox News’ Wallace and Biden, regularly lobbing personal attacks against the latter. At one point, as Wallace was attempting to move on to another topic, Wallace reminded the candidates: “I am the moderator of this debate.”

Biden, for his part, showed his frustration with Trump at times, telling him to “shut up, man” and say “everybody knows he’s a liar.” Trump, meanwhile, hammered the point that Biden is allegedly controlled by the far-left wing of the Democratic party, saying that Biden would pack the Supreme Court, which Biden did not confirm or deny, and falsely saying that Biden has committed to implementing Medicare-for-all. Biden forcefully denied that point, noting that he was attacked during the Democratic primary for not vowing to eliminate private health insurance.

Trump, in response to that comment, told Biden that he’d “lost the left.”

Also in his interview with WKYC, Biden said he was excited for the format of the second debate, which according to the Commission on Presidential Debates website “will take the form of a town meeting.”

“But the next debate is going to be a town hall-type debate and I’m really looking forward to it because, as I understand it, audience members are going to ask us a question, we get to answer the question each of us,” Biden said to WKYC. “And I just hope there’s an opportunity to actually answer the question.”

It is unclear what format changes the commission might make ahead of the next debate. Many have suggested a mute button for the moderator, but that would still likely allow an interrupting candidate to be picked up on the other’s mic and the interruptions would still disrupt proceedings. Wallace also needed to remind Biden multiple times throughout the debate to not interrupt Trump when it was the president’s turn to answer a question.