A new migrant caravan is marching north as arrests at the U.S. border rise for fourth straight month 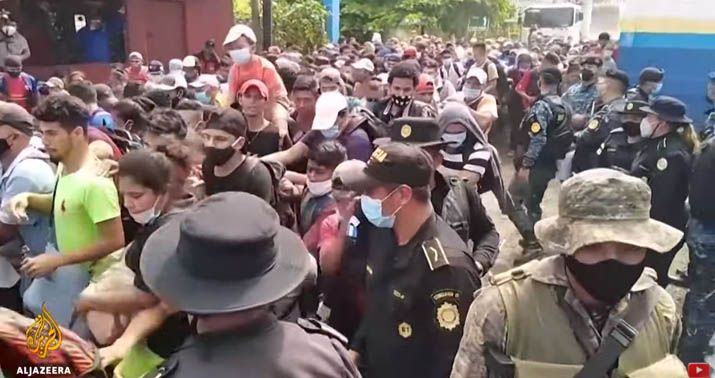 It seemed for a while that we might be done with migrant caravans from Central America. With the coronavirus spreading around the world, borders were closed and so were shelters that house migrants along the route from Central America to the U.S. But CBS reported yesterday that a new caravan composed of nearly 1,000 migrants has formed in Honduras and is marching north:

Hundreds of migrants began walking Wednesday night from this city in northern Honduras toward the Guatemala border, testing a well-trod migration route now in times of the novel coronavirus. Calls for a new migrant caravan to leave from the San Pedro Sula bus station October 1 had been circulating on social media for weeks.

Governments throughout the region made it known they were watching Wednesday. Mexico’s immigration agency said in a statement that it would enforce “safe, orderly and legal” migration and not do anything to promote the formation of a migrant caravan. The U.S. Embassy in Honduras said via Twitter Wednesday that migration to the U.S. was more difficult than ever right now and more dangerous because of COVID-19.

The reasons for the caravans hasn’t changed. These are economic migrants looking for work or a better life. The conditions in Central America have only gotten worse because of COVID. CNN’s report makes it very clear these are people fleeing a devastated economy:

Hundreds of Hondurans formed a caravan headed towards the United States on Wednesday, seeking to improve their living conditions as the coronavirus has killed over 2,000 people and paralyzed the economy in the Central American nation, local media reported…

“I’m leaving with my husband and my two children. There is no work here. There is nothing to do, and if you find a job they only pay you 100 lempiras ($4) a day,” said a woman who identified herself as Cristina to local television program Hoy Mismo.

Wednesday’s group marks the first caravan to depart Honduras in 2020, as the nation suffers the largest recorded economic decline in its history after six months of strict lockdown measures aimed at slowing the spread of the novel coronavirus.

So it’s clear what is driving this. But I suspect most of these people will claim asylum if they make it to the U.S. border even though that system was never meant to apply to economic migrants. In the past, claiming asylum was a quick way to get released into the U.S. but that changed with Trump’s remain in Mexico policy.

Speaking of Mexico, the formation of caravans really seemed to stop after Mexico refused to allow them to march across its southern border unimpeded. I suppose we’ll have to wait and see if that’s still the case of if President AMLO is too preoccupied with other problems to deal with this. So far Mexico is saying the caravan won’t be allowed to cross the border but saying that and actually stopping it at the border are two very different things.

While this is the first new caravan since the pandemic, border apprehensions have been climbing for each of the past four months. Last month the total was just shy of 50,000 which is up from a low of just 17,000 in April.

The arrests recorded by CBP — the main metric used to gauge border crossings — shows that unauthorized migration to the U.S. continued to increase in the summer, despite the ongoing pandemic and the Trump administration’s policy of swiftly expelling most migrants, including asylum-seekers and unaccompanied children, without allowing them to seek humanitarian refuge.

Apprehensions along the U.S.-Mexico border have been increasing since April, when they plummeted to 17,000. But they continue to be substantially less than the number of arrests CBP made during the same time period last year, when hundreds of thousands of families with minors and unaccompanied children journeyed north from Central America.

Here’s an Al Jazeera report which shows the new caravan literally pushing their way through the Guatemalan border. It’s very clear from this report that what is driving this is jobs. One person interviewed said, “We are dying of starvation. There are no jobs.” And yet, I’d be willing to bet most of these people know that claiming asylum is their best chance to be let into the U.S., assuming they make it that far.