The downfall of Fox News’s Chris Wallace and John Roberts 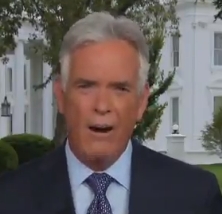 Some men are alphas, like President Trump, and some men are betas, like Al Gore and the sneering, puffing Biden.  And then there are men who aren’t even strong enough to be betas.  They are, instead, weak, mewling creatures who lack either presence or power, and who then cry about it afterward.  Chris Wallace and John Roberts, both employees at Fox News, have exhibited behavior that’s so craven and humiliated themselves so badly in the eyes of Fox News’s core audience that they should be retired immediately.

It all started with Chris Wallace’s stint as a debate moderator for the first presidential debate.  Right out of the gate, he failed to stop Biden from interrupting Donald Trump:

Trump immediately realized that Wallace was either weak or biased and proceeded to ignore him.  In both estimations, Trump was correct.  For the next 90 minutes, Wallace proved himself to be both ineffectual, for he bleated like a lost lamb when he couldn’t regain control of events, and partisan.  That partisanship was almost criminal when Wallace failed to force Biden to respond substantively to the question about whether Biden intends to pack the Supreme Court.  Trump, a true alpha predator, rode roughshod over the inconsequential Wallace.

After the debate, Wallace didn’t have the decency to say, “I should have done better.”  Instead, typically for a leftist, he blamed someone else.  In his case, he blamed Trump:

Right out of the gate, Hemmer asked Wallace about those criticisms. Wallace’s answer was to blame Trump for how the evening went, stating that “at first I thought the President was going to engage in a debate with Biden and let Biden answer so they could go back and forth, [but] that was a misapprehension.”

Wallace also rewrote history, saying both that Biden did answer the question about court-packing (he did not) and that it was Trump who started interrupting (he did not).

Another shameful moment on Wallace’s part was his asking Trump to disavow any support for white supremacists.  In fact, Trump has repeatedly done so, including in an interview with Wallace four years ago:

See it for yourself. It was a setup by Racist Hoaxer Chris Wallace! pic.twitter.com/BbxsJs2BTI

Here is a compilation of @realDonaldTrump condemning white supremacy at least 17 times. pic.twitter.com/nttX9vvVtw

Trump immediately answered “sure” to the question about disavowing white supremacy, but he also pointed out that Biden ought to be asked to disavow Antifa.  Wallace refused to ask Biden that question, relieving Biden of the burden of offending his hard-left base.  Fox News’s John Roberts apparently didn’t watch the debate, or didn’t understand it, or hasn’t paid attention to the last few years of Trump’s repeated statements disavowing white supremacy.  That’s why, during Wednesday’s press conference with Kayleigh McEnany, Roberts stupidly asked her whether Trump condemns white supremacy:

Kayleigh, if I could start off, I’d like to ask you for a definitive and declarative statement, without ambiguity or deflection. As the person who speaks for the president, does the president denounce white supremacism, and groups that espouse it in all their forms?

Kayleigh, if I could start off, I’d like to ask you for a definitive and declarative statement, without ambiguity or deflection. As the person who speaks for the president, does the president denounce white supremacism, and groups that espouse it in all their forms?

McEnany then offered other examples of Trump explicitly denouncing white supremacy, only to have Roberts repeat the question as if Trump had never disavowed the ideology.  Irked, McEnany saved her real riposte against Roberts for after the debate, when she put out a tweet:

.@johnrobertsFox I would refer you to your wife’s reporting from 21 hours ago… accurate reporting I cited in the White House Press Briefing. https://t.co/dV3Hzp1UaI

At this point, if Roberts was a secure alpha man, he would have said, “D’oh,” and gotten on with his life — and maybe apologized to McEnany.  Roberts, though, proved himself to be a true soy boy by having a full-blown, very public meltdown:

“And for all of you on Twitter who are hammering me for asking that question, I don’t care…Stop deflecting. Stop blaming the media. I’m tired of it.” pic.twitter.com/j6BDrcrj0D

Wallace and Roberts have proven themselves unworthy of holding the positions that they do.  People tune in to hear the news and intelligent commentary.  They don’t want to see weak, narcissistic men make blatant, partisan errors and then, instead of either owning up to their partisanship or apologizing, throwing blame around.  These are losers.  Fox News, therefore, should lose them.