Trump-COVID truthers: Michael Moore and others on the left suggest Trump is faking illness 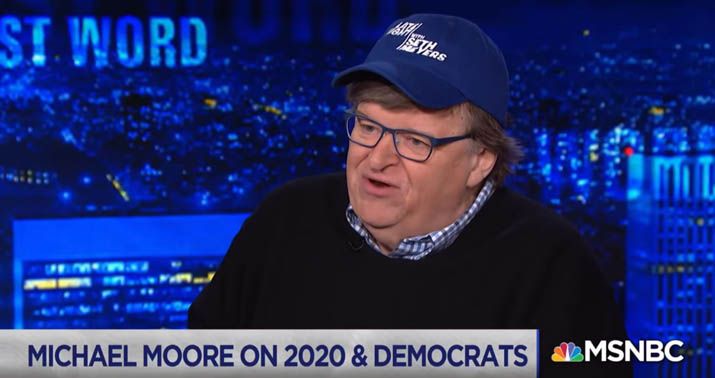 I mentioned this last night, but there’s a significant number of people on the left who are expressing skepticism of President Trump’s COVID-19 diagnosis. I saw random people on Twitter expressing this last night and figured it would die down by this morning. That doesn’t seem to be the case. On the contrary it seems to have picked up steam overnight, enough that even some people on the left are calling it out. Here’s Joy Reid saying it’s a lot of what friends are saying to her in text messages:

Here’s how wrecked Trump’s credibility is at this point: I’ve got a cellphone full of texts from people who aren’t sure whether to believe Trump actually has covid. “He lies so much,” one friend just texted. “Is he just doing this to get out of the debates?” others are texting.

Reid’s unnamed friend wasn’t alone in suggesting this was about the debates:

Seems like someone don’t wanna go back to the debate stage. 🤔🤔

As you can see, thousands of people are liking these tweets and nearly everyone responding (about 1,000 as I write this) seems to agree something suspicious is happening. But there’s lots more of this stuff circulating:

On the one hand, wild conspiracy theories are killing society, but in the other, this is one of the most pathologically dishonest humans in public life surrounded by amoral cultists.

He picked a great moment to indulge conspiracy theories. But again he’s not alone:

Until we hear from Walter Reed, I am skeptical. This White House cannot be trusted. https://t.co/6cUqE83ZJS

Trump is a vehicle for elite criminals’ dangerous agendas. He’s also a sociopath and constant liar in his own right. I don’t know the truth about his diagnosis. I do know that you should watch his backers, foreign and domestic, as closely as you watch Trump.

Questions people are asking me:
– what if Trump is faking, and claims a miraculous recovery?
– what if this is. Republican ploy to take Trump out?
– what if he uses this as an excuse to drop out?
I don’t even know how to answer, bc this is where we are as a country.

Honestly, when a man lies so damn much, am I wrong to imagine another cry of wolf for an October surprise? That Trump is claiming a positive test, will present as asymptomatic, or claim himself cured with bleach, then dismiss COVID again as a Democratic hoax? I’m wrong, right?

I will just say this…

The timing of Trump’s positive test is very interesting and solves a number of immediate problems for him.

So why is this happening? Well, one general theory for conspiracy theories is that people often assume important incidents have important causes. So JFK couldn’t have been shot in Dallas by a Marxist loser with a rifle, it had to be a big conspiracy of some kind. I think this is similar. This diagnosis shakes up the race with weeks to go before an election. So immediately some suspect there must be a bigger purpose and a plan behind it.

Michael Moore posted a long statement on Facebook laying out why he believes Trump could be faking this. I think it’s likely a lot of people on the left who are questioning this probably share his views:

We must always remain skeptical when it comes to Trump. He may have it. But it’s also possible he’s lying. That’s just a fact.

But why would he lie about this?…He would not want to admit he‘s come down with a hoax.

But — he’s losing the election. And he knows it. It’s not 2016. He was hated in 2016, but he’s hated even more now. Millions of Americans are ON FIRE and on the verge of serving him up a major league ass-whooping and a record landslide defeat.

So he needs – badly – to totally change the conversation about this campaign.

And he just has.

Democrats, liberals, the media and others have always been wrong to simply treat him as a buffoon and a dummy and a jackass. Yes, he is all those things. But he’s also canny. He’s clever. He outfoxed Comey. He outfoxed Mueller. He outfoxed 20 Republicans in the GOP primary and then did the same to the Democrats, winning the White House despite receiving fewer votes than his opponent. He’s an evil genius and I raise the possibility of him lying about having COVID-19 to prepare us and counteract his game. He knows being sick tends to gain one sympathy. He’s not above weaponizing this.

Most dangerously, HE MAY USE THIS TO PUSH FOR DELAYING/POSTPONING THE ELECTION. The constitution does not allow for this, but he doesn’t give a f*ck about the constitution. He and his thug Attorney General Barr have no shame and will stop at nothing to stay in power. He may even use this as an excuse for losing.

He may use his Covid as a pretext to drop out of the race and move Pence to the top of the ticket. Pence would temporarily become President, and then Pence could pre-emptively pardon Trump for all of his crimes.

So there you have it. A whole lot of people on the left are considering this sort of thing since last night. In fact, so many are saying it that there’s already a bit of a backlash to it on the left:

Trump faking Covid makes no fucking sense. His whole shtick has been minimizing Covid. This makes him look weak and stupid. https://t.co/nFk18kDIAD

People saying Trump is faking it are only slightly better than QAnon. Folks, they had military planes launched yesterday on the coasts 30 minutes before the announcement in the “dont fuck with us” warning signal to nuclear powers that we use at times like this. Stop being loony.

Now, the course of his infection may be another matter. I personally know people who got Covid-19 but insisted that it was a mild case — only to hear indirectly that it was actually very severe. Just saying 2/