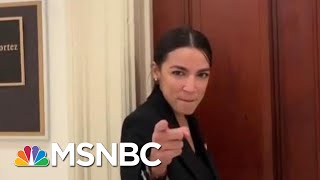 New Democrat in Congress, Alexandria Ocasio-Cortez is having one of the most impactful first months in office of any new member of Congress in a long time. Billionaires with decades of experience in public life are name-checking her proposal to tax people who many over $10 million. Attorney who represents Wall Street, Richard Farley and former activist and political organizer, Mark Thompson, join The Beat.
» Subscribe to MSNBC: http://on.msnbc.com/SubscribeTomsnbc

MSNBC delivers breaking news and in-depth analysis of the headlines, as well as informed perspectives. Find video clips and segments from The Rachel Maddow Show, Morning Joe, Hardball, All In, Last Word, 11th Hour, and more.