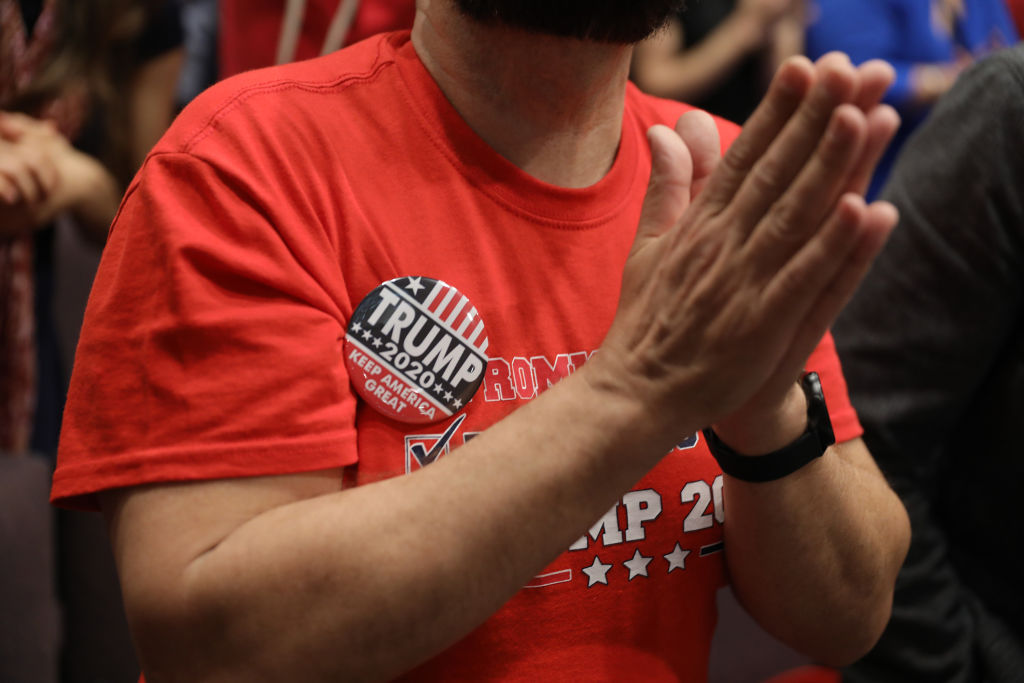 Joel Perez prays during the ‘Evangelicals for Trump’ campaign event held at the King Jesus International Ministry as they await the arrival of President Donald Trump on January 03, 2020 in Miami, Florida. (Photo by Joe Raedle/Getty Images)

On Tuesday, The Atlantic published a widely shared story titled “Trump Secretly Mocks His Christian Supporters,” in which anonymous sources claimed the president has been regularly dismissive or derisive toward this integral part of his base.

When I saw the byline, I was immediately suspicious.

The author, McKay Coppins, is an accomplished staff writer for The Atlantic whose 2015 book The Wilderness chronicled intra-party battles within the GOP in the lead-up to the 2016 presidential election. Much of it analyzed trends within the Republican Party before the rise of Donald Trump.

That meant significant coverage of my former boss, Senator Rand Paul, who was considered by some an early presidential frontrunner in that election. The book also covered the 2013 controversy regarding my relationship with Senator Paul given my controversial radio background, which was brought to light by the neoconservative Washington Free Beacon in July 2013. I addressed the controversy at length in Politico Magazine in November 2013.

Coppins’ account of my controversy recounted a number of things I had never heard of, while also leaving out significant developments at the time only known to myself, Senator Paul, and a select few others. Furthermore, Coppins’ overall portrayal of Paul and his relationship with his father, former congressman Ron Paul, didn’t reflect my experience working for both men in various capacities since 2010.

That said, I was willing to consider that there were possibly happenings I wasn’t aware of, particularly given the delicacy of my controversy.

But one passage, describing an exchange related to the Pauls’ father-and-son relationship in Coppins’ book, was flat out false.

I know because I was in the room when it happened.

I worked for Ron Paul’s 2012 presidential campaign and was backstage with the candidate before a GOP primary debate in Myrtle Beach, South Carolina, in January 2012, four months after he placed second in the Iowa straw poll.

Coppins wrote in The Wilderness, “A couple of weeks after losing Iowa, Ron was in the greenroom at a Republican primary debate in South Carolina when Jim DeMint and Lindsey Graham came up to him and began effusively piling praise on his son.”

“They gushed about how Rand was a joy to work with in the Senate, a real contributor, someone with whom they felt they could work with productively despite their ideological differences,” Coppins wrote.

This exchange happened. I was a few feet away when it did. To my knowledge, South Carolina senators DeMint and Graham welcomed all of the Republican primary candidates that night before the debate.

What Coppins wrote next was fantasy.

“Finally Ron snapped, ‘Well, if he’s so great, he should run for president himself,’” Coppins reported.

“DeMint was taken aback by the outburst and quickly shut up,” Coppins claimed. “But Graham didn’t seem to catch on, because he just kept spurting commendations for Rand in his courtly Southern drawl, as Ron’s face twisted into a cranky scowl.”

This did not happen.

In The Wilderness, Coppins portrays Ron Paul as being jealous of his son’s success. Anyone who has ever been in the family’s orbit knows this is completely ridiculous. When I shared this passage with some people who had worked for Paul’s presidential campaign, they all laughed. When I shared it this week with someone who still works for Ron Paul and speaks with him most days, he thought it was hilarious.

When I shared it five years ago with the only other two staffers I recall being in the room beside myself when this exchange happened, they both found it absurd. No one thought to push back or correct the record at the time because it was just one part of one book that had not become part of the news cycle.

But this week, after Coppins’ story in The Atlantic critical of President Trump made waves, I reached out again to the two staffers whom I served with in 2012. They agreed that this did not sound like Ron Paul or that this interaction did not take place in the way that Coppins described.

Both requested to remain anonymous.

Not only did I witness the entire exchange myself up close, but I spoke to Senator DeMint immediately afterward, as we had recently worked together on a book project. He was chipper. In fact, the three men involved in that pre-debate discussion that night—Paul, Graham, DeMint—were cheerful and there was no tension. It was friendly and diplomatic.

There were certainly no angry “snapping,” “outbursts,” or “cranky scowls” from Ron Paul, nor was DeMint “taken aback” by alleged emotional reactions that did not happen.

One of the anonymous staffers in the room reiterated to me in an email on Tuesday, “Coppins made up those things about Ron.”

This person added, “I was around Ron and Rand a lot and none of that is familiar to me.”

Right after Graham and DeMint left Paul’s greenroom that night in 2015, I immediately texted a close libertarian-leaning friend about the exchange. My excitement was over how the interaction went, given that the habitually hawkish Graham had long been a harsh critic of antiwar Republicans Ron Paul and his son Rand.

That friend was Jim Antle, former editor of The American Conservative and current political editor at The Washington Examiner. When I reminded him of Coppins’ 2012 account of this interaction, he wrote in an email on Tuesday, “I remember you describing this exchange immediately after it happened, way before Coppins wrote about it, and it being nothing like this.”

So how did Coppins come up with this snapshot of an angry Ron Paul seething with jealous rage over his senator son’s political success?

Coppins described in The Wilderness how he used anonymous sources, “Where dialogue is quoted, it is based on the recollection of the speaker or someone else who was present for the conversation. If sources could not remember or agree on the specific wording, I reconstructed the dialogue without using quotation marks.”

Coppins used quotation marks when he quoted Ron Paul allegedly saying, “Well, if he’s so great, he should run for president himself.”

If Ron Paul said this, it is highly likely he was being tongue in cheek. Not out of anger or jealousy.

Coppins continued, “Similarly, the considerable sections of the book that portray the various subjects’ internal thoughts and feelings are based on descriptions from the subjects themselves, or from people in whom they confided; though my characterizations that comprise direct quotes, they represent a sincere effort to accurately and empathetically capture the subjects’ thinking.”

The only other people in the room to my recollection that night were Senators Graham and DeMint. I would love to hear how they remembered this exchange, which would likely differ significantly from Coppins’ account.

Coppins was not in the room that night. I do not know what other source from whom he would have possibly gathered such (mis)information.

If it was Senator Graham, why would he trust someone who has been so vocally anti-libertarian? It also raises questions of whether the author is allowing Never Trumpers or disgruntled ex-aides to characterize the president.

Such methodology could be problematic, to say the least.

For the record, as of now, I do not plan on voting for Donald Trump for president on November 3. I plan to vote for Libertarian Jo Jorgensen. I am not interested in running cover for or defending any current presidential candidate.

I have no idea how valid Coppins’ claims are regarding Trump’s supposed secret attitude toward his Christian supporters as described in his recent story. Nor do I question the integrity of The Atlantic’s journalistic policies and standards.

But this is my experience with McKay Coppins’ reporting thirdhand information about a situation where I was in the room and he was not. Is it unreasonable to ask if there are similar discrepancies in his recent negative story about President Trump?