Around the same time a lot of us were feeling pretty raw at the news of President Trump’s COVID diagnosis, another sad piece of news floated through on Twitter:

Driving home from the hospital with no baby. How can this be real.

So it was striking to see this series of tweets: 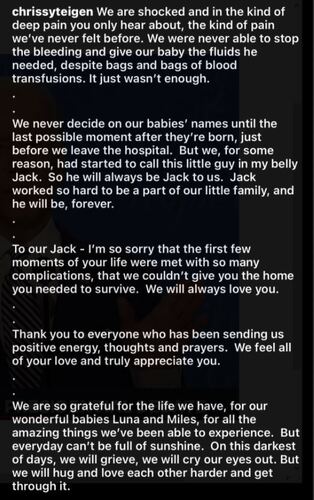 No cuss words in it. Just honesty, a moving statement of sorrow for a lost baby whom she loved very much. Apparently, there’s a good side of her she never reveals in her Hollywood persona. Her Instagram had this moving picture, obviously taken by a professional photographer and grayed to black and white, making its message more powerful: 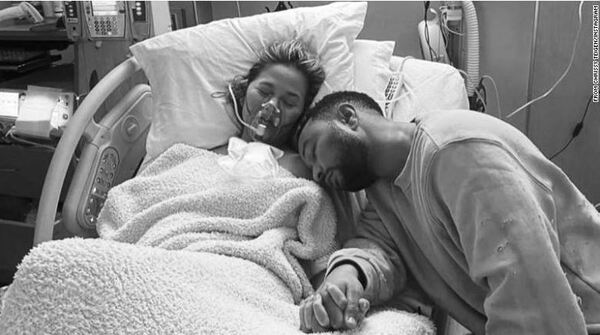 CNN wrote a long piece about Teigen’s candor in letting it all hang out. It described the discussion of miscarriages as generally taboo, making her tweets all the more unusual.

What it didn’t mention was what anyone else might be thinking at reading this beautiful tribute: That baby was a person. And that person was loved. And because he was loved, that person was grieved over when he unexpectedly died.

It was a baby, and she and her husband, composer John Legend, are going to remember their baby. He had a name, ‘Jack,’ and was no ‘blob of tissue,’ as the Planned Parenthood establishment puts it.

It’s an unexpectedly powerful pro-life statement, stating that a baby is a baby and is a loved person even inside the womb. He doesn’t come into existence after birth, he’s a person with a loving mother well before it.

It’s probably the most pro-life statement of the entire year, the kind of statement that is likely to change minds. She drew ten million ‘likes’ on her Instagram account.

I have no idea if Teigen will change her pro-choice views after this, but if she did, it would signal a sign of moral order. Contradictions exist in all kinds of people all the time, so no need to be surprised if it doesn’t. But it still might mean she grows.

There was some tut-tutting from CNN about the controversy of Teigen revealing every detail of this news on Twitter, but that’s nonsense. She’s reality TV star of various sorts so of course she’s going to reveal everything that goes on in her life on Twitter. She may have revealed too much information to them, but to the rest of us, she revealed with great force the truth.