Trump doctors: He could be released tomorrow — even though we gave him a steroid yesterday 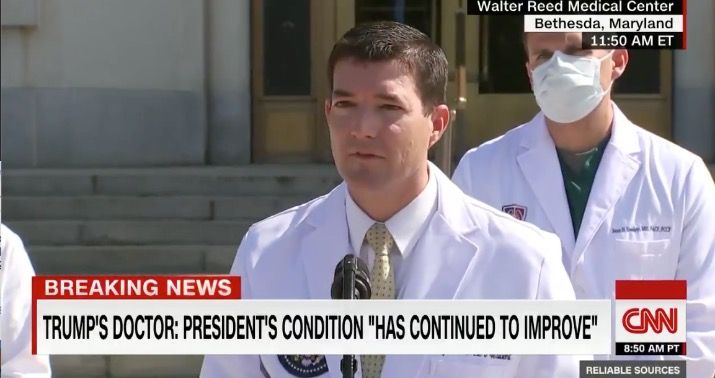 There was excellent news this morning when one doctor said at the daily press briefing that if he continued to respond well to treatment, he could be discharged as soon as Monday.

The less excellent part is that that’s very hard to square with the revelation that he’s already received the steroid dexamethasone. Why? Because “dex” is the drug you give to patients with severe COVID, not those who are still early in the course of their illness. The early drug is remdesivir, which Trump is also receiving. That’s an antiviral, aimed at preventing the virus from spreading. Dexamethasone is what you give when the virus has already spread. It’s an immunosuppressant. It can relieve inflammation around the lungs that may be inhibiting breathing. It may also help calm the immune system when it’s running so hot in trying to fight off the virus that it ends up attacking one’s own organs, a potential late-stage problem.

All of that being so, it’s difficult to understand why any patient would get remdesivir and dexamethasone at the same time. You get remdesivir when you want your immune system to be ramping up, to beat back the virus. (That’s why Trump got the Regeneron antibody treatment too.) “Dex” would only retard that desired immune response, one would think. A Times story about the steroid published this summer noted, “It may be less likely to help — and may even harm — patients who are at an earlier stage of Covid-19 infections, however. In its Covid-19 treatment guidelines, the National Institutes of Health recommends only using dexamethasone in patients with Covid-19 who are on a ventilator or are receiving supplemental oxygen.”

Stat is alarmed at the revelation about dexamethasone:

Trump’s doctors confirmed Sunday that the president received oxygen for about an hour on Friday after a temporary drop in his oxygen levels. Sean Conley, the president’s physician, told reporters on Sunday outside Walter Reed National Military Medical, where Trump is being treated, that the president also experienced a “transient” drop in oxygen levels Saturday but said that he wasn’t sure if oxygen was given.

Conley said that drop in Trump’s oxygen saturation to 93% on Saturday morning prompted the decision to initiate the steroid therapy, believing “the potential benefits early on in the course” outweighted any downsides.

That’s why they gave it to him — he needed oxygen. In fact, Conley said this morning that Trump’s blood oxygen saturation has dropped to concerning levels twice now. He was asked yesterday whether the president had received supplemental oxygen at any point and was evasive, but today he came clean and admitted that he had. When reporters asked him why he’d been deceptive when the public is begging for clarity, he gave this Baghdad Bob-ish answer:

Trump’s doctor says he didn’t admit yesterday that Trump was put on oxygen because he was trying to be publicly upbeat. “I didn’t want to give any information that might steer the illness in another direction.” pic.twitter.com/luMyDyacZH

He was trying to be “upbeat” because he didn’t want to steer the course of the illness in a bad direction? Did he think the virus was listening to him yesterday like some Russian spy, ready to exploit sensitive information if Conley admitted it publicly?

One of the reasons many of Trump’s critics glibly compare him to a dictator even though he rarely asserts his more autocratic impulses (remember when he tweeted about possibly delaying the election?) is because the culture of cronies around him resembles how a caudillo’s retinue behaves. Even his doctor can’t get through a press conference about him without deceiving the public because the leader will be angry at him if shares any evidence of “weakness.” Never mind that the “weakness” in this case was something as simple as Trump needing oxygen because of COVID, something hundreds of thousands of Americans have coped with and can sympathize with.

Conley was also asked today what condition Trump’s lungs are in and, surprise, he was evasive:

Reporters also pressed Conley whether Trump’s oxygen levels had ever dipped below 90%, and he would only say that “We don’t have any recordings here of that.” Asked further if Trump had ever registered an oxygen level below 90% at any point since his diagnosis, whether at Walter Reed or at the White House, Conley demurred.

A blood oxygen saturation in the mid-80s can still be a concern.

Asked specifically if doctors had found signs of pneumonia in or damage to the president’s lungs, Conley would only say “we’re tracking all that” and that there have been “some expected findings, but nothing of any major clinical concern.” Conley also repeatedly avoided answering any questions about Trump’s lung scans.

Why is it important to know what Trump’s lungs looked like? Because if there’s evidence of pneumonia, that’s a big deal:

… But it seems far likelier that they found evidence of pneumonia or other manifestations of Covid lung involvement or inflammation, which is serious and raises the level of concern and risk. (4/8)

“Bottom line: it seems like Trump is stable, but remains at high risk, given transient hypoxemia, some findings on chest imaging. The happy talk and evasions are clearly at Trump’s direction, putting the docs in a terrible position. No way he’s ready for discharge tomorrow,” said Wachter, the chair of UCSF Medicine. Conley’s credibility is shot. Throw it on the pile with everyone else’s.

We’re left with the unanswered question: When did Trump get infected? How far into this disease is he, exactly? It seems bizarre that within 48 hours of diagnosis on Thursday night — if in fact he was diagnosed on Thursday night — he’s already at the stage where he needs dexamethasone. “Two possibilities,” said Dr. Jeremy Faust yesterday. “A) President recently got infected and has a HUGE viral load, such that his symptoms occurred very early (worrisome). B) President was infected many days ago, 4-7 days or more, but had not been tested—or had a positive test but continued usual schedule.” Other doctors share Faust’s conclusion. How long has COVID been attacking Trump’s system?

I’d be curious to hear from doctors or nurses out there as to whether they’ve ever heard of a patient needing dexamethasone and then being discharged within two days. I’m sure there are exceptions to every rule, but that is the exception, not the rule, right? Exit question: Given how concerning Trump’s symptoms are, why the hell would his doctors tease the possibility of releasing him tomorrow? If they end up having to hold him, which seems plausible if not likely, it’ll only instigate another round of “Trump is sicker than they’re letting on” speculation.

Dr. Brian Garibaldi, who is part of Trump’s medical team, said the President could be discharged from Walter Reed medical center as early as Monday.