Was it voter fraud or a case of “testing the system?” 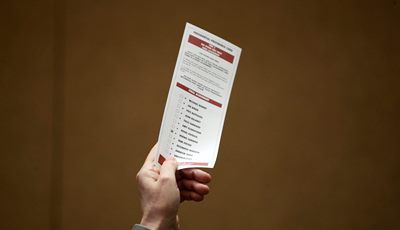 One Florida Democrat came up with a clever way to pay homage to his deceased wife during the upcoming election. When ordering a mail-in ballot for himself, he decided to request one for her as well. The request was honored and he filled them both out and mailed them in. Unfortunately for 62-year-old Larry Wiggins, the discrepancy was noticed when the ballots arrived at the office of the Supervisor of Elections. Wiggins was investigated and arrested. The excuse he offered was a novel one, however. He wasn’t trying to commit election fraud. He was just “testing the system.” (NY Post)

Florida authorities nabbed a registered Democrat after he attempted to “test the system” by requesting an absentee ballot for his late wife, officials said.

Manatee County Sheriff’s Office began investigating Larry Wiggins, 62, after the mail-in ballot was requested for his wife who had been dead for two years, the Bradenton Herald reported.

“As soon as they pulled up the file it showed that she is dead,” Manatee County Supervisor of Elections Mike Bennett said.

Bennett said his office then compared the handwriting on the ballot request with previous documentation and found it wasn’t a match.

Wiggens was charged with third-degree felony voter fraud and released on $1,500 bail.

It would be easy to write off this almost amusingly dumb scheme as little more than a case of a tone-deaf voter trying to game the system. But the response to the report from the Manatee County Supervisor of Elections was a bit over the top and serves as a reminder of the magnitude of the potential problems that may be coming our way on November 3rd. Supervisor Mike Bennett (R) was quick to crow about his office’s success in foiling Wiggins’ scheme and held it up as proof that “the system worked.”

Bennett said the case is an example of why voters should feel confident in the elections process.

“People complain that vote by mail is crooked; it’s not, we catch them, we verify it and any supervisor of elections in the state of Florida I know is just as conscious about it as I am,” he said.

I suppose congratulations are in order for Mike Bennett since his office clearly managed to catch Wiggins’ effort at gaming the system. But that means that someone was alert and doing their job when the dead wife’s ballot arrived. It might not have been a very busy office, however. (Manatee County is in a rural area and has a total population of barely 300,000.) And we’re talking about early voting here. How well will they do when a serious flood of ballots starts coming in?

Also worth noting is the fact that when Wiggins requested the ballot on his late wife’s behalf, they didn’t notice that she was dead, did they? No, they mailed the ballot out. That means that Mrs. Wiggins was still on the voter rolls. Bennett claims that they knew she was dead “as soon as they pulled up the file.” Which file would that be? And why didn’t they “pull it up” when Wiggins originally requested it? Note that this wasn’t a case where they were mass-mailing ballots out to everyone. Wiggins specifically requested absentee ballots for both himself and his wife.

I can’t help but wonder how Mrs. Wiggins’ name wasn’t flagged when the ballot was initially requested if the system is so secure. It strikes me as equally likely that somebody working in Bennett’s office in this rural area saw the submitted ballot and personally knew that the woman had passed away two years earlier. So what happens if more ballots like this phony one show up and the person entering them doesn’t recognize the name? Will they still catch it?

I suppose it’s possible, but the details of this story don’t do much to instill confidence in the integrity of the system. Also, let’s not forget that Florida is a pretty big state with a burgeoning population of nearly 21.5 million. Do you really believe that Larry Wiggins was the only bonehead to cook up an idea like this to “test” the system? Color me dubious at best.