Armenians Are In Danger of Ethnic Cleansing Once Again 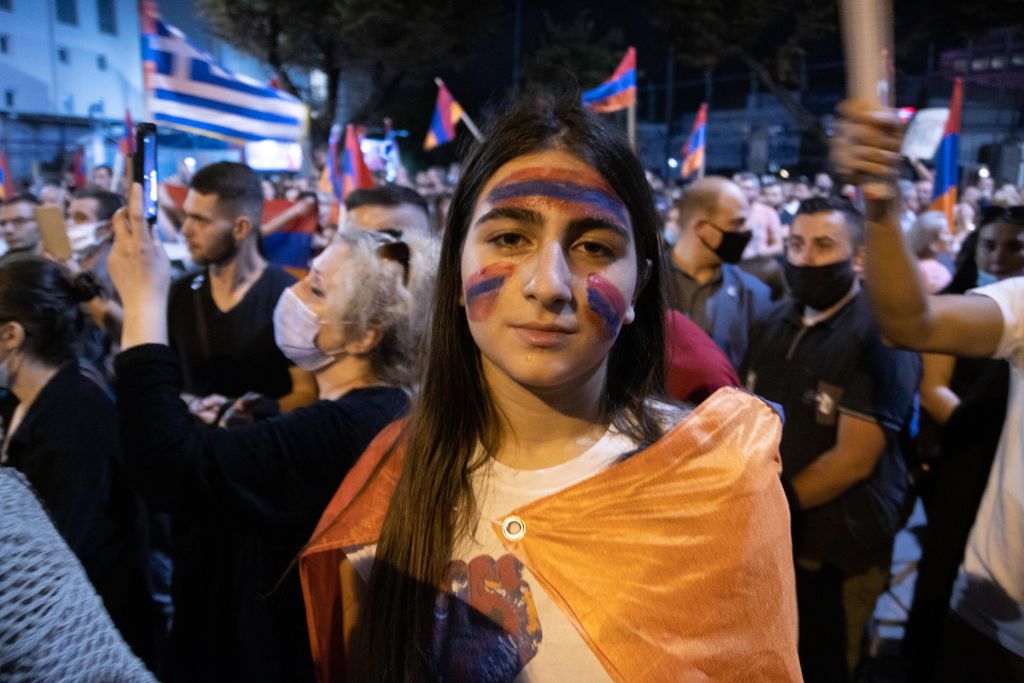 Armenian people with the support of the Committee of Armenians, the local community and Greeks demonstrate in front of the White Tower, the symbol of Thessaloniki city in Greece on 03 October 2020 in support of Artsakh and they protest against the war that broke out in recent days in Nagorno-Karabakh between Armenia and Azerbaijan with the support of Turkey. The rally is about Azerbaijan’s aggression against the Armenian people with full support from Turkey as Azerbaijan launched attacks. Thessaloniki, Greece (Photo by Nicolas Economou/NurPhoto via Getty Images)

Since September 27, Azerbaijan has unleashed an aggressive war against the Armenian people of Nagorno-Karabakh, also known as the Artsakh Republic, in south Caucasus. With the direct support it receives from Turkey, Azerbaijan is indiscriminately bombing residential areas across the region. Through these assaults, Azerbaijan and Turkey are once again endangering the existence of Artsakh and the survival of Armenia.

Meanwhile, many children and women in Artsakh are sheltering in basements to escape violence, reports the Armenian media. Heavy casualties were reported in the region’s capital, Stepanakert, which was left without electricity, according to Armenpress News Agency.

It is not only Azerbaijan and Turkey attacking Armenians. Around 1,000 Syrian jihadists were deployed by Turkey to fight against Armenians, according to the testimonies of some Syrian mercenaries. France and Russia have also accused Turkey of sending Syrian jihadists to Artsakh.

On October 1, Azeri bombardment injured four journalists covering the war. According to Reporters without Borders:

A reporter for the French daily Le Monde and a French photographer accompanying him had to be hospitalized for urgent treatment to their injuries. Armenia TV cameraman Aram Grigoryan and a reporter for the Armenian news agency 24news.am, Sevak Vardumyan, were also injured.

Several other journalists, including an Agence France-Presse crew and a deputy editor-in-chief sent by the independent Russian TV channel Dozhd, narrowly escaped being hit by the shelling. All of the journalists and their vehicles were clearly identified and bore the word ‘press.’

We are facing a fateful chapter in our history. The objective the Azerbaijani-Turkish bandits pursue is not to resolve a military or a military-political task. They are not here to deal with Karabakh or the Karabakh issue. They have not come with the objective of capturing territories, villages, cities. Their key target is the Armenian nation. Their objective is to carry on with their genocidal policy. And they have set themselves the task of bringing to completion the Armenian Genocide.

Pashinyan was referring to the 1913-23 Christian Genocide by Ottoman Turkey against Armenians, Assyrians, and Greeks. Turkey still aggressively denies this crime. A century ago, Ottoman Turks used swords and starvation as tools to wipe out Armenians and other Christians. Today, their assaults are enabled by missiles, artillery, and aerial bombardment.

Meanwhile, casualties keep surging. According to Armenian sources, the total death toll in the Artsakh military has reached 198. Azerbaijani authorities have not given details on their military casualties. “Civilians are bearing the brunt of surge in violence,” reported the International Committee of the Red Cross on October 2. They added, “Civilian deaths and injuries, including of children, have been reported on both sides of the line of contact, and in Armenia.”

The Turkish government and media, however, are portraying Armenia as the aggressor. Turkish President Recep Tayyip Erdogan said: “Once again I condemn Armenia that attacked Azerbaijani lands yesterday. Armenia must withdraw from the places it occupies. The crisis that started with the occupation of Nagorno-Karabakh in the region must be put to an end.”

“Turkey will continue to support Azerbaijan,” he added. “The developments have provided an opportunity for all countries with influence in the region to put into practice their realistic and fair solution methods. With the immediate abandonment of the occupied Azerbaijani territories by Armenia, the region will regain peace and tranquility.”

President Ilham Aliyev of Azerbaijan also said on October 3 that Armenia and its military forces “need to leave our territory, and then, the war will stop and then the conflict will come to an end.”

Through these words, Erdogan and Alivey engaged in their regimes’ ultimate expertise: historical revisionism. Contrary to their allegations, Artsakh or Nagorno-Karabakh has been part of the Armenian cultural and historical identity for millennia. Turks are not native to Turkey nor the south Caucasus, and this includes Turkic Muslim Azeris. Artsakh that Aliyev is claiming has been inhabited by Armenians for thousands of years before any invading Turkic tribe came from the east. As Zoryan Institute, a human rights research organization, states:

In the seventh and eighth centuries much of this area was conquered by Arabs, who converted a portion of the population to Islam. In Karabagh, only a very small minority was converted. The situation of Karabagh changed radically in the eleventh century when the ethnic Turkish invasions began. The Turks had emerged from Central Asia, had conquered Iran, and founded the Seljuk Turkish dynasty, which first raided, then invaded Armenia.

The European Armenian Federation for Justice and Democracy (EAFJD) reports:

Mountainous Karabakh, the mountainous areas of the historic Armenian province of Artsakh, has formed part of Armenia throughout history. Its Armenian roots reach back to before the first millennium BC. Armenian princely dynasties successively presided over Artsakh (Karabakh), guaranteeing its sovereignty through treaty arrangements with neighboring powers.

Despite foreign invasions and rules throughout centuries, Artsakh mostly had semi-independent status as an Armenian entity and remained predominantly ethnically Armenian. Yet this significant fact has been completely ignored or denied by Azerbaijan and Turkey.

Nagorno-Karabakh became a part of Tsarist Russia in 1813. The dispute over the region between the Nagorno (Mountainous or Upper) Karabakh Armenians and Azerbaijan dates back to the 1917 Russian Revolution and the collapse of the Russian Empire.

In May 1918, both Azerbaijan and Armenia declared their independence. It was the first time in history a state named Azerbaijan was founded. Two months later, Karabakh Armenians also attempted to exercise their constitutional right to self-rule. Edita Gzoyan, deputy scientific director at the Armenian Genocide Museum-Institute Foundation, notes:

WWI and the Bolshevik Revolution created a new political-historical situation in Transcaucasia. On November 15, 1917, the Bolshevik government adopted a Declaration of the Rights of the Peoples of Russia, which among other provisions declared the right of secession and the formation of independent states within the territory of the Russian Empire. Taking advantage of this in sync with the establishment of Transcaucasia republics, on July 22, 1918 the First Congress of Armenians of Nagorno-Karabakh declared the region a separate administrative unit.

In response, Azerbaijan resorted to wanton violence. From 1918 to 1920, it carried out massacres against the Armenian population. According to the EAFJD, “As a result of the Turkish Azerbaijani aggression in 1918-1920 aimed at totally cleansing Mountainous Karabakh of Armenians, an estimated 20 percent of all Armenians were killed.”

Today, Azerbaijan claims Nagorno-Karabagh only because Soviet dictator Joseph Stalin, who ignored the demography and history of the region, placed it under the administration of Soviet Azerbaijan as an autonomous region in 1921.

The current problems plaguing the region are traced to the transfer of Mountainous Karabagh to Azerbaijan at a time of cooperation between Soviet Russia and the Nationalist Turkish leadership. For Azerbaijan, the fact that the majority of the Mountainous Karabagh population is Armenian is incidental and secondary to other facts: Karabagh is theirs now and it has been part of the development of Azerbaijani national consciousness, largely a post-sovietization phenomenon. Azerbaijani nationalists consider Karabagh part of their homeland whence have come many of the country’s intellectuals and political leaders. Finally, any change in the status of the territory would be considered at the present time an unacceptable blow to Azerbaijani national pride.

According to the report, after “the region was annexed to Azerbaijan between 1920 and 1923, the Azerbaijani government developed a policy of economic and social discrimination and political repression, making life intolerable for its citizens in a variety of ways.”

In the face of severe persecution at the hands of Azeri forces, Armenians began to take steps to break free of Azerbaijani control in 1987. Karabakh Armenians sent tens of thousands of signatures to Moscow to petition for union with Armenia. Nagorno-Karabakh’s regional parliament also officially requested recession from Soviet Azerbaijan in accordance with Soviet constitution, i.e. the law on secession.

In response, Soviet Azerbaijan targeted defenseless Armenian civilians in pogroms and massacres in several Azerbaijani cities. An anti-Armenian pogrom rocked the city of Sumgait in 1988, which was followed by pogroms in Kirovabad in 1988, in Baku in 1990, and other Azerbaijani towns.

Meanwhile, Soviet Azerbaijan pursued policies to alter the demography of the region.

“From January to May 1991,” reports EAFJD, “the inhabitants of 24 Armenian villages in Mountainous Karabakh were forcibly driven from their homes. Soviet Azerbaijan placed more than half of Mountainous Karabakh’s territory under military occupation.”

On September 2, 1991, the people of Nagorno-Karabakh declared independence from the Soviet Union. As usual, Azerbaijan responded with violence and launched a full-scale war against Nagorno-Karabakh, targeting civilians. During the 1991-1994 war, Azerbaijan carried out indiscriminate mass bombardment of Nagorno Karabagh, which resulted in the whole or partial destruction of villages and towns. The war destroyed an estimated 80 percent of the regions’ economy.

Since 1992, the Organization for Security and Co-operation in Europe (OSCE) Minsk Group, chaired by France, Russia, and the United States, has been mediating conflict resolution, but without any tangible results.

The EAFJD sums up the history of Azeri aggression against Armenians:

From the onset of the Karabakh Movement in 1988, Azerbaijan has resorted to attacks against Armenian citizens, declared war and imposed a complete blockade against Mountainous Karabakh. It attempted to isolate the Armenian population of Karabakh from the international community and create unbearable living conditions. These actions were condemned by world governments. In particular, the 1992 Freedom Support Act by the U.S. Congress restricted any direct assistance to Azerbaijan due to the blockade.

Azerbaijan continues its blockade of Artsakh and Armenia. Since 1993, Turkey has also imposed a blockade on Armenia. Today Armenia and Artsakh are landlocked, genocide survivor states blockaded by Turkey and Azerbaijan, trying to resist the military aggression of both regimes.

What Turkey and Azerbaijan are attempting is the erasure of Armenians from the region, not only the Armenian people, but also the Armenian cultural heritage. The Guardianreported in 2019:

The 21st century’s most extensive campaign of cultural cleansing to date may not have happened in Syria, as you might assume, but a largely ignored part of the Transcaucasian plateau.

According to a lengthy report published in the art journal Hyperallergic in February, the Azerbaijani government has, over the past 30 years, been engaging in a systematic erasure of the country’s historic Armenian heritage. This official, albeit covert, destruction of cultural and religious artefacts exceeds Islamic State’s self-promotional dynamiting of Palmyra, according to the report’s authors, Simon Maghakyan and Sarah Pickman.

Maghakyan, a Denver-based analyst, activist and lecturer in political science, labels it ‘the greatest cultural genocide of the 21st century.’

Turkey and Azerbaijan, whose total populations are over 100 million, are once again targeting the Armenian homeland of around 3 million people. They are utilizing modern arms to complete their century-long goal of ethnically cleansing Armenians from the region.

The fact that Artsakh remains internationally unrecognized makes it even more vulnerable in the face of the military aggression by Azerbaijan and Turkey. Following the constitutional referendum in Nagorno-Karabakh on February 2017, the country was renamed the Artsakh Republic. It is time for the West to officially recognize the Armenian right to self-determination and the Artsakh Republic in order to help stop Turkish and Azeri aggression.

Uzay Bulut is a Turkish journalist and political analyst formerly based in Ankara. Her writings have appeared in The Washington Times, The American Spectator, The Christian Post, The Jerusalem Post, and Al-Ahram Weekly. Her work focuses mainly on human rights, Turkish politics and history, religious minorities in the Middle East, and antisemitism.