On September 27, Dan Bongino, Fox News contributor, host of one of the most popular political podcasts, and bestselling author (and prior to all of that a Secret Service agent who served on the presidential protection detail and a NYC police officer), appeared on Fox and Friends (6–9 A.M. E.T.) and confirmed that he had a serious health issue involving a tumor in his neck.  Earlier this morning, in a live follow-up segment on the same program, Bongino, 48, appearing from a hotel room in NYC, announced that he would be having surgery at a New York hospital on Wednesday to determine the extent of the tumor and its treatment.  Bongino tweeted the video of his Fox News appearance this morning here.

On his radio program on September 22 and on Fox News last week, Bongino revealed that he is susceptible to benign growths called lipomas — although the current tumor on his neck, measuring 10 cm by 7 cm, has been determined not to be a lipoma after an MRI. 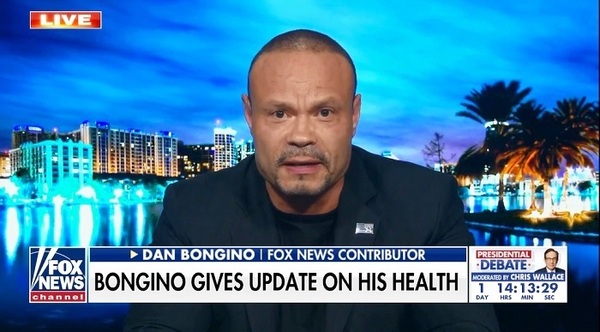 I get lipomas — fatty tumors once in a while. They’re benign, I’ve never had any issue with them at all and I noticed there was a lump on the left side of my neck about two weeks ago. I thought it was from grappling — I had gotten choked out a couple of times, I didn’t think any of it so I went to get an MRI thinking it was a lipoma and when I rolled out of the machine, there is nothing worse than having a radiologist look at ya and I said “It’s a lipoma, right?” And he said “no, it is not a lipoma.”

I missed Tuesday’s [Hannity Sept. 22] show that night. I never cancel on Sean, ever. I’m always on on Tuesday and when he found out, he called. He spent two hours on the phone and connected me to I think every doctor known to humankind that could help me out. Thanks to him, I got a biopsy and I’m hoping to get the results today and, obviously, hoping for the best.

To this point, Bongino has not revealed the results of the biopsy — noting only that he will be having surgery on Wednesday, October 7.

At this time, we at American Thinker would like to request that our readers — many of whom are sincerely faith-based and prayerful — please consider keeping Dan Bongino in your thoughts, heart, and most importantly prayers in the days ahead.

In my career as an investigative journalist, I spent decades reporting on health care issues with a particular focus on credible innovative alternative therapies.  In 1992, I was appointed as one of the first advisers to the National Institutes of Health’s new Office of Alternative Medicine.  I mention this experience now because at the time, the most prominent “alternative therapy” confirmed in published studies in the peer reviewed medical and scientific literature was prayer — not only prayer for one’s own healing, but prayer — intercessory prayer — on behalf of others.

Preliminary studies on the value of intercessory prayer, including ones cited in the prolific popular works of Larry Dossey, M.D., noted the potential efficacy of prayer as a credible healing modality.  People of faith who believe in the power of prayer, needless to say, do not need scientific studies to convince them.

Now is the time to direct our prayers — and our positive thoughts — for his quick healing to our friend and our brother-in-arms, Daniel Bongino.

Peter Barry Chowka is a veteran journalist who writes about politics, media, popular culture, and health care for American Thinker and other publications.  He also appears in the media, including recently as a contributor to BBC World News.  Peter’s website is http://peter.media.  His YouTube channel is here.  For updates on his work, follow Peter on Twitter at @pchowka.