For Secret Service, a New Question: Who Will Protect Them From President? 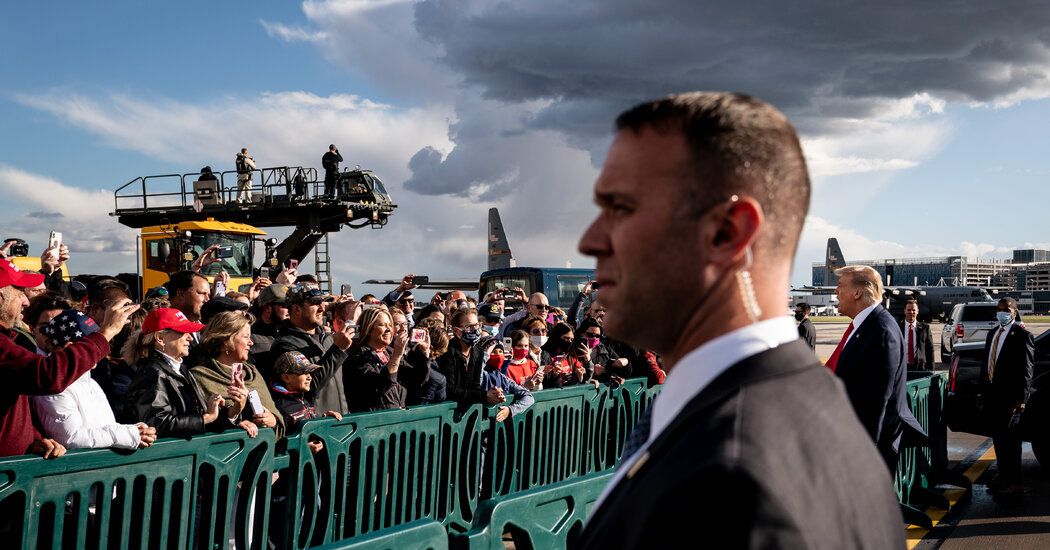 WASHINGTON — For more than a century, Secret Service agents have lived by a straightforward ethos: They will take the president where he wants to go, even if it means putting their bodies in front of a bullet.

But that guiding principle has been tested in recent days by President Trump’s desire to get back to work, play or campaigning, despite an active coronavirus infection that could pose a serious threat to those around him.

The problem came into focus on Sunday, when a masked Mr. Trump climbed into a hermetically sealed, armored Chevy Suburban with at least two Secret Service agents — covered head to toe in the same personal protective equipment used by doctors — so the president could wave to a group of supporters outside Walter Reed National Military Medical Center in Bethesda, Md.

Medical experts said the move recklessly put agents at risk. Secret Service personnel have privately questioned whether additional precautions will be put in place to protect the detail from the man they have pledged to protect.

“It’s on everybody’s mind,” said W. Ralph Basham, a former director of the Secret Service and the commissioner of U.S. Customs and Border Protection in the George W. Bush administration. “The ones no longer there are happy they’re not there. These are tough decisions to have to make.”

On Monday evening, Mr. Trump again appeared intent on endangering the agents around him when he was set to travel by helicopter back to the White House after being discharged from the hospital.

Central to the job of Secret Service agents is a willingness to say yes to the president no matter what he asks. Now, that means subjecting an agent’s health to Mr. Trump’s whims.

Critics say the president is not repaying his protectors’ dedication with anything like care or consideration. While agents have volunteered to sacrifice themselves for those they protect, they do so knowing that there is a low chance they will need to step in between a gunman and the president.

“If they’re on the protection detail, they’ll take a bullet for their protectee,” said Janet Napolitano, President Barack Obama’s first homeland security secretary. “There’s a difference between that and being unnecessarily exposed to risk,” she added, one that extends to their families.

“There was nothing about his little motorcade yesterday that was required or wise or necessary,” she said on Monday. “It was a superfluous act.”

Secret Service agents have always needed to make last-minute adjustments based on the political whims of presidents, said Michael Beschloss, a presidential historian. And the relationship between presidents and their protection details has usually allowed for a limited amount of debate. But in the end, presidents have an appetite for making public appearances before their supporters, allies and in some cases, adversaries. And the president has final say.

“These are people that have volunteered to give their lives for theirs, and almost every president I can recall uses that privilege carefully and with great respect,” Mr. Beschloss said.

Mr. Trump responded to the criticism on Monday by blaming the news media.

“I got into a secure vehicle to say thank you to the many fans and supporters who were standing outside of the hospital for many hours, and even days, to pay their respect to their President,” he posted on Twitter. “If I didn’t do it, Media would say RUDE!!!”

Rand Beers, a former acting secretary of the Department of Homeland Security, acknowledged that presidents were obliged to convey “to the nation that things are on track.”

“But,” he added, “you’re still putting agents at risk if you’re not taking precautions.”

The day after Mr. Trump’s ride, Representative Bennie Thompson, Democrat of Mississippi and the chairman of the House Homeland Security Committee, demanded a briefing from the Department of Homeland Security to learn more about the safeguards in place for the agency’s employees and specifically the protection detail.

“The height of reckless disregard for others was the president’s joy ride yesterday, where Secret Service agents were required to drive him around in a hermetically sealed vehicle,” Mr. Thompson said. ”Exposing Secret Service personnel to the virus does not just put them at risk, it puts their families and the public at risk.”

As other law enforcement agencies have, the Secret Service has also been forced to overcome a string of daunting obstacles created by the pandemic. Mr. Trump and his Democratic opponent in the election, former Vice President Joseph R. Biden Jr., have continued to travel, and the nature of protection does not allow for social distancing.

Before Mr. Trump held an indoor rally in Tulsa, Okla., in June, at least two members of the Secret Service who were preparing for the event tested positive for the virus. A planned trip by Vice President Mike Pence to Arizona in July was canceled after several members of his security detail contracted the virus.

The New York Times reported on Friday that the agency had sustained an outbreak at its training facility in rural Maryland in August, after trainees were believed to have held a graduation dinner inside with social distancing. That outbreak, in which at least 11 people tested positive, occurred despite the agency’s decision to shutter the facility to establish procedures to prevent transmissions.

Asked about Mr. Trump’s ride on Sunday, Justine Whelan, a spokeswoman for the Secret Service, said in a statement that the agency “does not discuss our protectees or the specific means and methods regarding our protective mission.”

The agency has not released a total number of confirmed coronavirus cases among its work force.

“We are sort of in uncharted waters here,” Mr. Basham said, adding, “At the end of the day, the job is what it is. You can’t do this on a Zoom call or a remote sort of thing. These agents and officers have to be there with him, and there’s no substitute for that.”

The post For the Secret Service, a New Question: Who Will Protect Them From Trump? appeared first on New York Times.