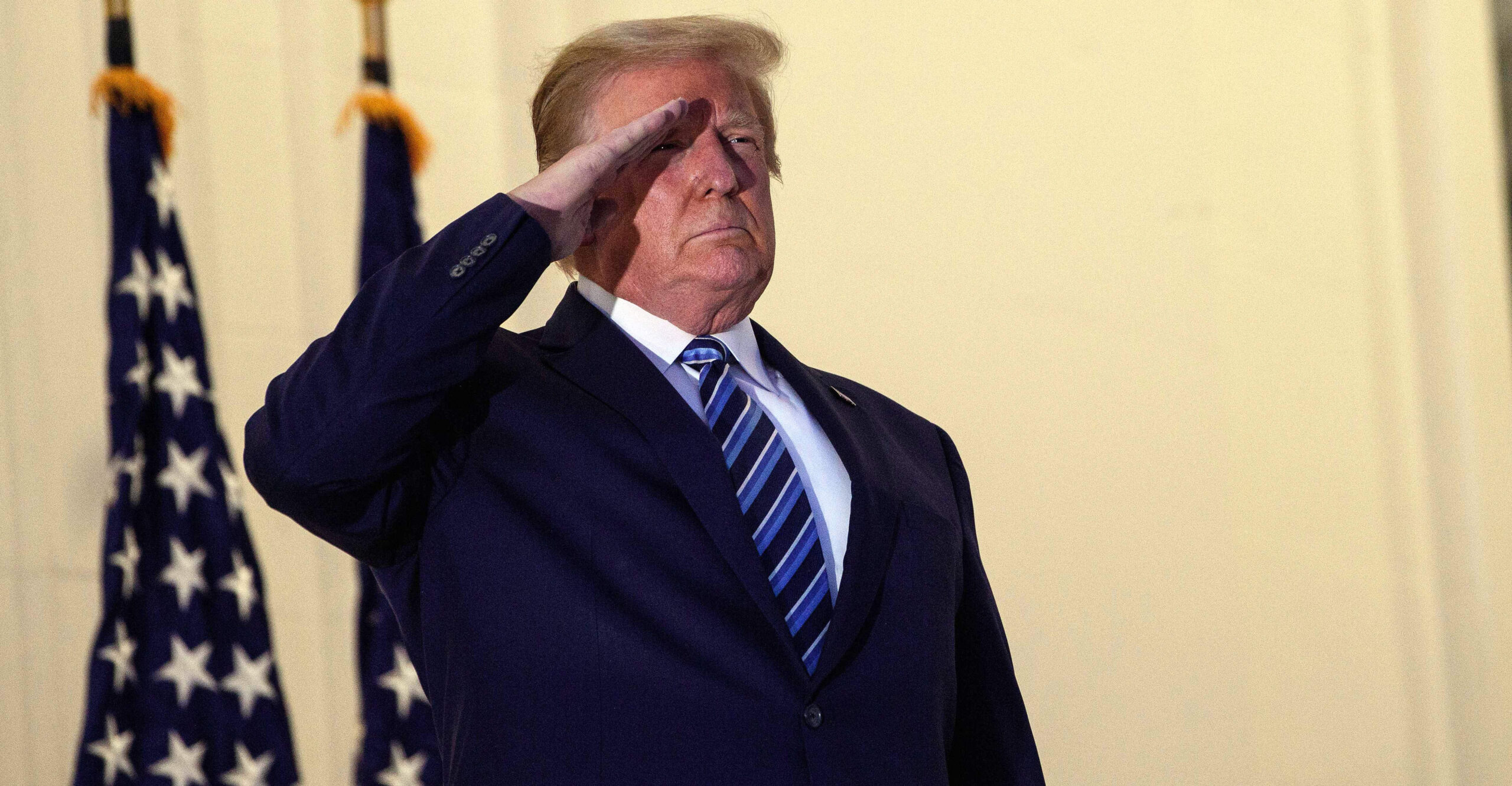 President Donald Trump returned to the White House on Monday evening after being discharged from a military hospital where he was treated for COVID-19 for three days. Within an hour, the president released a video in which he urged Americans not to let the disease “dominate your lives.”

After disembarking Marine One, the helicopter that flew him back, Trump climbed stairs to a White House balcony where he took off a mask, saluted as the aircraft lifted off, waved, and gave a thumbs-up.

The president had walked out of Walter Reed National Military Medical Center wearing a mask at 6:42 p.m., giving a thumbs-up to cameras outside the facility in Bethesda, Maryland.

As Trump strolled to the armored sport utility vehicle that took him to Marine One outside the hospital, a reporter shouted to ask whether he is a “super spreader” of the disease caused by the new coronavirus. After reaching the SUV, the president turned and gave another thumbs-up and fist pump.

The helicopter was wheels up at 6:46 p.m., according to the press pool report, and landed at the White House at 6:57.

Just before 8 p.m., the president tweeted out a new video from the White House, in which he thanked his caregivers at Walter Reed, touted advances in drugs and treatment, and urged Americans not to let COVID-19 “dominate your lives.”

As your leader, I had to do that. I knew there’s danger to it, but I had to do it. I stood out front. I led. Nobody that’s a leader would not do what I did. And I know there’s a risk, there’s a danger, but that’s OK. And now I’m better, and maybe I’m immune, I don’t know. But don’t let it dominate your lives. Get out there, be careful.

“And the vaccines are coming momentarily,” Trump added.

The helicopter ride from Walter Reed took about 10 minutes before touchdown on the South Lawn of the White House.

After getting out, Trump waved and walked up the South Portico steps, where he turned, buttoned his suit jacket, and gave a long salute. He said a few words, but the press pool reported that the words were inaudible.

The president announced in a tweet early Friday that he and first lady Melania Trump had tested positive for COVID-19, the disease that has killed more than 200,000 Americans since spreading around the world from Wuhan,  China.

>>> What’s the best way for America to reopen and return to business? The National Coronavirus Recovery Commission, a project of The Heritage Foundation, assembled America’s top thinkers to figure that out. So far, it has made more than 260 recommendations. Learn more here.

At 74 and somewhat overweight, Trump is in a high risk category. However, his symptoms reportedly were moderate.

“Feeling really good! Don’t be afraid of Covid. Don’t let it dominate your life,” Trump tweeted earlier Monday. “We have developed, under the Trump Administration, some really great drugs & knowledge. I feel better than I did 20 years ago!”

On Sunday, a masked Trump left the hospital briefly for a short motorcade in his SUV to wave to supporters gathered outside since Friday.

The White House said the president’s doctors advised him to check into the hospital “out of an abundance of caution.”

“The team and I agree that all our evaluations—and, most importantly, his clinical status—support the president’s safe return home, where he’ll be surrounded by world-class medical care 24/7,” Conley said.

Doctors reportedly put the president on eight different medications, including remdesivir, which is among the most common antiviral drugs given to COVID-19 patients; monoclonal, an antibody “cocktail” of several drugs; the steroid dexamethasone; famotidine, widely known by the brand name Pepcid; vitamin D; melatonin, a naturally occurring hormone with antioxidant, anti-inflammatory properties; and aspirin; and zinc.

“I am feeling good & will continue to rest at home. Thank you to medical staff & caretakers everywhere, & my continued prayers for those who are ill or have a family member impacted by the virus,” she wrote on Twitter.

Ken McIntyre contributed to this report.