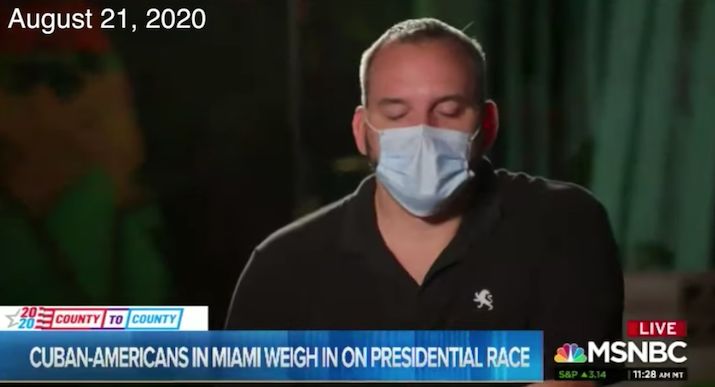 Did we really need yet another reminder of just how dishonest the media “town hall format” is? In this latest installment, the Free Beacon makes a nice catch about the intellectual honesty of NBC News. In their forum for Joe Biden last week, at least two of the participants had already declared their preference for the former VP over Donald Trump.

Granted, it might have been easy to miss those … had they not happened on NBC News’ own platforms. D’oh!

NBC News featured a pair of “undecided” voters during a network town hall earlier this week who had previously declared their support for Democratic nominee Joe Biden on the network’s sister channel, MSNBC.

Lawyer Peter Gonzalez and marketing executive Ismael Llano posed questions to Biden during a town hall on Monday, when he appeared before what the network described as an “audience of undecided Florida voters.”

Both Gonzalez and Llano, however, were featured in an MSNBC segment in August to explain why they support Biden. “If we get four more years of Trump, good luck, and good luck with the future attracting younger voters,” Gonzalez said as an MSNBC chyron noted he was “voting for Biden.” Llano was also identified as “voting for Biden” and offered praise for the former vice president.

On Monday, NBC’s Lester Holt said that Llano “voted for Hillary Clinton four years ago but has voted Republican in the past.” Gonzalez, whose voting history went unmentioned, asked Biden to ease his family’s concerns that the Democrat is beholden to “the radical left.”

Maybe NBC News personnel don’t watch MSNBC. That would certainly explain their confusion. And let’s face it, who could blame them? Do you watch MSNBC?

That potential explanation aside, this proves Marc Caputo correct:

NBC’s town hall with Joe Biden & “undecided voters” in Miami didn’t seem to have undecided voters. Nor was it much of a Miami town hall, which would have way more yelling & pointed questions. It was a TV show that doubled as a Biden infomercial. Can’t blame him for doing it

The only thing Caputo missed was intentionality. This looks as rigged as the quiz shows of the 1950s, with only Charles Van Doren and Herb Stempel missing from the festivities. Trump himself took note of the false pretenses used by NBC News to take a swipe at NBC parent Comcast in the middle of his tweet storm this morning, calling them “Concast”:

Don’t let this distract from the usual dishonesty of these “town halls,” too. The media outlets that stage these either carefully select which questions get asked, or they assign questions to audience members, who are carefully selected by the organizers to suit their own narrative needs. These exchanges are anything but spontaneous and representative.

This infomercial effort from NBC News is only notable for the extent to which they went to cook up this event. This reflects shamefully on them as a news organization, but it reminds us that they’ve largely abandoned journalism for narrative and advocacy. This is just the most recent and blatant example.