Five Quick Things: The Polls, or the Fundamentals? 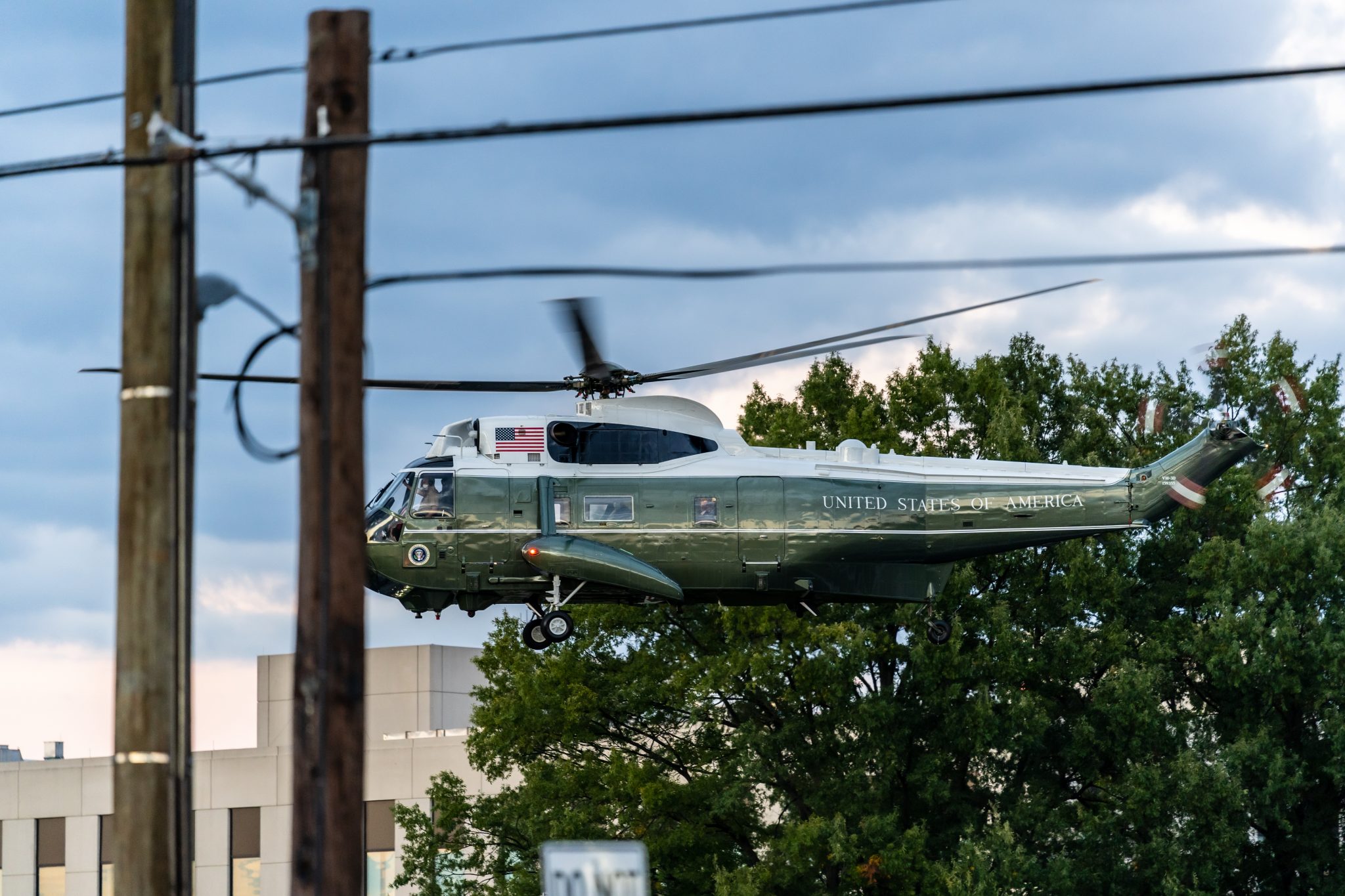 This week it’s all the rage among the legacy media types and even a few of the old-time conservative pundit class to screech about poll numbers and declare that President Trump’s campaign is as sick as he supposedly was with COVID-19 over the weekend.

And boy, they have the poll numbers to prove it, don’t they?

Why anybody would believe a national poll of registered, rather than likely, voters less than a month before a presidential election is beyond me.

NBC has a poll with Joe Biden up by 14 points. Not to be outdone, CNN says the margin is 16. They’re polling registered voters because they say this will be the highest-turnout election in American history and everybody’s coming out to vote.

Monday, former RedState editor Erick Erickson wrote that the poll numbers are sending Republican operatives he knows into a panic:

This is why, if you know where to look, panic is starting to set in with Republicans. The public polling now is reflecting internal Republican polling from last week. Multiple campaign strategists and pollsters from states as diverse as Arizona, Georgia, Pennsylvania, and even South Carolina are starting to see the bottom falling out.

Senior citizens, suburban women, and white men from up north are drifting to Biden. The President’s debate performance excited a portion of his base but alienated more. He has not grown his base nor done enough to offset it with Hispanic voters and black men.

We are less than thirty days from the election. The President is battling COVID-19 and unable to campaign. His best hope is that Mike Pence has a stellar debate performance and hits the campaign trail in lieu of the President.

This kind of talk seems to be everywhere.

But is all of this real? Here are five things to consider that might make you doubt those polls.

All of those terrible polling numbers showing Trump getting murdered by Biden? They were just as bad in 2016.

We don’t really need to go back through all of the double-digit leads Hillary Clinton had on Trump, and the alleged mathematical certainties of a Hillary win and so on. Everybody knows the pollsters blew it then.

Not really. Not fundamentally.

There were shy Trump voters in 2016 that pollsters couldn’t pick up. There are just as many now. Probably more — if anything the Left has been more oppressive and more fearsome in its attempts to shame and disparage Trump voters where it can. Deranged Democrats are recording themselves vandalizing Trump signs, some even on private property. Cars with Trump bumper stickers get keyed. People attack strangers for wearing MAGA hats.

What we found out in 2016 is those tactics don’t persuade people not to vote for Trump. Such tactics drive those votes underground, and they resurface in the secrecy of the voting booth. There is no penalty for straight-up lying to a pollster, at least not yet.

In 2016 it was Hillary Clinton calling those voters deplorables. This year it’s Antifa beating them up in the streets.

Do you not think Trump’s voters are even more shy than they were before?

Sure, maybe these polls are right. Of course, why anybody would believe a national poll of registered, rather than likely, voters less than a month before a presidential election is beyond me. Especially when the pollsters are defending such methodology as more reflective of the 2020 electorate. How in the hell do they know?

But if they weren’t right in 2016, and the electorate is pretty similar to what it was in 2016, why would you believe the polls at all?

You’re aware there has been a massive run on guns and ammunition this year, right? Do you think the people buying those guns are Biden voters? Biden has been one of the foremost gun-grabbers in American politics over the past half century. Why would people rush out to buy guns Biden wants to take away, and then vote for Biden to take them?

Then there is the massive departure of America’s urban middle class to the suburbs and the exurbs. Yes, there is the danger that those transplants, many of whom are vacating the deep blue states for the purple and red ones, might bring their politics with them.

But that isn’t, generally speaking, what has happened. Most expatriate Californians in Texas, for example, are Republicans. Some middle-class voters from places like New York might have been Democrats in the Big Apple simply because Republicans couldn’t win where they lived, but move them to Orlando and they might turn out to be set free politically. Look at voter registration in Florida so far this year; it’s a blowout for the GOP. More on that below.

And then there’s the “get woke, go broke” phenomenon. The NBA has just about bankrupted itself, driving away the bulk of its viewing audience with its disgusting BLM virtue-signaling. Monday night LeBron James, the league’s biggest star (and yes, we’ve just identified the NBA’s biggest problem), walked off the court with time left on the clock in a Finals game, and you barely even heard about it. Think about what the country’s reaction would have been if that had been Larry Bird, or Magic Johnson, or Dr. J, or Michael Jordan. Now? Nobody gives a damn. And the other ratings of major sports leagues like Major League Baseball and the NFL have taken a similar, though perhaps not quite as thorough, bath.

Then there’s the death of the motion picture industry, which is losing its outlets as major theater chains are throwing in the towel. That industry has been in swift decline for years; it’s moribund now. How much influence have Democrats counted on from Hollywood celebrities in moving their message through the years? All but gone today.

The public is clearly turning against the “woke” virtue-signaling of American corporate culture. As Breitbart said, politics is downstream from culture, but in the past year the Left’s destruction of so many of the institutions it controls has begun to result in the diminished influence of those destroyed institutions. Do you really think that gets reflected in a Joe Biden blowout victory?

The voter registration numbers in Florida fly hard in the face of those poll numbers. Four years ago there were 330,000 more registered Democrats than Republicans. Now that gap is 183,000. In Pennsylvania, the Democrats’ edge in registered voters has fallen off by just under 200,000, the majority of which has come this year. In North Carolina, Republican voter registration is up 3.5 percent, while Democrats have fallen off by more than 6 percent since the 2016 election.

It fails even the most basic test of logic to think that these swing-state voters are switching from Democrat to Republican just so they can cross the aisle again and elect Biden president.

Especially when the Trump campaign, undaunted by COVID-19, has engaged in a door-knocking campaign the likes of which few campaigns have ever put forth. The campaign’s standard is a million knocks a week, a staggering number, and they hit the 100 million mark early last month. The Biden campaign? Just went in the field. They’re scared of COVID. They’ve said so.

Oh, and those mail-in ballots you’re so afraid of? Not to say you have nothing to worry about, because mail-in balloting is clearly corruption of the process. But so far, in swing states like Ohio, Nevada, Michigan, and Wisconsin, the numbers on those mail-in ballots have things more or less at 50-50 by party registration. Nationally, Democrats have a sizable advantage, but who cares if they blow things out in Washington and California?

Biden has openly declared Trump and his campaign are “irresponsible” for holding campaign rallies with thousands of people in tow, while Biden has awkward, almost comic events forcing small numbers of select people to stand or sit in spread-out, spray-painted circles. Which one of these campaigns looks like they’ll be successful in getting their vote out?

4. What is Biden selling, anyway?

In the media age, there has never been a candidate who won a presidential election without a message that captured the public’s attention. Trump won in 2016 on Make America Great Again. Barack Obama sold Hope and Change. George W. Bush offered compassionate conservatism. Bill Clinton was a New Democrat. George H. W. Bush pitched a “kinder, gentler America.” Ronald Reagan asked if voters were better off after four years of Jimmy Carter in 1980, then asked the same question of his own presidency in 1984.

Joe Biden is selling … what? Wear your mask?

For a while he was selling riots; then he was blaming those on Trump. He was for a mask mandate, then he wasn’t, then he was. We covered all of this before in this space. Biden’s messaging, when he bothers to offer any at all — half the time he just decides not to campaign and calls a “lid” on any activity — is an abject mess. He won’t answer basic questions to fundamental issues like packing the Supreme Court or his son Hunter’s crooked dealings with foreign bad guys. He criticizes Trump’s COVID response and then offers a plan that is identical to what Trump has already done, much of which he criticized at the time.

Yes, there are polls showing Trump’s debate performance was a negative. There are also polls showing the opposite. Biden didn’t have a single sound bite from that debate he could use to any good effect; Trump stomped all over every single one. Was it obnoxious? Sure. So what? Biden interrupted Trump as well, and frankly he was a lot nastier. Trump never called him a clown or told him to shut up. And does anybody expect the remaining debates, assuming there are any, to go any better for Biden?

He’s a manifestly bad candidate with a manifestly vacant message. The closest thing to this that has won a presidential election in the past century would be Jimmy Carter in 1976, but Carter at least was seen as a good guy and a political outsider. Nobody thinks that of Biden. And Carter rode a Democrat post-Watergate wave. Trump’s approval rating is pretty similar to Obama’s in 2012 when the latter was reelected.

Where are the fundamentals to support a Biden victory?

Here’s perhaps the most important factor. Campaigns are few and far between that can win elections without being the side more fun to be on.

What’s fun about a COVID Karen candidate who won’t do real campaign events, who needs a teleprompter for softball TV interviews, who makes creepy and racist statements like the one a couple of days ago about how he was able to sequester at home because of some black woman stocking the grocery store shelves, or the one where he suggested he wanted to see a few pre-pubescent girls “dancing in about four years”?

What’s fun about a campaign that doesn’t even show up half the time?

Trump’s supporters are doing boat parades with hundreds or even thousands of vessels forming armadas on rivers and lakes. They’re loading up the internet with funny memes. They’re wearing out state legislators demanding they open up their local economies. They’re beating local school districts up to get high school football players back on the fields. They’re clearly the most engaged citizens in the country, and they’re gaining energy rather than losing it as the election gets closer.

What are Biden’s people doing?

Those rioters aren’t Biden’s people, you know. They’re nobody’s people. They’re not even Bernie Sanders’ people. What they want doesn’t exist in America’s legitimate political process. To the extent they’re for Biden it’s because they think they can overthrow him. Think it’s any fun to vote for a demented Alexander Kerensky?

But hey, those polls say what they say. If you want to believe them rather than what you see going on around the country, knock yourself out. We’ll know soon enough who’s right.