Portland: 90 percent of those arrested during protests/riots last month have had charges dropped 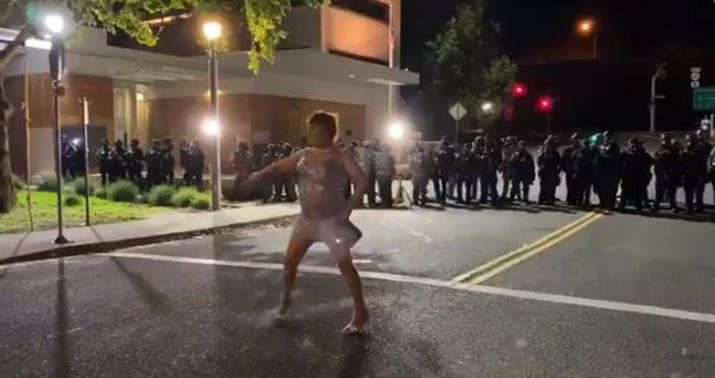 There was a brief pause in the nightly protests/riots taking place in Portland last month because wildfires had rendered the air hazardous. Even so, police made more than 200 arrests last month. But as expected, nearly all of those arrested have already had the charges against them dropped:

Officers with the Portland Police Bureau, as well as Oregon State Police, made 213 arrests in September, according to a KOIN 6 News database compiled from press releases and direct inquiries. That’s a decrease from August, which had a record 295 arrests…

As in August, interfering with a peace officer was the most common charge demonstrators were arrested on, followed by disorderly conduct and riot. All three charges are ones the Multnomah County District Attorney’s Office has decided to “presumptively decline to prosecute.” The policy is designed to “focus limited prosecution resources on violent crimes that include property damage, assaultive behavior and actions that create a risk of injury or property destruction during a mass demonstration,” according to the DA’s office.

Indeed, most suspects have had their charges dropped or dismissed, some as soon as the day after their arrest. As of October 5, charges had been dropped in around 90% of the cases stemming from September’s protest activity.

About 10 percent of those arrested last month were people who had previously been arrested. Clearly word has gotten around that even if you’re arrested at one of these nightly protests/riots nothing will happen to you. And that’s one reason why the protests in Portland haven’t stopped.

Last night, police once again declared an unlawful assembly after the group marched on the ICE center:

After first gathering in Elizabeth Caruthers Park on South Moody Avenue, the group marched to the ICE building on South Macadam Avenue. Within minutes of arriving, protesters began blocking traffic on South Bancroft Street and some were seen shining lights into the eyes of the Federal Protection Officers who were standing outside the building.

The Portland Police Bureau says just before 11 p.m., someone in the group threw some sort of incendiary device on the roof. Portland police attempted to clear the crowd as several members of the group threw rocks at officers. As the criminal activity continued, the federal officers emerged from the building’s entrance to assist in dispersing the crowd.

Camillo Massagi reads Willem van Spronsen’s manifesto at the Portland antifa protest. Van Sprossen is the armed antifa militant who firebombed the Tacoma @ICEgov facility & got himself shot dead in the process. pic.twitter.com/2YzRpO6iyA

Feds didn’t come out after their 2min warning, protestors moved up and are taunting them to come out pic.twitter.com/ZiG6zGrJv7

Protestors retreated in formation, using umbrellas to shield themselves from impact munitions pic.twitter.com/aBNWtMmbzD

After a pause in the action, the protesters returned to try again:

Four arrests were made. All of the charges will be dropped.

Protestors resist by sitting in the street, arrested by police pic.twitter.com/GGmCXbzBMi

Not everyone is thrilled with the late night protests (NSFW language):

A resident does not approve of the protests pic.twitter.com/V7Sum8erHt

Apparently a live-streamer was attacked last night. Why? Because he was holding a camera:

Damnit I was going to bed. Clipped from @after_theaction – streamer got attacked on his live stream. #Portlandprotests pic.twitter.com/o47ESdK0ND

Another angle on the assault:

3rd person point of view of streamer getting assaulted by some guy who didn’t like his camera pic.twitter.com/lfVlfuCE6T

Maybe at some point the DA will decide enough is enough and he’ll actually prosecute the people arrested by police, but apparently 121 days of this isn’t enough to convince him yet.