Steve Schmidt: That fly that landed on Pence’s head historically has been the mark of the Beast 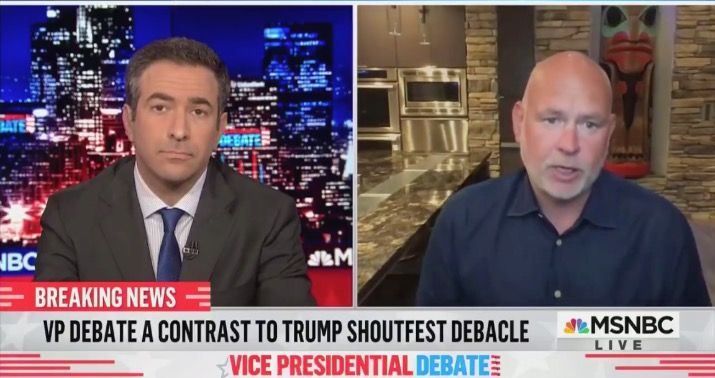 Ninety-five percent of the time, “Trump Derangement Syndrome” is just something MAGA diehards say to wave away valid criticism of the president that they don’t want to hear.

But then there’s that other five percent. When it happens, you know it instantly. And it’s magical.

I think this is deadpan humor by Schmidt, a member of the Lincoln Project and one of the most vociferous Never Trumpers in media. But it could be a half-kidding product of circumstance — it was late, he hates Trump, he was addressing a cable audience that hates Trump, and he and Ari Melber were trying to fill airtime. Maybe he’d had a glass or two of wine during the debate and a thought popped into his head about Satan and he decided to just run with it. “Explore the studio space,” if you will.

Steve Schmidt says a fly landing on Mike Pence during the debate is “the mark of the devil” pic.twitter.com/tXe5oPSilI

By Election Day, MSNBC will be doing incantations on the air to try to rid America of evil. It’s going to be a rough final month on cable and Twitter.

My banal take on last night is that if it’s not immediately apparent afterward who won a debate — or rather, who lost — then the debate didn’t matter. VP debates in particular are so low-stakes that it’s hard to imagine what could happen onstage to influence a voter’s choice between the two presidential nominees. If Pence had theatrically coughed in Harris’s direction to mock her for worrying about COVID, that might have done it. Or if Harris had followed Trump’s debate strategy of interrupting her opponent once every six seconds, that may have alienated people. (Polls this week suggest that Trump’s boorish performance at the first debate really did cost him.) As it is, a CNN poll this morning found that viewers thought Harris won, 59/38, but the same group had predicted she would win beforehand by a margin of 61/36. Essentially people tuned in with certain expectations and/or rooting interests and nothing happened onstage to shake them. A Frank Luntz focus group found Harris’s constant disdainful mugging for the camera off-putting, with Pence coming off a bit better, but the gender split in the CNN poll is noteworthy: Women who watched overwhelmingly thought Harris won, 69/30. It sounds like Harris didn’t do Biden any damage among the demographic he’s counting on the most. To the contrary.

The most noteworthy thing to happen was arguably Pence showing up with a red eye. That was alarming because conjunctivitis, a.k.a. “pink eye,” does happen sometimes in people infected with coronavirus. It’s rare, maybe something on the order of one percent or even slightly less among nonsevere cases. (It may be more common in kids who are infected.) But it’s even rarer among adults who don’t have COVID, which makes for a curious coincidence that the VP would have a red eye amidst a major outbreak at the White House. It led to this bit of math-heavy speculation:

Earlier tonight I speculated that Pence’s unilateral conjunctivitis was a troubling sign that he might have COVID.

Is that a reasonable inference to draw? We can use Bayes’ rule and a bit of Fermi estimation to figure it out. pic.twitter.com/p9RnyUmj76

You can plug in your own numbers of course. But the bottom line is that because (1) Pence has been exposed to COVID recently, (2) unilateral conjunctivitis is rare in healthy adults and (3) it is less rare in adults with COVID, the observation substantially increases our concern. pic.twitter.com/hdhkNOYP9F

Is believing Pence might have COVID itself an example of TDS? There are problems with the theory. First, at least one eye doctor watching last night thought he recognized something more benign.

Two: Pence and his wife tested negative before the debate. One would think that if he were infected and at the stage where he’s exhibiting visible symptoms of the disease, he’d be testing positive already. Exit question for doctors: Am I right in that assumption? Could it be that Pence has the virus and there’s enough of it in his system to make him infectious *and* symptomatic with a red eye, but that he’d still be showing up negative on PCR tests?