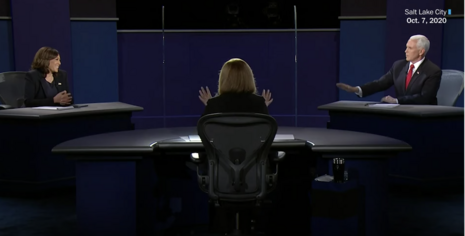 Well, when your female debater wasn’t doing too hot against her male challenger, there’s always one tactic you have in your arsenal that you can use to nullify the whole event; you can cry “SEXISM!”

After the only Vice Presidential Debate for the 2020 election happened on October 7, social media’s most savvy blue-checkmarked commentators dissected and analyzed VP Mike Pence’s performance and came up with one interesting inference as to why he performed so well: it’s because he used cheap “sexist” bullying, like “mansplaining” on his opponent, Senator Kamala Harris (D-CA), and even the moderator, USA Today Washington Bureau chief Susan Page.

Ha! It sure sounds like Vice President Mike won that debate handily and lefties were making excuses.

Media lefties, including journos and entertainment industry folks, began tweeting that Pence’s male privilege altered the dynamic in the debate. Feminist author and man-hater extraordinaire Jill Filipovic made the vapid complaint in the middle of the debate.

Filipovic tweeted, “Every woman knows that condescending sexist man who repeatedly calls you by your name as a way to be disdainful and patronizing when he’s talking to you.” Um, OK. Is Mike Pence that man? According to Filipovic, yes. She added, “I don’t know what the term for that is but it is A Thing and Mike Pence is doing it to Susan Page.”

Later she tweeted, “Mike Pence does not respect women. He does not listen to them. He talks over them. Enough.”

Thanks, Jill, for the sensible take. Just kidding, Filipovic was so delusional and so anti-men that she has tweeted her desire for women to “divorce” their Republican husbands in revenge for the confirmation of SCOTUS Justice Kavanaugh.

Apparently, the liberal media echo chamber put it out there that “mansplaining” would be the big buzzword of the debate. As Daily Wire‘s Matt Walsh pointed out, S. E. Cupp, Dan Rather, George Stephanopoulos, and Cathy Yan all used the word to bash Pence.

Law & Order producer and playwright Warren Leight defended the ladies’ honor by checking Mike Pence’s “white privilege.” Tweeting: “We all saw when a woman moderator told Pence his time was up, he very calmly ignored her. That was white male privilege at the end of EVERY response.”

Or it was just Mike Pence trying to finish his point and Kamala had to be told to stop too. Give us a break.

Will & Grace actress Debra Messing loved this asinine assessment so much that she quote-tweeted it with the caption, “1000%.”

New York Magazine columnist Mark Harris mentioned his “takeaway” from the event. Writing: “One takeaway from tonight’s debate will be how many times a woman of color, always smiling pleasantly, has to tell a white man, ‘I’m speaking,’ in order to STILL get less time than he gets. It is nauseating.”

Though more accurately, the Senator was smiling condescendingly, and seemed a bit more rude than Pence. But with this identity politics, he’s the white man, so he’s the only one that can look bad, right? In addition, Pence only spoke three more seconds than Harris according to CNN. That’s some major white male privilege.

Star Wars’ Mark Hamill claimed that Pence employed sexist tactics, as well. The actor tweeted, “He consistently went over his allotted time, ignored questions he didn’t like while asking questions of his own, condescendingly ‘Pencesplained’ so a woman could understand, tried to defend the indefensible & still, a fly got all the headlines!”