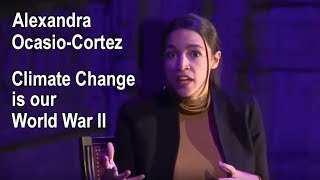 Alexandria Ocasio-Cortez’s initials AOC is a new Acronym sweeping the world. For most observers of social change in America, she hardly needs any introduction. But for those of you who might not have noticed her, she is one of the most remarkable young leaders on today’s political scene:

She started her campaign while waitressing and tending bar at a NY taqueria, operating out a paper grocery bag hidden behind the bar. She canvased with dogged resolve between shifts– knocking on doors in her NY District in the east Bronx and north-central Queens. Shockingly she went on to defeat a ten-term incumbent Congressman, ‘in one of the biggest upset victories in the 2018 midterm election primaries’, becoming ‘the youngest woman ever to serve in Congress.’

Along with her agenda of great social equality and raising taxes on the rich, she has called for more environmental hardliners in Congress, saying climate change is biggest national security threat for the USA and biggest threat to worldwide civilization.
————————–

Humanity is on a collision course with Nature. A damaged Nature will survive. We may not. We must change course to avert an ecological disaster.’ Twenty-five years ago, the Union of Concerned Scientists in Washington, D.C. along with the majority of then-living Nobel laureates, and some 1,700 scientists, drafted and signed the first World Scientists’ Warning to Humanity.

On its 25th anniversary a group of scientists looked back at that first warning to evaluate humanity’s response. What they found was most distressing. This group formed the Alliance of World Scientists. Their study, entitled World Scientists’ Warning to Humanity: A Second Notice was published in the prestigious journal BioScience, available at:
https://academic.oup.com/bioscience/article/67/12/1026/4605229