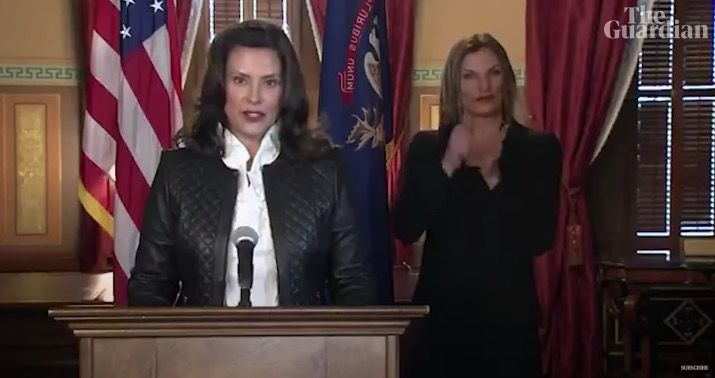 Although Trump’s name appears nowhere in the FBI affidavit, there’s no way Democrats weren’t going to make this a story about him. Especially with today’s news coming so soon after his “stand back and stand by” advice to the Proud Boys at the debate with Biden. Did he mean that as a wink-wink incitement to violence? “Somebody’s got to do something about Antifa and the left,” he said in the same breath, which sure sounds like incitement. But then the next day, after the uproar, he tried to clean it up by claiming that he didn’t know who the Proud Boys are and that “they have to stand down and let law enforcement do their work.”

Who knows what he truly intends at any given moment when he speaks. What’s clear is that the Proud Boys themselves took encouragement from it. In a way today’s news of the plot against Whitmer is a replay of the infamous episode in which the left blamed Sarah Palin for the shooting of Gabby Giffords because her Super PAC put out a campaign map during the 2010 midterms “targeting” certain districts with a crosshairs symbol. That was standard campaign rhetoric which the left demagogued in order to scapegoat Palin for the attack; it would be like blaming Trump for what the Proud Boys do because he’s prone to describing political conflict as “fights.” (“Take the fight to the left!”) The important difference with Trump, though, is that he doesn’t always speak metaphorically about violence. He hinted at the possibility of riots if he were denied the GOP nomination in 2016; he half-joked at the time that he’d pay the legal fees of anyone who punched a protester at one of his rallies; as president he ribbed an audience of cops that they shouldn’t be so gentle with suspects when putting them in the squad car.

He never full-throatedly endorses violence against his enemies but there’s always a smirk-and-a-wink vibe that he understands why someone he dislikes might deserve to be treated roughly. Ken “Popehat” White predicted today that when Trump is inevitably asked about the plot against Whitmer, he’ll say something like, “well, a lot of people are angry, the shutdowns are unfair.” Stay tuned.

Did the militia nuts take encouragement from him the way the Proud Boys have? This tweet from April is getting attention today.

He sent that a month after the lockdowns began, at a moment when he was beginning to push aggressively for states to reopen for business. Whitmer was one of the strictest governors in the country in keeping businesses closed; anti-lockdown protesters, some of them carrying guns and comparing her to a Nazi, rallied at the state capitol in protest of the measures two days before Trump published his tweet. That was the context for his cry for “liberation.” Biden was asked about that tweet today after the news of the militia plot was announced and naturally took the lay-up:

“The words he utters matters,” Biden said. Asked if he thought Trump’s LIBERATE MICHIGAN tweet encouraged militias like this, he said “yes I do.”

“Why won’t the president just say ‘stop. Stop, stop, stop.’ And if we will pursue you if you don’t.”

There’s no mention of the tweet in today’s affidavit. Whether any of the conspirators saw it, heard of it, or took encouragement from it in plotting to kidnap and murder Whitmer will remain unknown unless they talk to the FBI. But “liberating Michigan” from Whitmer’s alleged lockdown tyranny is precisely what they wanted to do, per the affidavit, which makes for hair-raising reading. These guys weren’t sitting around drinking beers and playing video games, chatting idly about how much fun it’d be to kidnap the governor. They were surveilling her vacation home and trying to figure out how to make IEDs. They first started talking about targeting her in early June and were still talking about it as of a week ago. Last Friday one member of the plot bought an 800,000-volt taser to use in the operation. Allegedly they had planned to meet with the FBI’s informant yesterday to “make a payment on explosives and exchange tactical gear.” At one point they considered having someone go to her vacation home while she was there and, if she happened to answer the door, to just shoot her point-blank.

Whether any of these cretins considered the president some sort of ideological ally or part of the same corrupt establishment that needed to be violently overthrown is unclear. But 26 days out from an election, Whitmer and Biden are going to pin them to Trump’s chest and hope that that finishes him off in Michigan on Nov. 3. Here she is blaming him, followed by Jason Miller chastising her for being so hateful.

Trump campaign official Jason Miller is on Fox News attacking Gretchen Whitmer, the victim of a kidnapping plot: “If we want to talk about hatred, then Gov. Whitmer, go look in the mirror — the fact that she wakes up everyday with such hatred in her heart for President Trump.” pic.twitter.com/sMXv7mgBfa