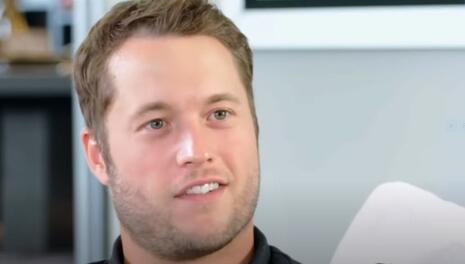 Detroit Lions quarterback Matthew Stafford has written his way onto sports’ unofficial all-white privilege team. In the post, “We Can’t Just Stick To Football” appearing on The Players Tribune blog, Stafford says police brutality, white privilege and racism are real and he should know because he grew up in a Texas town that was one of the most privileged places in the country.

Stafford says he loves football, but there are things way more important than that going on right now. Like taking a day off practice Aug. 23 to pout after alleged sex offender Jacob Blake was shot by police while resisting arrest in Wisconsin.

“Yes, this NFL season just kicked off, and nobody is more excited about that than me. But we can’t just move on from the issue of racial injustice and use sports as a distraction.”

Stafford says it’s time that we all come together as a country and admit “what we know is real.”

Taking that day off from practice in August was his proudest day as a Detroit Lion according to Stafford, who has a losing win-loss record as a pro quarterback. He knows some people don’t accept the social justice protests in sports, and he insists they are not politically motivated.

White privilege and systemic racism are “just the reality of this country, and it’s O.K. to talk about it. Situations that I take for granted are different for my black teammates, and I am learning just how deep that goes every single day,” Stafford continues to virtue signal.

Stafford says he’s not trying to lecture anybody. “I grew up in Highland Park, Texas, which is probably one of the most privileged places in the country. It’s a place that I still love very much, but it’s a bubble. That’s just a fact. I was not exposed to a lot of diversity or different ideas growing up. I was not educated on these issues, and I probably said a bunch of stupid things when I was young that I regret. But a big part of life is about looking inside yourself and trying to evolve as a person.”

When hearing his teammates break down crying over their stories of confrontations with police officers, Stafford says he can’t just sit there and be silent. He and his football brothers have each others’ backs when they’re in pain and he wishes we could do this as a country:

“There are still people, as sad as it is to say, who are simply not listening.

“After we canceled our (Aug. 23) practice, I received text messages that made me realize just how far we have to go in this conversation, and how people just assume I feel a certain way about all of this.”

Some people told him they were sorry he had to miss practice or to have to deal with protests:

“The fact that anyone would feel sorry for me, or be thinking about a football practice at a time like that, really speaks volumes. There are still people in this country who just want sports to be a distraction, and that’s their right. But I beg to differ.”

Stafford laments the urban blight of Detroit, racial inequality and schools without Wi-Fi and says, “Maybe you want to pretend it doesn’t exist, because you don’t see it with your own eyes. Maybe you just want us to ‘shut up and play football.’ “

The Lions quarterback says he probably can’t change your mind, but more than anything he wants you to listen, which is a big theme of other white athletes (Kyle Korver, Meyers Leonard) who’ve come out of the privileged closet.