‘Speak Up’ – Sesame Street indoctrinates the next generation of political activists 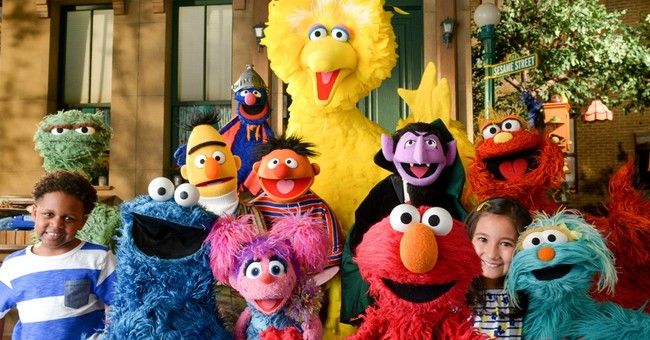 The latest effort by a public television show to turn very young children into political activists has been announced. Beginning October 15, a half-hour episode of Sesame Street will air with the goal of teaching children about racism in America.

Sesame Street has certainly changed from its original mission on-air. The show began as an educational tool for pre-school children. Basic school subjects like math and reading and science were incorporated into little skits. Silly and fun characters were introduced to the children. Those characters have been beloved by children around the world for decades. The PBS show soon evolved into more, though. Instead of sticking with a very important educational service of helping to prepare little ones for their school years, the show became a liberal voice in the culture wars. Now the focus is on emotions and social issues. It’s never too early to turn your 3-year-old into a social justice warrior, amirite?

Sesame Workshop — the nonprofit, educational organization behind “Sesame Street” — will later this month air the half-hour anti-racist special “The Power of We” and hopes families will watch together.

The special defines racism for younger viewers and shows how it can be hurtful. It urges children who encounter racism or hear someone else be the victim of it to call it out. “When you see something that’s wrong, speak up and say, ‘That’s wrong’ and tell an adult,” 6-year-old Gabrielle the Muppet advises.

The special, composed of little skits and songs in a Zoom-like format, will stream on HBO Max and PBS Kids and air on PBS stations beginning Oct. 15.

Two examples are given, one skit and one song.

In one animated skit, a Black Muppet is told by a white Muppet that he can’t dress up like a superhero because they’re only white. Though hurt, the Black Muppet nevertheless refuses to stop playing superheroes, saying they can come in all colors. The white Muppet soon apologizes. “Racism hurts and it’s wrong,” is the message.

In the song “How Do You Know?” racism is dealt with head-on. “Hey, Elmo, how would you feel if I said, ‘I don’t like you ‘cause I don’t like the color red?’” sings Tamir, a Black, 8-year-old Muppet. Elmo responds: ”Elmo wouldn’t care what you said ‘cause Elmo is proud, proud to be red!” It concludes with the lines: “Speak up. Say something. Don’t give in.”

So, two things here – not to nitpick but not all superheroes today are White. Black Panther was a huge award-winning box office hit. Luke Cage was a Netflix success. There is John Stewart from the Green Lantern series and Storm in Marvel Comics. Vixen is a Black female character in the DC Comics world. The point is that Black superheroes exist and are both male and female. By Sesame Street using the example, probably because the writers think the kiddos will pay attention to a skit about superheroes, it doesn’t ring true. Why conjure up an exaggerated hypothetical? The second point is telling children to “say something”. Does that include speaking up to adults and people in authority? That sounds like it wouldn’t work out well for children. Plus, it sounds as though children are being asked to be tattletales. Why put children in these positions?

Sesame Street was a groundbreaking show in its beginning. Yes, PBS is liberal but at one time the network was able to keep the kids out of it. The hyper-politicization of children today is just wrong. It’s indoctrination, not education. In the case of the topic of racism, the premise of liberals is that America is a racist country. This is offensive to a large part of the American population. Just in my own lifetime, race relations in America have dramatically changed. There are no more “Whites only” signs at water fountains or on front doors of business establishments. American voters elected Barack Obama twice to be president. There is a bi-racial woman running on the presidential ticket this year. Are we a perfect nation? No. But we’re the best in the world. Racism does not only go one way and that is rarely acknowledged.

Current and former cast members will participate in this episode. Celebrity guests include Yara Shahidi, the star of “grown-ish;” “Hamilton” star Christopher Jackson; and Grammy-nominated singer Andra Day. Viewers will receive tips on organizing their communities. And, the puppets will virtue-signal by wearing masks. It will end with a slogan – “Listen. Act. Unite.” I’m surprised they don’t take the time to teach kids how to register to vote. I’m kidding. Kinda.

The children are being called “upstanders”. Parents will be given online resources to encourage discussions about race. These resources include “downloadable pictures to color and a certificate with a place to put the name of an upstander.” Your preschooler can become a certified upstander. Sesame Street celebrates its 51st anniversary this year. HBO Max and PBS Kids will air the special.