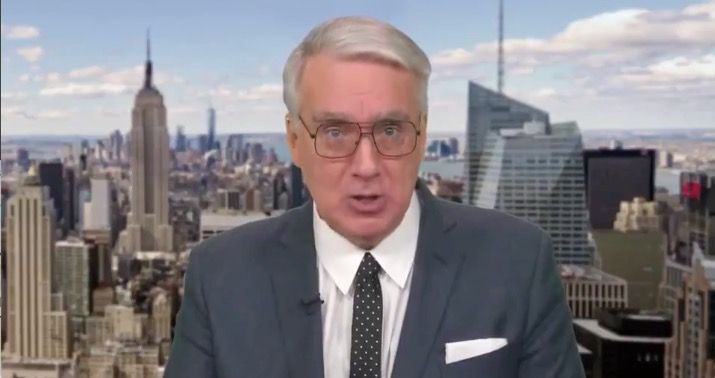 He announced a few days ago that he was leaving ESPN in order to do political rants on YouTube because, I kid you not, he thinks American cable news isn’t sufficiently anti-Trump to meet this moment.

Although, really, in the context of this wretched year, his return is best understood as the latest in a series of plagues visited upon the country.

Yesterday I would have told you that each of us will age a thousand years between now and November 3. Now I see it’ll be more like two thousand.

Remove ACB fr society. @KeithOlberman in YouTube rant: “Trump can be and must be expunged….His enablers…the Mike Lee’s, the William Barr’s and the Sean Hannity’s and the Mike Pence’s…and the Amy Coney Barrett’s must be prosecuted and convicted and removed from our society” pic.twitter.com/jC0AgOhAMU

Is there any room for negotiation on this? What if we agreed to banish Ted Cruz, Lindsey Graham, Josh Hawley, and Tom Cotton in exchange for keeping Barrett around?

If we can’t swing that deal, let’s go ahead and banish those four anyway and then try to reach an accommodation on Barrett.

What he thinks she may have done to warrant prosecution escapes me and I’m too lazy to watch his full-length rant about it. Presumably it has to do with her participation in the suspected superspreader event at the White House two weeks ago. Admittedly, it was not a good look for our next justice to be gladhanding the throng of (mostly) far less respectable characters around her sans mask and social-distancing. (Right, I know, she was probably immune because she’d had COVID before, but still. Set an example.) But even a mask nag like me considers banishment from society a bit steep penalty-wise for bad pandemic practices.

A year in the pen should be punishment enough. Maybe Olby could talk me into two.

Seriously, though: Can you imagine what political commentary will sound like the week before the election when this is what it sounds like now? What unexplored depths of mania will be plumbed as our country’s garbage punditocracy spins itself up into a tornado of anxiety, egged on the whole way by the commander-in-chief? By November 3rd Olbermann will be reading from the Necronomicon to try to send Trump back to the dimension he came from.

Let’s end the week on a light note, with this surreal clip that I wanted to post elsewhere but never got around to. How this insane premise landed an A-list star in the lead role, I can’t imagine. But I actually might risk death from COVID to see this in a theater.