Looking beyond the polls, there continue to be signs that Trump will win 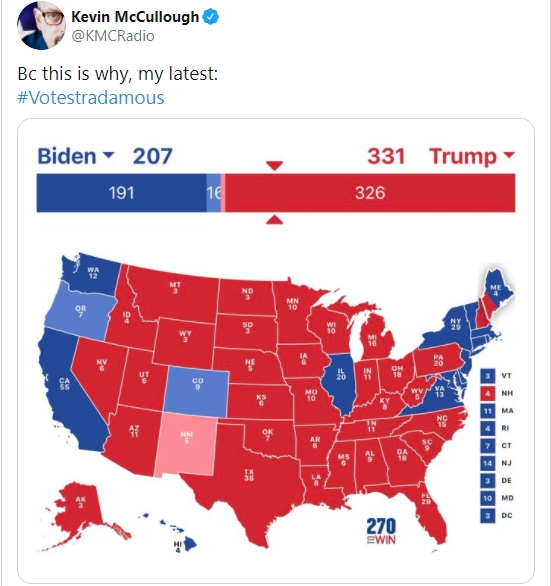 There’s a delicate balance between hope and false hope. If we have hope, it’s incredible what we can do. If we have false hope, as the Democrats did in 2016, when those hopes are dashed, we risk going insane, as the Democrats have done every minute since November 8, 2016. Currently, the big polls show Biden cruising to victory, with Trump staggering after. However, Don Surber, who predicted Trump’s victory last time around, predicts Trump will win as many as 37 states! I thought I’d share with you some of his thoughts.

First, the mere fact that Surber got it right the last time around is not the reason I rely on him. After all, it was a binary election: Either Trump or Hillary would win. That Surber picked correctly meant he was willing to look beyond the polls, but it doesn’t make him a guru.

No, what makes Surber a guru is that he tends to be correct about so many things when it comes to understanding how Trump operates and seeing through the media’s machinations. I read Surber’s blog six days a week (he doesn’t blog on Sundays) with almost religious discipline. A former journalist himself (back in the day when it meant reporting the facts, not shaping the narrative), Surber is an excellent writer and a superb analyst. I always learn from him

On Saturday, Surber again predicted that Trump would win. But typically, Surber didn’t just say, “I don’t believe the polls.” Instead, he drilled down into some fascinating details.

The first point Surber made is that the Democrats are suddenly working hard in Pennsylvania. Or, as a Yahoo report said, “In campaign’s final stretch, Democrats claw their way back in Pennsylvania” – a state in which, according to Real Clear Politics, Biden’s lead averages 7.1%. Surber asked the right question: “If Democrats are that far ahead in Pennsylvania, why is the media saying he is clawing back?”

It’s significant for Surber that the Democrats have set up a campaign office in Erie County, a small county in northeastern Pennsylvania. Admittedly, Trump won there in 2016, but that doesn’t necessarily mean that Biden should go to war in Erie. It turns out, though, that Erie has a peculiar predictive property, said Surber:

Democrats sweating Erie is an indication that gee, maybe, that 7-point lead is as believable as an email from a Nigerian prince.

538 gives Biden less than a 53% chance of winning Pennsylvania. That also says a lot about that 7-point lead.

Surber also picked up on a point that Ace, writing at Ace of Spades, made:

If there were a lot of Trump defectors, the media would be profiling them and lionizing them and promoting them 24-7. But I haven’t seen a single story about Trump 2016-Biden 2020 defectors.

True. Instead, as Surber said,

Meanwhile, Johnny Rotten has gone from “don’t you dare vote for Donald Trump” to “Of course I’m voting for Trump.”

Maybe Surber is whistling in the dark, trying to scare away the inevitable collapse of the Trump campaign, and maybe I’m just whistling along with him, trying to cheer myself up. Nevertheless, because Surber has repeatedly been prescient about political events over the past five years, I’ve got faith in him. That’s why I have what I hope is real hope, not false hope when Surber makes this prediction:

The number that matters is 270. That is the number of votes in the Electoral College needed to win the election. That 46% gave him 304 Electoral College votes in 2016, even after a couple of them defected. He carried 30 states that year. He will carry 37 this year. He won’t get a landslide, which will burn them even more because once again they will come so close but win no cigar.

I highly recommend that you read Surber’s entire post, which you’ll find here, and then bookmark his blog. Trust me, you’ll be glad you did.

Also, here’s another “cheer-up” bonus from Kevin McCullough, which is another piece of information on which Surber relies: