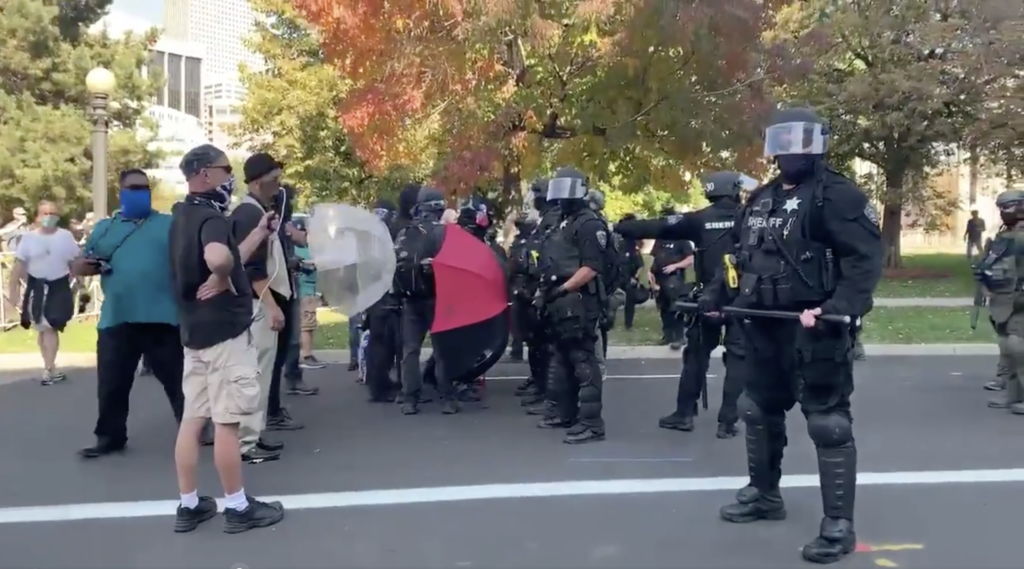 One person is dead after a shooting in downtown Denver on Saturday during a clash between “Black Lives Matter-Antifa Soup Drive” led by The Denver Communists and “Patriot Rally” protesters who think it’s “time to take our country back.”

ALERT : Officers are investigating a shooting that occurred in the Courtyard by the Art Museum. 1 victim transported to the hospital their condition is unknown, 1 suspect in custody . pic.twitter.com/1F6NuVlv0F

The shooting, which was caught on video, occurred in between the Denver Public Library and the Denver Art Museum after a verbal altercation broke out between some of the protestors while the crowd began to disperse.

Here’s the scene outside the Denver library as police investigate a shooting following the rally #9News pic.twitter.com/F7S0RVMQCv

The suspect, who was was arrested immediately following the incident, is “a private security guard with no affiliation with Antifa.” The victim has yet to be identified but appears to be associated with the conservative demonstrators, according to Post Millennial editor Ian Miles Cheong.

According to 9NEWS, “the private security guard in custody was contracted through Pinkerton by 9NEWS” because “it has been the practice of 9NEWS for a number of months to contract private security to accompany staff at protests.” A 9NEWS producer was also arrested at the scene but later released.

The Denver Police Department recovered two guns and a canister of mace at the scene. DPD Chief Joe Montoya says that the shooting is still under investigation as a homicide and that it is currently unclear how the full situation unraveled.

Update: Further investigation has determined the suspect is a private security guard with no affiliation with Antifa. Additional information will be released as it becomes available.

After the shooting, a protestor can be seen walking away from the scene celebrating the man’s death.

More Antifa/BLM celebrating the killing of a Trump Supporter.

“right in the fucking dome” pic.twitter.com/vI4MZCbIcU

Antifa militants are now harassing police in Denver who are trying to control the situation where a man was just shot. pic.twitter.com/0fPRJ3cXyF

The incident occurred following the clash of patriot and Antifa protestors in Civic Center Park, where both groups gathered to demonstrate their support or opposition for the police, freedom, and the United States.

A line of police officers kneel down to put on gas masks, perhaps foreshadowing what’s to come. The officers are lined up in front of a line of far-left groups organized by the Denver communists #9News pic.twitter.com/WZV0nnGXab

The patriot protest was organized first, and a counter-protest was quickly staged by the BLM-Antifa group.

“We feel it is our responsibility to vocally oppose fascists every time the try to assemble. And we hope you feel the same way! And what are our options? To cede our streets to them?” Denver Communists wrote on their Facebook page.

While the Patriot protestors reportedly “gathered in the park’s amphitheater and occasionally chanted patriotic songs and held up banners,” the Antifa counter-protesters “held up flags and signs railing against Nazis and white supremacists as they gathered in the middle of the park.:

Police were sent to the area in anticipation of the protests and attempted to keep the groups separated but deployed pepper balls after the Antifa crowd attempted to breach the barriers.

“One protestor burned a thin-blue-line flag in front of the officers,” the Denver Post reports.

Dozens of militia group members arrive for the “patriot muster” in Denver. Many are carrying shields and wearing helmets #9News pic.twitter.com/9dsO9wQ40c

There are a lot of police officers out today separating the two groups. There are also fences all around civic center park keeping the two groups apart. The far-left group here right now is shouting “the only good cop is a dead cop” #9News pic.twitter.com/d8lBIB4YZS

Previously, the DPD announced that they “respect the right to peacefully assemble” planned by both groups.

“Those who participate in protests, demonstrations, marches, or other gatherings, as protected by the First Amendment, are reminded to do so in a lawful manner. Individuals who choose to act outside of local, state, and federal law, will be subject to citation or arrest,” the statement read.