So the President is no longer contagious? 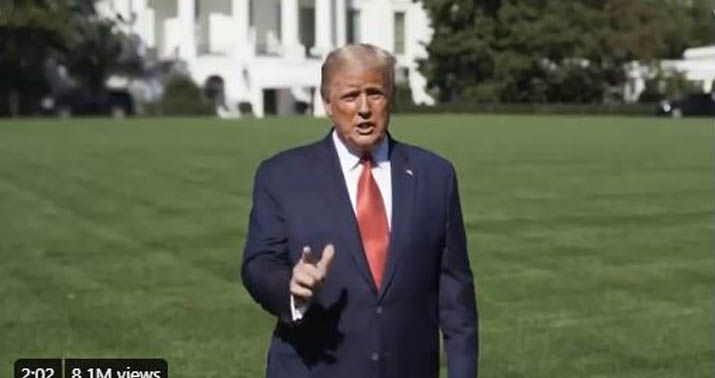 As soon as the White House announced that President Trump had recovered from COVID-19 and would be returning to the campaign trail, his detractors commenced wailing about how he was putting everyone at risk because he could still be contagious. For those of us who aren’t medical experts (and apparently for at least some who claim to be) that probably sounded like a valid concern. After all, even if Trump is out of the woods in terms of his own health, you wouldn’t want him spurring any new infections, right? But we would first need to know if and when he is no longer a potential carrier of the virus.

Trump’s physician, Sean Conley, sought to put the question to rest yesterday. In a memo released by the White House on Saturday, Conley stated that the President “is no longer considered a transmission risk to others.” That sounds like more great news, but as has been the pattern all too often with Conley, he frustratingly left out several details that could have made the situation clearer for the public. (NY Post)

President Trump is no longer contagious, according to his doctor.

“This evening I am happy to report that in addition to the President meeting the CDC criteria for the safe discontinuation of isolation, this morning’s COVID PCR sample demonstrates, by currently recognized standards, he is no longer considered a transmission risk to others,” his physician, Sean Conley, wrote in a memo released by the White House Saturday night.

The memo comes 10 days after Trump first experienced symptoms of his COVID-19 diagnosis and as the president readies to return to the campaign trail.

If the President is satisfied with the medical care he receives from Conley, that’s fine. There’s been no indication that the doctor’s medical competence is in question. But Trump should seriously consider getting Conley a professional spokesperson or at least a speechwriter before he addresses the public on Trump’s behalf. Has the President had a negative COVID test yet? On what did the doctor base this conclusion? We don’t know because, yet again, Conley didn’t say. The only specific factor mentioned was that there is “no longer evidence of actively replicating virus.” This has again opened the door for armchair doctors in the media to suggest that he’s hiding something from the public.

So when do COVID patients actually stop being contagious? Conley seems to be going with the CDC’s guidance on the subject. Their most recent guidelines say that a recovering patient can safely be around other people “10 days since symptoms first appeared and 24 hours with no fever without the use of fever-reducing medications.”

That’s significantly different than the rules offered by the Harvard Medical Center’s doctors. They say that patients “will no longer be contagious by 10 days after symptoms resolve.” (Emphasis added)

For yet another opinion, the World Health Organization previously told us that the quarantine “should continue for at least two weeks after symptoms disappear.” So who are we supposed to believe?

Even if we go by the CDC guidelines, we’re not entirely sure when Trump first began exhibiting symptoms. He was symptomatic and tested positive on Thursday, October 1st. But in retrospect, his medical team suspected that his tiredness on the flight back from the debate on Tuesday, September 29th may have been the actual onset of symptoms. If the latter is the case then ten days would have been up on Friday. If you use the October 1st date, ten days wouldn’t be up until today. If you’re going with either the Harvard or WHO guidelines, it’s still more than a week until the President could be said to be no longer contagious since he was still displaying symptoms (fever and slight cough) on Friday.

It would also be helpful if Conley would say whether or not the President has produced a negative COVID test yet. Filling everyone in on this information would put the public far more at ease and disarm his liberal media critics who continue to treat the President like he’s Typhoid Mary at every opportunity.