RUSH: So I have been watching the hearings for the nomination of Amy Coney Barrett to the Supreme Court. And the initial reaction that you have is that if they had anything on this nominee — and we know they don’t because they fast tracked her through three years ago for her current job on the appellate bench. If they had anything, they would be doing things entirely differently.

The only kind of fireworks we had at her previous hearings were when Dianne Feinstein, who I think it’s only fair to mention is Jewish, said to the very Catholic Amy Coney Barrett: “The dogma lives loudly within you.” The dogma lives loudly within you. Which everybody took it for what it was. It was an assault on Amy Coney Barrett’s religion and how, to Democrats and the American left, it’s entirely unacceptable because it features reverence for God. It features reverence for life. And that’s just unacceptable.

But beyond that, zilch, zero, nada. But before you start getting all confident in everything — I know you’re saying they could be trashing her record right now, and they’re not. Maybe doing all kinds of destructive things that they’re not doing instead of talking about anything and everything but her and her qualifications. They are really ripping into Trump. They are taking the occasion of these hearings to just trash Trump and virtually everything about Trump, from his existence to the fact that COVID didn’t kill him — well, they didn’t do that. Saturday Night Live did.

Did you hear about that? Saturday Night Live actually wished that Trump would have died. I think it was their show open on Saturday. The Democrats have not done that yet. They’re kind of just skating around. But I want to remind you of something, folks. This is exactly how the Kavanaugh stuff started. Kavanaugh had been vetted before for a similar seat at an appellate court seat. And he had been confirmed. And there was nothing new to learn about the guy. There was literally nothing new.

And on the verge of the vote, why, Dianne Feinstein, who’s able to spot Catholic dogma living loudly within people, brought the entire proceedings to a screeching halt by saying, “Wait a minute. I found something here.” And what it was was a letter from a woman who appeared scared to death. Her name was Christine Blasey Ford. It was Christine, right? Was that her first name? We’ve already forgot her first name. We know it’s Blasey Ford. But, anyway, Dianne Feinstein had this letter. This letter was actually sent to Blasey Ford’s congressional representative who then had given it to Feinstein, both from California.

And she read this letter. And it was filled with allegations of the horrible, horrible sexual abuse and mistreatment that Kavanaugh had dished out to Blasey Ford. And so everything came to a screeching halt. We had to have a restart, a new start to the hearings. Oh, my goodness. What have we learned here? How did we miss this? We didn’t know any of this.

They saved it for the last minute. And do not think they are not capable of something here. Everybody thinks they know there’s no way they can stop this. There’s no way. So they’re gonna take the occasion, take the opportunity to rip into Trump, to try to score as many points against Trump as they can, but eventually do what they have to do because they can’t stop. That’s not how they think. They don’t think there’s nothing they can do.

In fact, you may not know this. A Washington, D.C., hotel called a feminist hotel is honoring Ruth Bader Ginsburg with a mural of her likeness made with 20,000 tampons. This is how they honor their own, from demanding free tampons, which, of course, was — what was her name? — Fluke. Right. From demanding free tampons to placing tampons in the men’s room to wearing tampons as earrings on national TV, the left has been showing their obsession with tampons.

Now, if you’re a young child and you’re tuning into the program, I just committed a faux pas. I normally allow for a brief moment for audience members to tune out if they fear something coming up. I warn them. And I did not issue the warning this time. So it may well be that I’ve got myself in a little bit of trouble here. So if you’re a young child that doesn’t know what a tampon is I would suggest you turn the radio off now. Or else go ask your mom. The odds are your mom will know, but not guaranteed. Depends on where you are. Not up to me to explain this.

So I’m gonna count down from five, and after I reach one, if you think this is something you shouldn’t hear, then you should turn the radio either down or off. Do not tune to another station. Wherever you go is gonna be much worse. All right. Five, four — if you don’t do this and I reach one and you’re still offended you have been warned. You can’t complain after that. Five, four, three, two, one. 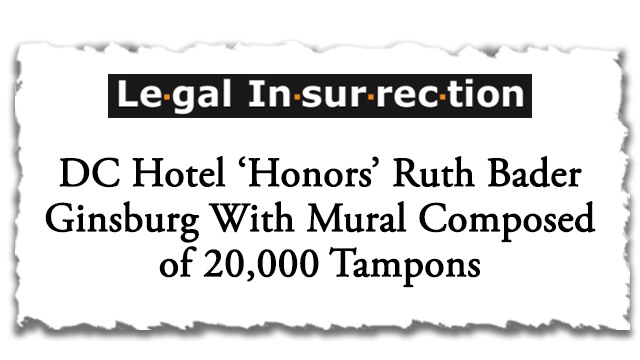 “A boutique hotel in DC has taken the concept of ‘tampon justice’ to a new and disturbing level. The Hotel Zena features an enormous mural of recently deceased Supreme Court Justice Ruth Bader Ginsburg composed entirely of tampons. Twenty thousand of them.”

I mean, is this how they really think they are honoring RBG? She had her own workout regimen. She had her own boxing thing there. She was tough, and they honor Ruth Bader Ginsburg with a mural made of 20,000 tampons? And what do tampons have to do with equality and feminism? Sixty art works that celebrate women’s rights. And of course the RBG mural is one of the 60.

“Installations include a larger-than-life portrait of late Supreme Court Justice Ruth Bader Ginsburg made from 20,000 tampons and a reception desk built out of high heels.” Right. So you go check into this Hotel Zena and you are going to find yourself at a receptionist desk made out of high heels. So do you think it honors Ruth — I’m just asking. Do you think it honors Ruth Bader Ginsburg to remember her, to memorialize her with wadded-up women’s hygiene? I’ll leave it up to you to answer the question. Anyway, just to show what they could possibly have in the quiver of ammo, of arrows.

So, yeah, it may look like if they had anything on her, they would be trashing her record, they’d been doing that instead of talking about anything and everything but her. But with Kavanaugh — and it’s not guaranteed the history will repeat, but with Kavanaugh it was at the last moment when everybody thought we were headed to the vote, everybody thought we were nearing the end, and here came this bombshell from Christine Blasey Ford.

And you remember, it totally turned everything upside down, and they started working on Jeff Flake, and then they started working on a couple of others, and we had a new FBI investigation. We had an allegation that Kavanaugh ran a rape train at a party where Christine Blasey Ford was. But she couldn’t remember where it was. She couldn’t remember any of the people at this thing. It was obviously and totally a setup. 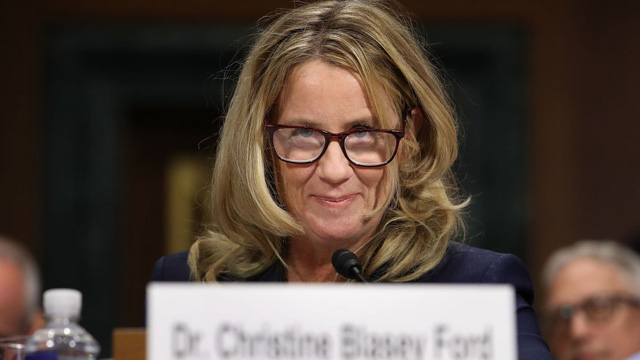 And she had her speech patterns down pat. She had the valley girl uptick at the end of sentences that make a person speaking in this manner seem very scared and traumatized and vulnerable. Now, Christine Blasey Ford’s been teaching out in California, what, 40 years after this happened, 30 years, plenty of time to get over whatever trauma. (imitating Ford) “I — I was scared. I — I — I did not want to be here today. But they dragged me in.” She went on like this, and it was obvious. And the Republicans had no choice. They had no choice but to go along with it.

The president has tweeted about this. And let me find it very quickly. At 10 o’clock this morning the president tweeted, “The Republicans are giving the Democrats a great deal of time, which is not mandated –” The Republicans do not have to be giving these Democrats this amount of time, this nomination, “– to make their self-serving statements relative to our great new future Supreme Court Justice. Personally, I would pull back, approve, and go for STIMULUS for the people!!!”

I’d go ahead and start making a deal. I’d get myself on the right side of that issue and actually do something that might make a difference in people’s lives. That’s what Trump thought the Democrats should do. But they’re not gonna do anything that improves people’s lives if there’s anything about it that Trump can claim any credit for.