Ruth Bader Ginsburg, her face now lit up in 20,000 tampons 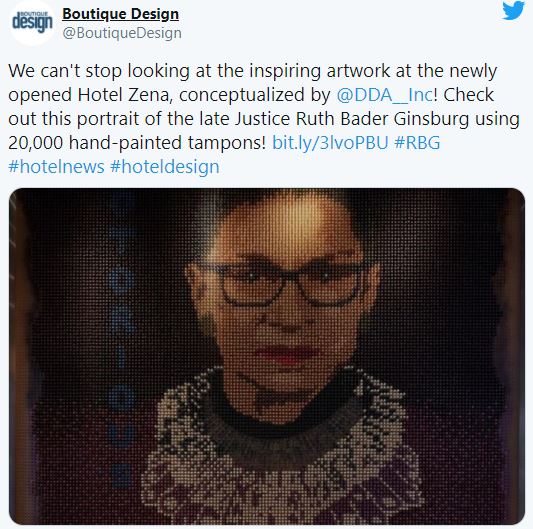 It’s the late Supreme Court Justice Ruth Bader Ginsburg, with her image done up in 20,000 “sustainable and organic” tampons at a newly revamped old motel now called Hotel Zena. That’s not a joke, I did a deep dive into the two artists’ statements and that’s what one of them, Andrea Sheehan, actually said. The entire art collection, complete with a wall of fame featuring Angela Davis, Rigoberta Menchu, Jane Fonda and other icons of the left, as well as women who married their way into money such as Melinda Gates and Michelle Obama, can be viewed here and here. But the tampon art is getting all the attention.

“We then brought on our longtime collaborator, Julie Coyle, who began experimenting with different tampon types to gauge stability. She and her team then created the speciality pegboard filled with nearly 20,000 hand-painted tampons of the ‘notorious’ RBG, notorious for her fearless, and often humorous and controversial, advocacy of women.”

Just what any woman wants, tampon stability and her image up in tampons of various warm colors. Hand-painted, of course, as if this sort of thing could even be done by, to put it delicately, tampon usage, or else machine.

The artists claim it was done with ‘utmost respect’ with Sheehan claiming she got the idea after waking up with tampon ideas filling her head from a dream. But it’s hard to think that even Ruth Bader Ginsburg would personally see it that way. She had a lot of traditional things about her and not just her friendship with the late Supreme Court Justice Antonin Scalia. She liked classical opera, not avant garde post-modern art. She wore an old-fashioned lace collar. Letting it all hang out, which is the leftist message in putting tampons in every viewer’s face, is rather the opposite of that.

Why not use dirty dishrags, or used toilet paper? It’d make about as much sense. In art, context matters. This isn’t really about honoring Ginsburg and how she preferred to present herself, it’s about the left honoring the left and its shibboleths.

Legal Insurrection, which has an entertaining blog about this, notes that the left seems to be utterly obsessed with tampons, wearing them as earrings, placing them in men’s rooms, demanding free ones, as well as coming up with the concept of ‘tampon justice,’ something I don’t think I want to look up whatever it is. Tampons really excite the left.

As far as its art value goes, well, in the past, artists prided themselves on using the finest materials. You don’t get junk paints, you save up and buy pure ones, because you need to have your works last. That concept goes out the windows with the entire composition of this as disposable, biodegradable tampons in Ruth Bader Ginsburg’s face. Maybe the righties will say it serves her right for her political courtroom positions.