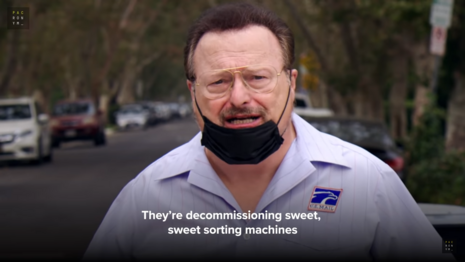 The devious mailman from Seinfeld is back in an anti-Trump ad released Thursday that, while true to the character, sends quite the mixed message.

The ad, starring Wayne Knight, is from the Democrat Super PAC PACRONYM and pushes the liberal conspiracy theory that the Trump administration is intentionally slowing down the mail service to affect the election.

The idea for the ad sounds good in concept, until you actually think about it. Newman, Jerry Seinfeld’s nemesis, is the last person you want people to be associating with the safety and security of their mail-in ballots. It is bizarre to have a character who was infamously incompetent deliver the message that we should trust the post office. In fact, a reminder of the lazy, vengeful government employee from the iconic ‘90s sitcom should be enough to convince anyone to vote in person!

For some reason, the ad plays into that, opening with Newman clutching someone else’s month-old issue of Time magazine where he’s found out that “there’s been a systematic, premeditated assault on the U.S. mail by President Trump and his so-called Postmaster General,” emphasizing how slow and delayed the mail is while further reinforcing the idea that postal employees think nothing of reading through your mail. This is supposed to inspire confidence in them handling your secret ballot – how?

It’s even more counterproductive when Newman is indignant that they have “the unmitigated gall to try to slow down the mail, when everyone knows the only person who can slow down the mail is a mailman!” So that pretty much debunks the liberal “Trump is slowing down the mail” narrative, admitting the problem lies squarely on the USPS’s long-standing practice of being slow and incompetent.

Newman goes on, vowing, “My brothers and sisters and I in blue will do our solemn best to make sure your ballot is delivered” as he rips open a package and steals a cookie out of someone’s mail. Again, the irony is insane!

Newman then gets ticked when two men in black come by and take away the mailbox next to him. “Hey! You picked the wrong government employees to mess with!” he shouts after them.

Then he turns to the camera to directly address President Trump: “Alright, Donnie, you know those tax returns? The ones you don’t want anyone seeing? You should never have mailed those,” before laughing maniacally, letting the audience know the post office is vengefully partisan.

Astounding! I’m left wondering, are they secretly trying to make an anti-mail-in case? It comes off as a parody ad intended to scare people into voting in person.

The message is especially ill timed and tone deaf in light of the recent news of a postal worker throwing away ballots and anecdotal reports of multiple and unsolicited ballots being mailed to voters.

The liberal media narrative has been that U.S. postal workers are salt of the earth heroes and it’s that dastardly Trump who is making them lose their legitimacy. This ad is a reminder that the postal service was viewed as untrustworthy long before Trump came around.