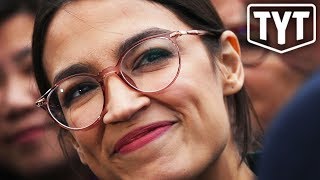 Trump attacked the “Green New Deal”, and AOC fought back, hard. Cenk Uygur and John Iadarola, hosts of The Young Turks, break it down.

‘Sounds like a high school term paper that got a low mark,’ Trump said of the ambitious environmental initiative.

‘Ah yes, a man who can’t even read briefings written in full sentences is providing literary criticism of a House Resolution,’ the freshman congresswoman tweeted in response to the president’s insult. She added a purported quote from a Washington Post report about the president’s aversion to reading his daily intelligence briefing.”