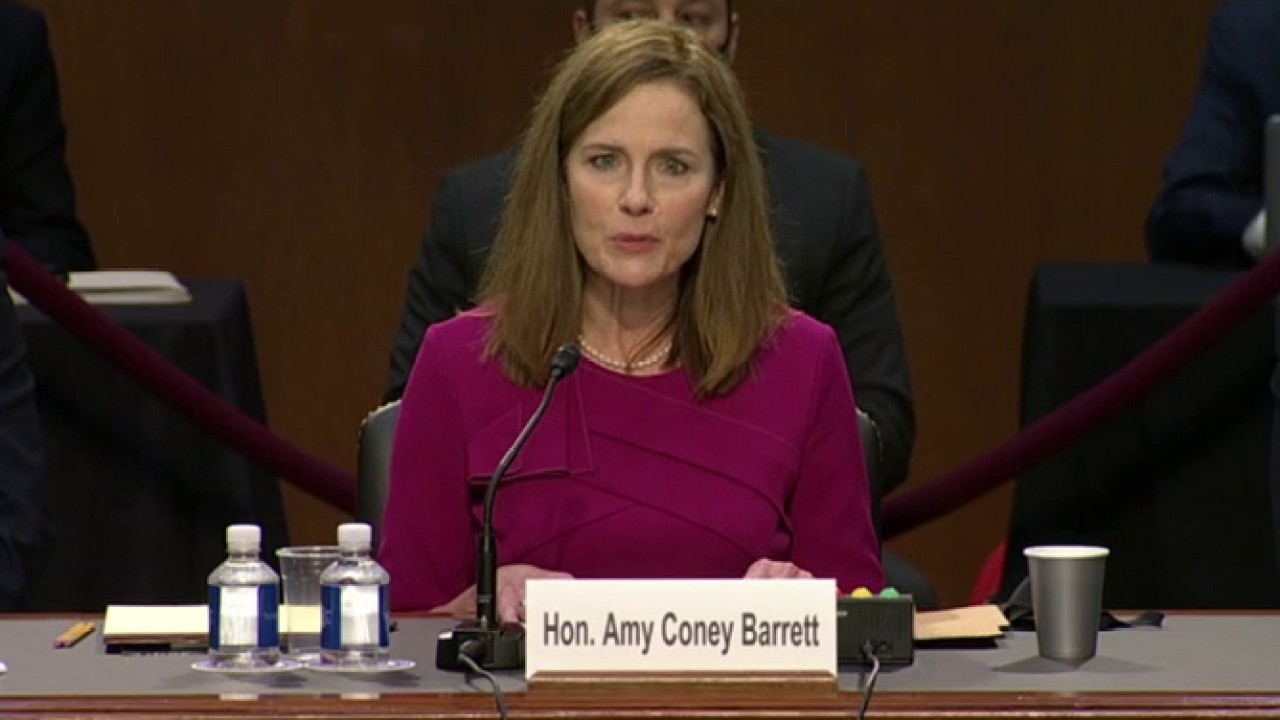 Monday’s portion of the hearing ended before 3 p.m. local time as it consisted of the committee members and Barrett delivering their opening remarks without engaging in any back and forth. That changes Tuesday, which kicks off a lengthy questioning process.

“We begin tomorrow, 30-minute rounds followed by 20-minute rounds. Just do the math, we’ve got a couple long days ahead of us,” Graham said, noting the time allotted in reference to the 22 senators who sit on the committee. “So get some rest.”

Beginning at roughly 9 a.m. Eastern Time, each senator will take their turns grilling Barrett over issues that will likely be related to her background, past judicial decisions, overall judicial philosophy, hot-button legal issues such as abortion or health care, or the man who nominated her, President Trump.

Looking at the first day, it appears that a major part of Democrats’ strategy for opposing Barrett is her past criticism of the Supreme Court’s 2012 decision that upheld the Affordable Care Act, commonly known as Obamacare. One week after November’s election, the Supreme Court will hear a case in which it will determine whether Obamacare is still constitutional now that there is no longer a penalty attached to the individual mandate.

In 2012, the court–in an opinion authored by Chief Justice John Roberts–ruled that the penalty is a tax and therefore is attached to a constitutional congressional power. The Trump administration argues that now there is no penalty, there is no constitutional basis for the mandate and that as a result the whole thing must fall.

Several Democrats, including 2020 vice presidential nominee Sen. Kamala Harris, D-Calif., alleged that Trump and fellow Republicans wanted to hurry up and confirm Barrett so that she can be on the bench to hear arguments in the case as a key vote in eliminating Obamacare for good.

As Law&Crime’s Elura Nanos pointed out, however, this could be a flawed argument given that six of the other justices have records that favor the principle of severability. This means that they could potentially rule that while the mandate is unconstitutional, other parts of the Affordable Care Act could survive.

A look to three years ago could also provide a glimpse at how Democrats may question Barrett. During her 2017 Seventh Circuit Court of Appeals confirmation hearing, she faced questions from Sens. Dianne Feinstein, D-Calif., and Dick Durbin, D-ill., about her religious background and beliefs.

Feinstein criticized Barrett at the time, saying that “the dogma lives loudly within you,” and that that was “of concern.” Durbin asked Barrett if she was an “orthodox Catholic,” borrowing a term Barrett used in a law review article she co-wrote as a student in 1998.

On Monday, Sen. Josh Hawley, R-Mo., defended Barrett from such potential attacks, claiming that they undermine freedom of religion.

“This bedrock principle of American liberty is now under attack,” Hawley said. “That’s what is at stake when my Democratic colleagues repeatedly questioned Judge Barrett and others about their religious beliefs.”