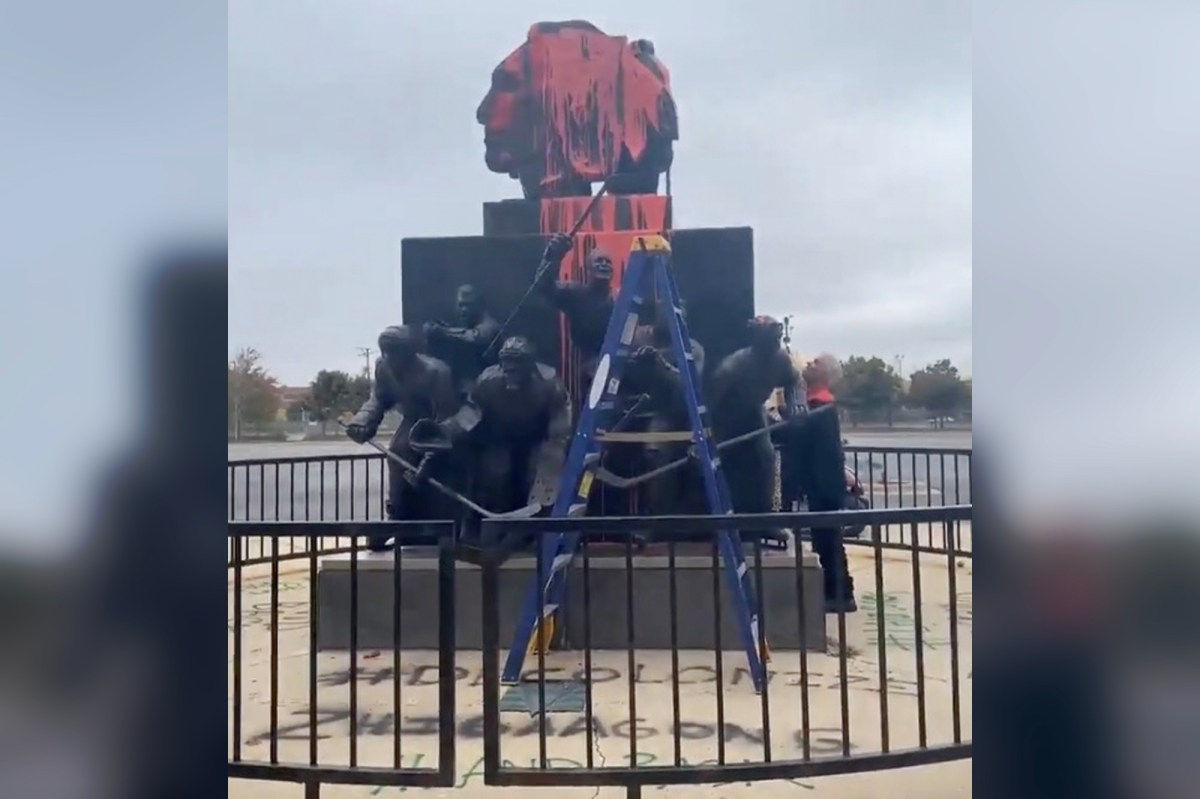 A Chicago Blackhawks statue honoring the Native American leader the NHL team is named after has become the latest target of vandals on Indigenous People’s Day.

But the biggest sign across the base of the statue read “land back,” seemingly timed to support Monday’s Indigenous People’s Day, in opposition to the federal holiday of Columbus Day.

Videos of the graffiti first emerged on a newly made Twitter page called @zhigaagoong, a Native American phrase referring to the land around Chicago — and one of the words sprayed around the statue.

The page, calling itself “No racist mascots,” also posted a video showing a sign outside the stadium reading “We are united against racism” and then panning across to the statue.

“The irony is lost,” the video said, with the message, “We are united against racism [but for racist mascots].”

The statue was put under tarp and “will be sent off to be repaired in the near future,” the Blackhawks told NBC Chicago.

Protesters have repeatedly targeted monuments during months of protests, mostly aimed at those with ties to slavery.

Statues to former Presidents Abraham Lincoln and Theodore Roosevelt were toppled late Sunday during a pre-planned “day of rage” in Portland, Oregon, that police declared a riot.

The Blackhawks insist that the team’s name honors the namesake leader — and in July stressed that there were no plans to follow the example of the NFL’s Washington Football Team in dropping its Redskins nickname.

‘‘We celebrate Black Hawk’s legacy by offering ongoing reverent examples of Native American culture, traditions and contributions, providing a platform for genuine dialogue with local and national Native American groups,” the team said in July, according to the Sun-Times.

Noting there was a “fine line between respect and disrespect,” the team said it was “committed to raising the bar even higher to expand awareness of Black Hawk and the important contributions of all Native American people.”

‘‘We will continue to serve as stewards of our name and identity and will do so with a commitment to evolve.

“Our endeavors in this area have been sincere and multifaceted, and the path forward will draw on that experience to grow as an organization and expand our efforts.’’