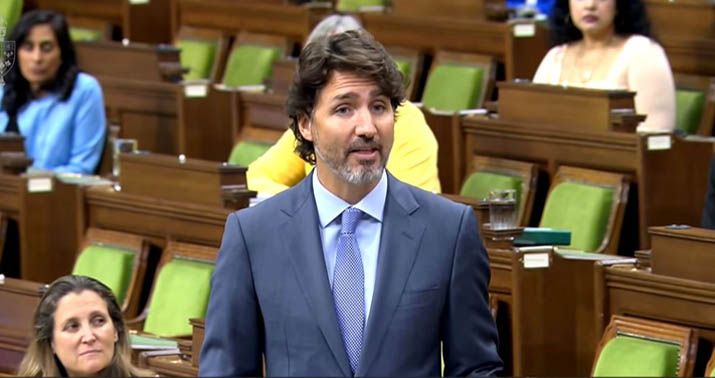 This summer Canadian Prime Minister Justin Trudeau was involved in another scandal, this one involving a charity for young people which had paid members of his family for speeches. In August, Trudeau’s Finance Minister resigned but claimed that had nothing to do with the scandal. And just as all of this was circulating and threatening to dominate the news cycle for several more weeks, Trudeau announced he was proroguing the Parliamentary session so that he could start all over with a new focus on COVID-19.

At the time observers noted that he could have simply waited for the last day of the session and made that decision, instead he did it right when he seemed to be in trouble and needed to change the news cycle.

Parliament is back in session now but the We Charity announced last month that it would shut itself down, in part because of the scandal.

Amid a political firestorm, WE Charity announced last week that it would wind down its Canadian operations…

Amid the political fallout, several of WE’s donors and sponsors severed ties. In a statement Tuesday, WE told Canada’s National Observer the organization “proactively contacted sponsors and mutually agreed to suspend sponsorship agreements.”…

WE will now sell off its real estate assets — worth tens of millions of dollars, with the sales to be handled by commercial real estate company Colliers International — and use the money to create an endowment fund to support its international programs, the charity has said. The fund will be overseen by a board of directors, but it isn’t clear whether that will happen within WE or at a different organization.

Co-founders Marc and Craig Kielburger said they’ll leave the organization, along with the rest of WE Charity’s Canadian staff. That process will take six months to a year, WE said Tuesday, and after that, the charity will “no longer exist.”

So Trudeau’s Finance Minister resigned and the charity itself is going belly up, but by pushing the reset button on Parliament and the investigations it had looking into the scandal, Trudeau himself continues to survive. Last week he made a deal with the NDP to avoid a vote of no confidence:

Canadian Prime Minister Justin Trudeau’s government survived a confidence vote on Tuesday evening, averting the threat of a snap fall election amid a resurgence of the coronavirus in several provinces.

As expected, the government received key support from the left-leaning New Democratic Party on the vote on the “speech from the throne,” the address that opens a new session of Parliament and provides a broad sketch of the government’s agenda…

Trudeau’s claim that he needed to restart Parliament was based on the idea that he was going to present a bold new plan for Canada. What he actually presented was a bunch of vague, warmed over promises from last year:

Trudeau, who was on the defensive for much of the summer during an ethics controversy that had pushed down his approval ratings, made the controversial decision in August to seek the suspension of Parliament. He pledged to return with a “bold” plan for getting through the pandemic and accelerating the economic recovery, which he said he would put to a confidence vote.

The speech, which was short on detail and dollar figures, reiterated several promises made in last year’s federal election campaign and featured others that would require support from Canada’s provinces and territories.

It’s almost as if he didn’t really need to shut down Parliament but only wanted to change the subject. Meanwhile, Trudeau’s Liberal Party with the help of the left-wing NDP, continues to filibuster any attempt to restart the WE Charity investigation:

For a second time, Liberal MPs on the House of Commons Ethics committee have filibustered a vote on a motion to release documents on the Trudeau family’s paid speaking engagements at WE Charity events…

Barrett’s motion would allow the committee to obtain a record of all speaking appearances since 2008 by Trudeau, his wife, Sophie Grégoire Trudeau, his mother, Margaret Trudeau, and his brother, Alexandre Trudeau…

News website Canadaland and other outlets reported that Margaret and Alexandre Trudeau were paid over $350,000 for a combined 36 speaking events between 2016 and 2020. Since then, a number of prominent advocates, including Canadian singer Jully Black, have publicly said they were not paid to speak at WE events…

A motion to reopen the WE investigation was ruled out of order by the chair of the House procedure committee on Tuesday, with Liberal MPs and New Democrat MP Rachel Blaney sustaining the chair’s rule.

So Trudeau and his party are doing a good job of keeping the scandal at bay, at least for now, but recent polling suggests he’s not fooling everyone with this act. The conservatives are now tied with the Liberal Party and seem to have the momentum. This video discussing the polling was published last Friday.