Without Notes, Barrett Takes on Fossils Led by “Leahy Flynt”

RUSH: Well, greetings to you, music lovers, thrill-seekers, and conversationalists all across the fruited plain. Here we are locked and loaded — a little Second Amendment lingo there, sends the Democrats into a tizzy — revved and ready for three hours of broadcast excellence hosted by me, Rush Limbaugh. This, the most-listened-to radio talk show in the country. You want to appear on the program, 800-282-2882. The email address, ElRushbo@eibnet.us. 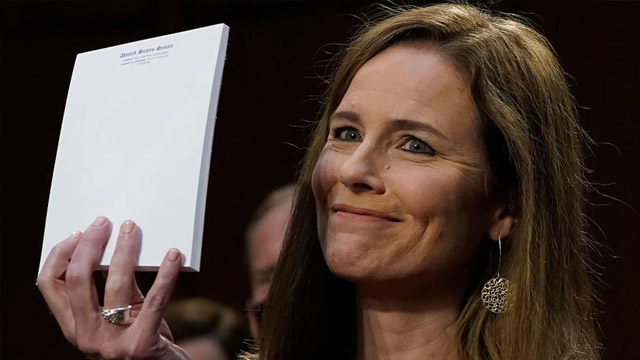 So, I watched some of the hearings today, Amy Coney Barrett. Folks, I don’t know that I’ve ever seen this. I probably have, but I haven’t taken any notice. For some reason I took notice today even before a senator asked her a question. She has literally no notes in front of her. She doesn’t even have — well, yeah, there’s a blank piece of paper in front of her in case she’s gotta make some notes to try to translate some of these questions.

Have you heard Senator Leahy today, Senator Depends? That’s our nickname for the guy ’cause he used to leak like a sieve. Senator Pat “Leaky” Leahy, you know who this guy is sounding like now? He’s sounding like Larry Flynt. (doing impression) “I — I — ha-ha-ha — haven’t been able — 10 years now that — that’s all right.” She asked him to turn up the volume on the TV ’cause he’s not there.

He’s respecting the social distancing and all that for COVID-19. But he sounds like Larry Flynt. You know, this guy, I was taken aback today. “Leaky” Leahy and Senator Dianne Feinstein were sitting there bragging about when they were in college in the fifties, and that’s when I was born. We got two fossils here on this committee and they are the ones obviously with seniority, and they have both taken their turns at Judge Barrett.

And believe me, folks, she doesn’t have a single note. She doesn’t have anything to remind her. She is a teacher in addition to being a judge, and she literally is swatting away these questions. She’s doing it with profound respect. And when I thought that’s what I’d seen — here, put the picture up, Brian. I wanted to make sure that those of you on the Dittocam could see this. Senator Cornyn from Texas asked her to hold up notes that she brought with her, and she held up a blank piece of paper. That’s her right there, if you’re watching on the Dittocam. We’ll have this at RushLimbaugh.com as well.

You know, so she holds this up, blank piece of paper, and in a simple maneuver proves that she is the smartest person in the room. And it was a great thing because it makes that point. Every Democrat senator — probably Republican, too — but certainly every Democrat senator in that room had mountains of notebooks, stacks of paper, file after file after file from which their questions were ostensibly coming.

Senator Leahy, just to give you an idea, Senator Leahy is so old — and I got nothing against age. I mean, you can say I’m old. I’m approaching 70. Senator Leahy is like I think 88. I don’t know what DiFi is, but she’s in that range. But Leahy is so old he has participated in every confirmation hearing for every justice now on the Supreme Court. And Leahy is who they put to replace DiFi. They were running around before the hearings began saying that DiFi is maybe too old and too out of it to do this. 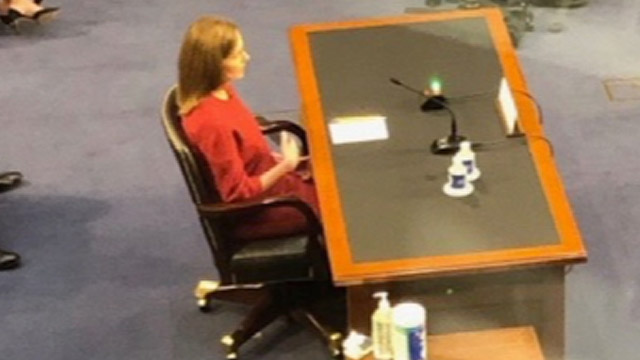 And if they had done that, that would have put Leahy in charge, although I don’t think they could have done that because I think Leahy is chairman of another committee, and you can’t be chairman of two committees at the same time. So I think they would have moved on to maybe to Senator Durbin. I don’t know who’s in line after that.

But, man, folks, it has been a brilliant display of knowledge of the subject. She’s a brilliant teacher, brilliant judge, unflappable. And you know what one of the brilliant things that she has done is invoked previous statements from, say, Justice Kagan. “Well, Justice Kagan said…”

And then she will say, “I remember Justice Ginsburg said this…”

She has just been running rings around them. But, yeah, I like doing the impersonation of Larry Flynt, so I will take the occasion any chance I get.

FEINSTEIN: In Planned Parenthood of Southeastern Pennsylvania v. Casey, Justice Scalia joined the dissent which took the position, and I quote, “We believe that Roe was wrongly decided and that it can and should be overruled, consistent with our traditional approach to stare decisis in constitutional cases.” Do you agree with Justice Scalia’s view that Roe was wrongly decided? 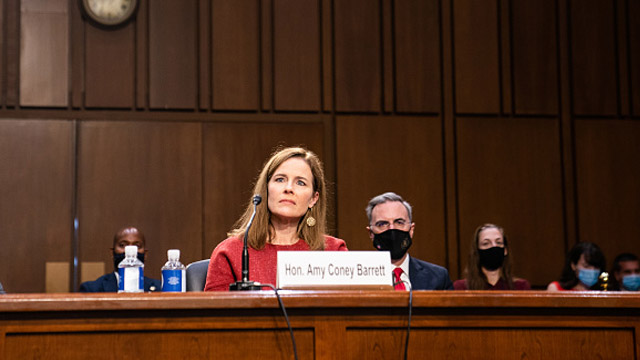 BARRETT: I’m gonna invoke Justice Kagan’s description, which I think is perfectly put. She said that she was not gonna grade precedent or give it a thumbs up or a thumbs down. It would actually be wrong and a violation of the canons for me to do that in violation of a sitting judge.

So citing leftist justices on the court to back up her answer. Really good.

RUSH: So Sheldon Whitehouse, who is a Democrat senator from — I don’t know — Connecticut or he’s from New Hampshire, Rhode Island, wherever. Sheldon Whitehouse. He’s probably one of these guys in high school and college that was just a nerd that ran everybody ragged, irritated ’em. He’s now a United States senator. (interruption) “Rhode Island.” Figures. 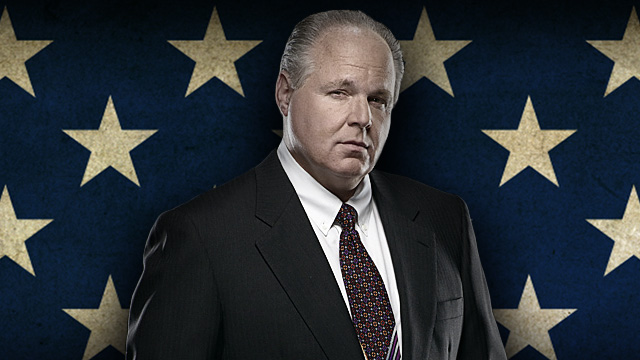 He was going to destroy Amy Coney Barrett. He was gonna destroy Amy Coney Barrett on the subject of dark money. Now, dark money in this case, he wanted to show how (sinister) “There’s a secret network out there that’s getting justices named to the court!” So he puts up the Federalist Society and Leonard Leo. Leonard Leo run the Federalist Society; then he put up another little thing that looks like a pamphlet.

“This is the Judicial Crisis Network, Carrie Severino. (Gasp!) These are evil people out there, don’t you know? Nobody knows about them, and they are cultivating all of these robot conservatives out there to just be conservatives. That’s all they’re doing, and then they have the ear of Trump. Whenever there’s a vacancy, they go here! Dark money sustains this operation.”

Then the third little pamphlet he had encompassed a whole bunch of other legal groups. So, A, it isn’t illegal. It isn’t dark money. There’s nothing untoward about the Federalist Society. You know how to understand why they don’t like the Federalist Society? It’s the same thing as understanding why they hated the Tea Party. The Tea Party was an organic, bubbled-up-out-of-the-American-population political group that had no leader.

They couldn’t control them. So the Democrats went out and created Occupy Wall Street, tried to make it look like it was organic, but it wasn’t. Now here came Sheldon Whitehouse today trying to say that the Federalist Society is some dark money group. The Federalist Society is nothing more than American patriots. To suggest that Democrats don’t have a network of young judges on various courts that are not being groomed for the Supreme Court? 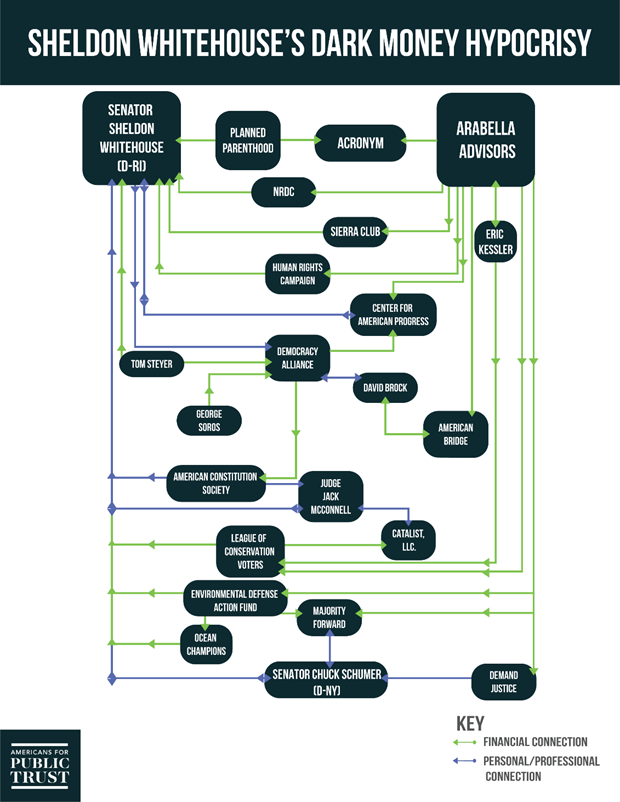 He tries to shame her, to intimidate her into believing she’s the product of dark money. She’s the product of this silent operation to groom little mind-numbed judge robots. He was so frustrated. He questioned Judge Amy Coney Barrett for 30 minutes. Do you know how many words she uttered in the 30-minute Q&A? Zero. He never broke for a question.

I take it back. He did pause, giving her an opportunity to jump in, ’cause he thought that he had set her up. He thought… Sheldon Whitehouse thought that he had prompted her, intimidated her, maybe had roused her up enough that she had to say something. She just sat there. In a 30-minute Q&A, Amy Coney Barrett said not a single word. They can’t touch her. They moved on.

One of the reasons they moved on is because Ted Cruz came along (he was next) and exposed Sheldon Whitehouse’s own dark money network with a chart that actually showed the flow, the institutions and the flow of money that Sheldon Whitehouse has. Sheldon Whitehouse just had a little pamphlet that said “the Federalist Society” with a down arrow to Leonard Leo.

Ted Cruz had the names of the banks.

He had the names of the accounts.

He had all of these various things that tied Sheldon Whitehouse to it.