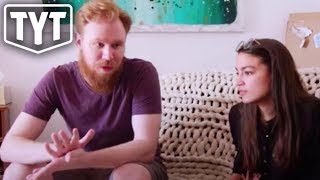 Alexandria Ocasio-Cortez’s boyfriend undergoes a makeover after being bullied with mean tweets. Ana Kasparian, Brooke Thomas, and Stephen Bramucci, hosts of The Young Turks, break it down. MORE TYT: https://tyt.com/trial

“Alexandria Ocasio-Cortez is no stranger to getting flak from the world at large. But now it’s her longtime boyfriend, Riley Roberts, who is under the microscope.

Roberts appears in several scenes in the new Netflix documentary Knock Down the House, which followed Ocasio-Cortez and three other women running for Congress as they hit the campaign trail last year. The redheaded Roberts comes across as the ultimate supportive partner in the documentary, dispensing hugs and “I love yous” as the election results roll in, or wiping away tears while his newly elected girlfriend stands before her new workplace, the U.S. Capitol.

But some viewers were more fixated on Roberts’ physical appearance than his pep talks.

“Apologies for the blatantly mean tweet but THIS is what AOC’s boyfriend looks like? Incredible scenes, truly representing all the ambitious and stunning millennial women shackled to boyfriends who look like bin raccoons out there,” tweeted political journalist Marie Le Conte, who has since deleted the message and explained that she was calling Roberts “scruffy” and not “ugly.”

The term “bin raccoon” soon took a life of its own.”