Hannity Has MELTDOWN Over Alexandria Ocasio-Cortez 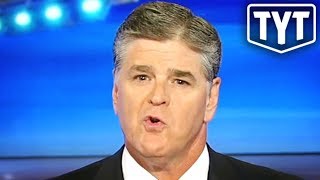 Sean Hannity had a fit on his show about Alexandria Ocasio-Cortez. Ana Kasparian, Brett Erlich, and Aida Rodriguez, hosts of The Young Turks, break it down. JOIN TYT: https://tyt.com/join

“Sean Hannity is losing it over progressive Democrats’ Green New Deal, a policy proposal that would push the country toward 100 percent renewable energy over about a decade.

He is particularly upset about an idea from freshman Rep. Alexandria Ocasio-Cortez (D-N.Y.) to finance the plan by introducing a marginal tax rate of up to 70 percent for the nation’s wealthiest people. Doing so would have dreadful effects on the very rich, Hannity said Tuesday in an at-times nonsensical rant on his radio program.

If wealthy Americans were taxed more ― or, in Hannity’s words, if their wealth were “confiscated” ― “rich people are not going to remodel their homes, they’re not going to build new homes,” he claimed.”