Last week, Freeform’s Kal Penn Approves This Message made the rare decision to invite an actual conservative on to discuss political issues. From there, I was hoping for the show to actually keep its word on being a “non-partisan” election series. Unfortunately, all that ended with its latest effort to shill for Medicare For All. 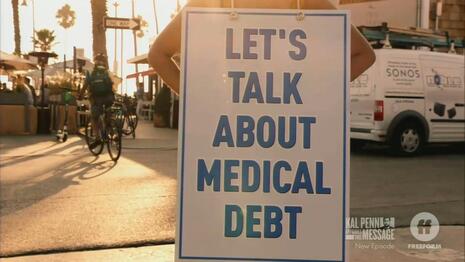 The October 13 episode “Kal Penn Approves Healthcare” has Kal Penn discussing healthcare issues in the United States. While he’s correct in addressing it as a serious issue for voters, as usual, he veers off from what could be considered “non-partisan.” He starts off by describing the Republican and Democrat position on healthcare but then not-so-subtly introduces the value of universal healthcare:

Citizens in a lot of wealthy countries have suffered major job losses. But most of them are not losing their health insurance because they have a publicly funded universal healthcare system. They have a card that they show when they go to the doctor or a hospital and most of their basic medical needs are covered. They almost never see a medical bill. It’s all paid for through taxes. And even if they lose their job, they keep their insurance. So these countries have voted for and chosen these systems. They’ve decided that equal access to healthcare is a major priority.

Following that, he introduces a comedy sketch (and I use that term loosely) featuring Rehka Shankar diving into healthcare costs. In the sketch, she interviews various people and decides that someone needs to take “the best parts of a government healthcare plan and expand[] it to cover everyone,” whether they want it or not. She takes her idea to famous businessman Mark Cuban who informs her that the idea already exists under Medicare For All.

Rehka: This all got me thinking: Why hasn’t anyone ever taken the best parts of a government healthcare plan and expanded it to cover everyone? Not just for those who want it, but for all? I needed support to get this program off the ground. So I went to one of America’s leading businessmen. Um, I hope your assistant forwarded the PowerPoint I sent you. I know it was long. But, um, you took a look?

Mark Cuban: I’m just gonna be honest. While I really appreciate your enthusiasm, I don’t understand what you’re talking about.

Rehka: Okay. [Chuckles] Sorry if I wasn’t clear, but I’m solving our healthcare crisis, Mark. It’s a GoFundMe for All. Instead of everyone randomly paying for healthcare crowdfunding, we are setting up a system where we all buy in and so healthcare costs decrease overall.

Mark Cuban: So basically Medicare for All?

Rehka: What is that? What’s Medicare for All?

To top that all off, the episode ends with Kal interviewing progressive activist and ALS patient Ady Barkan. For those unfamiliar with him, Barkan came into the spotlight after confronting Senator Jeff Flake on a plane for voting for the Trump tax bill in 2017. Since then, he’s been pretty open about his politics and what he thinks of our “racist, sexist, kleptocrat” president. Even for this interview, he’s still clear on his liberal beliefs by directly pushing for Medicare For All.

Ady Barkan: That is an excellent question, but the embarrassing truth is that we don’t have enough good youth organizations focused on healthcare. There are definitely groups in your town or college, and you can find them online. But it is a weakness of our movement that I can’t point you to one great place to get started.

Kal: Do local and state politics have an impact on healthcare?

Ady: State and local governments play a really important role in providing healthcare. So it’s definitely important to elect people who believe that healthcare is a human right and will fight to make sure everyone gets the care they need regardless of their ability to pay.

Kal: Why is Medicare for All important to you?

Ady: Medicare for All is the most commonsense, simple, and fair way to pay for healthcare and to guarantee that everyone gets the care that they need. When you’re sick, you should not have to worry about how to pay the doctor or the ambulance company.

For a show that wants to address both sides, it seems like the only solution Kal Penn can come to is universal healthcare. Since Medicare For All also happens to be the plan of democratic socialist Bernie Sanders, it doesn’t take a genius to figure out where this show leans.

Although Medicare For All is mentioned or alluded to no less than three times in this episode, we get none of its downsides. There’s no mention of the inevitable drop in healthcare quality or the potential for rationing healthcare. They don’t want to talk about how everyone with private insurance would lose their plan or how the astronomical expense would bankrupt our budget. There’s not even a hint of the observable fact that nations with universal healthcare like Italy and China performed terribly in the midst of the coronavirus outbreak. Perhaps the U.S. could do better regarding healthcare, but Medicare For All is hardly the best answer.

Kal Penn may approve of this message, but he can’t change facts, no matter how much he wants Trump out of office.

This show was sponsored by commercials from L’Oréal, Chewy, and Subway.