On the first day of the Barrett hearing, Democrats were truly awful 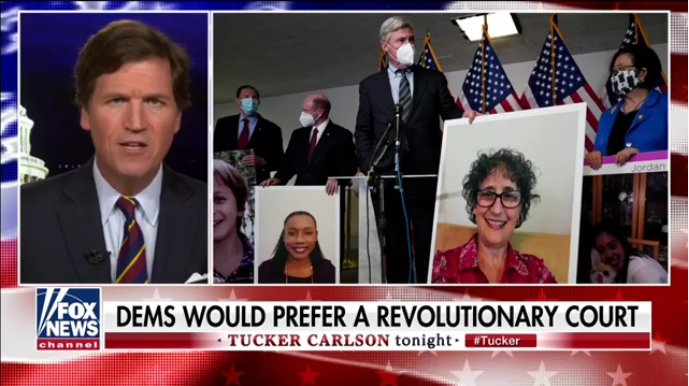 The goal here was a not very different from the goal during the Kavanaugh proceedings.  In 2018, Democrats had worked hard to diminish Justice Kavanaugh’s standing.  As Christine Blowsy-Fraud’s lawyer later said, Blowsy-Fraud’s testimony wasn’t about keeping him off the Court.  Instead, it was about putting “an asterisk next to” his name before “he takes a scalpel” to Roe v. Wade.  And if you’re like me, you find it grotesque to use the phrase “takes a scalpel” as a way of showing outrage that anyone would walk back a decision that resulted in 61 million American abortions.

In this case, the Democrats opened not by attacking Barrett (although they did that, too).  Instead, they repeatedly attacked the proceedings themselves, saying  they were a sham and therefore illegitimate.  They also invoked Ruth Bader Ginsburg, as if she were a saint rather than a government employee who misused her power.  These attacks had a purpose.  Beginning in 2021, whatever happens next, whether the Democrats win and pack the Court or lose and decide not to abide by its rulings, the foundation will have been laid at this nomination hearing: a Court with Amy Coney Barrett on it is no Court at all.

Because the Democrat senators knew they could not possibly make the case that Barrett belonged to a rape gang while in high school, they had to demean her in a different way.  They ultimately decided to paint Barrett as a mass murderer.  Doing this required striking a fairly delicate balance.  Barrett is openly pro-life, which means she opposes the slaughter of those 61 million innocents who have been aborted since 1973.

The avenue for painting the mild-mannered mother of seven as a person barely better than Ted Bundy was to say, in effect, that she was going to murder Obamacare and, by doing so, kill women and children.  The hook for this argument can be found in the fact that the Supreme Court will hear an Affordable Care Act case on November 11.  The pivot for that case is the 2017 legislation doing away with the tax penalty that was the mechanism Obamacare used to force people to buy insurance.

It was this penalty that had allowed Chief Justice John Roberts to say Obamacare was a tax plan and therefore within Congress’s power to pass.  As you may recall, whether or not it was a tax was important because Congress engaged in some procedural shenanigans that meant it had the authority to pass the bill only if the House was exercising its constitutional power to levy taxes.  By pretending the mandate effectively turned the entire bill into a tax, Roberts saved it from the rubbish bin.

With the penalty gone, several states sued, arguing that, without the tax penalty, the mandate portion of the bill collapsed entirely.  They also argued that, because the mandate is inextricably intertwined with other portions of the bill, the mandate’s failure must mean that the entire bill fails.

Because Barrett has argued in the past (correctly) that Roberts’s decision was wrong, the Democrats are pretty certain that Barrett will side with those justices who want to reverse the Obamacare legislation.  For that reason, they trotted out whole hosts of pictures of people who will die if Barrett is on the Court.

Then, with voices shaking, multiple senators effectively accused Barrett of plotting mass murder.  It was despicable, and it also once again turned the Supreme Court into a political instrument for the Democrat party.

The problem for Democrats is that, outside their base, most American people don’t want their legislation.  The only way they can achieve their political goals, whether those goals are Obamacare, same-sex “marriage,” or abortion, is to have an activist Court that first decides upon a politically desirable outcome and then contorts either the facts or the Constitution to achieve that outcome.

When choosing a Supreme Court nominee, there are just a few questions that need to be answered.  The Senate needs to know that the person is smart, free of corruption, knowledgeable about the law, and respected both inside and outside the courtroom, and whether he fully understands the limited role a judge should play in American society and, especially, in American politics.

Rather than leaving you with a hodgepodge of short videos showing how despicably the Senate Democrats behaved, I’m going to leave the rest of this post to Tucker Carlson, who ably explains what’s at issue and focuses on the more loathsome senators: